You are here: Home / Archives for Mackey

In this installment of Symbols & Symbolism, we look at a reading from Albert G. Mackey’s Encyclopedia of Freemasonry on the Christening of Freemasonry, a sentiment that Mackey feels “… does not belong to the ancient system” of Freemasonry.

You can read more installments of Mackey’s Encyclopedia under Symbols & Symbolism here on this site and video of these segments on YouTube.

The interpretation of the symbols of Freemasonry from a Christian point of view is a theory adopted by some of the most distinguished Masonic writers of England and this country, but one which I think does not belong to the ancient system. [William] Hutchinson, and after him [George] Oliver – profoundly philosophical as are the Masonic speculations of both – have, I am constrained to believe, fallen into a great error in calling the Master Mason’s Degree a Christian institution. It is true that it embraces within its scheme the great truths of Christianity upon the subject of the immortality of the soul and the resurrection of the body; but this was to be presumed, because Freemasonry is truths and all truth must be identical. But the origin of each is different; their histories are dissimilar. The principles of Freemasonry preceded the advent of Christianity. Its symbols and its legends are derived from the Solomonic Temple and from the people even anterior to that. Its religion comes from the ancient priesthood; its faith was that primitive one of Noah and his immediate descendants. If Masonry were simply a Christian institution, the Jew, the Muslim, the Brahman and the Buddhist could not conscientiously partake of its illumination. But its universality is its boast. In its language citizens of every nation may converse; at its altar men of all religions may kneel; to its creed disciples of every faith may subscribe.

Yet it cannot be denied that since the advent of Christianity a Christian element has been almost imperceptibly infused into the Masonic system, at least among Christian Masons. This has been a necessity; for it is the tendency of every predominant religion to pervade with its influence all that surrounds it or is about it, whether religious, political, or social. This arises from a need of the human heart. To the man deeply imbued with the spirit of his religion, there is an almost unconscious desire to accommodate and adapt all the business and the amusements of life – the labors and the employments of his everyday existence-to the indwelling faith of his soul.

The Christian Mason, therefore, while acknowledging and appreciating the great doctrines taught in Masonry, and also while grateful that these doctrines were preserved in the bosom of his ancient Order at a time when they were unknown to the multitudes of the surrounding nations, is still anxious to give to them a Christian character; to invest them, in some measure, with the peculiarities of his own creed, and to bring the interpretation of their symbolism more nearly home to his own religious sentiments.

The feeling is an instinctive one belonging to the noblest aspirations of our human nature; and hence we find Christian Masonic writers indulging in it to an almost unwarrantable excess, and, by the extent of their sectarian interpretations, materially affecting the cosmopolitan character of the Institution.

This tendency to Christianize has, in some instances, been so universal, and has prevailed for so long a period, that certain symbols and myths have been, in this way, so deeply and thoroughly imbued with the Christian element as to leave those who have not penetrated into the cause of this peculiarity, in doubt whether they should attribute to the symbol an ancient or a modern and Christian origin. 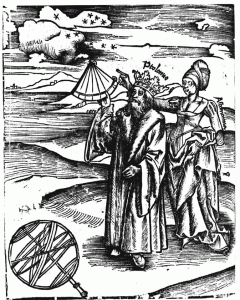 The rite of circumambulation is perhaps the most overlooked of all Masonic rituals. This action is an inherent part of almost every Masonic degree and plays a critical role in the three degrees of the Symbolic Lodge. However, few Masons have ever truly examined this ritual or its symbolism. Even a short inquiry into its purpose will reveal that the rite of circumambulation is among the most universal and widely practiced religious rites in the world.

When I became a Freemason, my excellent Masonic mentor explained that the reason I was conducted once around the lodge (or circumambulated the lodge) was to allow the three principle officers to observe that I had been properly prepared and was worthy to receive the degrees of Masonry. That is a correct explanation, but it is only a functional explanation. The truth is that the purpose of circumambulating the lodge has a greater symbolism.

Albert Mackey links the Masonic rite of circumambulation to the practices of the Greeks and Romans who used it as part of their sacrificial rites. Mackey hypothesizes that this was done to imitate the movement of the sun from the east to the west by way of the south. He claims that this is the influence of the pagan mysteries on what he calls the “Spurious Freemasonry of Antiquity.”1 While we will avoid discussing the concept of Spurious Freemasonry in depth, it will be enough to explain that Mackey speculated that the ancient pagans practiced a form of Freemasonry which was tailored to fit their spiritual beliefs. However, a look at the use of circumambulation in the world’s major religions will give us another perspective.

In the Old Testament, God ordered the Israelites to complete a circumambulation during the siege of Jericho.

“Then the LORD said to Joshua, ‘See, I have delivered Jericho into your hands, along with its king and its fighting men. March around the city once with all the armed men. Do this for six days. Have seven priests carry trumpets of rams’ horns in front of the ark. On the seventh day, march around the city seven times, with the priests blowing the trumpets. When you hear them sound a long blast on the trumpets, have the whole army give a loud shout; then the wall of the city will collapse and the army will go up, everyone straight in.’”
Joshua 6:2-5

Let us take a look at a verse from the Old Testament, which can also be found in the Fellowcraft Degree:

The heavens declare the glory of God and the firmament showeth His handiwork.
Psalm 19:1

Astronomy has long been a part of every religion. Often, the movement of the stars and constellations is seen as a representation of God. The act of admiring his creation is among the purest forms of worship. Therefore, it is no surprise that the rite of circumambulation appears in our lodges. The act of replicating the movement of the heavens around the lodge—which we are told in the first degree is representative of the universe—is among the most time-honored methods of appreciating God’s great creation.

Masons often work to improve lodges by performing a number of tasks. Many actions have been taken or proposed in order to create better lodges and much debate has taken place about the proper way to improve Masonic lodges. However, in order to improve a lodge it is important that Masons take a step back and consider just what the term lodge means.

Mackey gives three definitions of the term lodge in his Encyclopedia of Freemasonry. The first definition is “a place in which Freemasons meet.” The second refers to the congregation of members which constitute the lodge. This definition compares the term ‘lodge’ to the term ‘church’ which refers to both the members of the organization and the building. The final definition that Mackey creates says that “the lodge, technically speaking, is a piece of furniture made in imitation of the Ark of the Covenant.” Mackey states that as the Ark contained the law of the Hebrews, the lodge contains the Book of Constitutions and the lodge’s warrant.1

Mackey’s definitions are somewhat different than the definition given in Masonic ritual:

The lodge is composed of a constitutional number of Masons, duly assembled, with the Holy Bible, square and compasses, and a charter or warrant empowering them to work.

So perhaps the literal definition of the word ‘lodge’ may be: an assembly of Masons with a warrant to work by a recognized grand jurisdiction or a word which refers to the meeting place of a group of Masons.

However, the lodge also has a symbolic meaning. Carl H. Claudy says:

The lodge is a symbol of the world. Its shape, the “oblong square” is the ancient conception of the shape of the world. The Entered Apprentice is taught its dimensions, its covering, its furniture, its lights, its jewels, and will learn more of it as a symbol as he proceeds through the degrees. Although a symbol of the world, the lodge is a world unto itself; a world within a world, different in its customs, its laws, and its structure from the world without. In the world without are class distinctions, wealth, power, poverty, and misery. In the lodge all are on a level and peace and harmony prevail.

Considering Claudy’s explanation of the lodge as a symbol, it is clear that the lodge has little to do with the brick and mortar of which the building is composed. The lodge is a peculiar society, a Brotherhood which is able to live by the Utopian ideals that the profane world can never realize

Instead, the focus must be on improving the Brotherhood through the self-improvement of its members and the relief of its distressed.

A lodge is at least seven Masons with a warrant empowering them to meet and to practice Masonry. It is no more, it is no less. In order to improve the lodge, we must improve the Brothers which constitute that body. That is the only path to improving Masonic lodges.

END_OF_DOCUMENT_TOKEN_TO_BE_REPLACED

Raised to a Master Mason in 1908, at Harmony Lodge No. 17 in Washington, DC, Carl H. Claudy  served as the Master and eventually as Grand Master of Masons … END_OF_DOCUMENT_TOKEN_TO_BE_REPLACED

In this final installment of the Faith Hope and Charity series, we consider the symbolism of charity, or perhaps better called love. It is this attribute that … END_OF_DOCUMENT_TOKEN_TO_BE_REPLACED

In this installment of the Symbols and Symbolism of Freemasonry, we examine the text of Albert Mackey's Encyclopedia of Freemasonry on the symbolism of … END_OF_DOCUMENT_TOKEN_TO_BE_REPLACED

In this installment of the Symbols and Symbolism of Freemasonry, we consider a reading of Albert Mackey's text on the subject of Faith as it pertains to … END_OF_DOCUMENT_TOKEN_TO_BE_REPLACED