You are here: Home / Archives for Masonic Renewal

The peak of 20th Century Mainstream Freemasonry membership is generally conceded by Masonic scholars to be 1946-1960. After that things went steadily downhill and we are not just talking about membership.

It has been a long time hypothesis of mine that the Vietnam War was the principle culprit of the 60s and 70s decline of Freemasonry. The feel good, drop out culture had a lot to do with dissuading anybody from joining anything. Freemasonry wasn’t the only one to suffer. Other Fraternal Societies, churches, ethnic clubs, sewing circles, literary guilds, agricultural Societies – you name it, they all withered and dried up. Some went belly up and others just struggled along at half speed.

If the hypothesis holds true then FREEMASONRY SKIPPED A WHOLE GENERATION. The history of Freemasonry shows that about every 20 years or so the Old Guard would be replaced by the New Guard. You could in that time period see a total transformation of leadership with the corresponding vitality that youth brings.

But when the Masonic leaders of 1940-1960 were not replaced because membership lagged significantly, what happened is that the Forties to Sixties leaders did double duty; they stayed on for another tour through the Sixties and Seventies. Thus Mainstream Freemasonry had the same leadership from 1940-1980 (of course there was a trickle of new blood replacements).

This had some really bad effects on Freemasonry. The older leadership was less ambitious. Craft Lodge members withdrew into a comfort zone of inactivity. They became Isolationist Freemasons. Degrees were seldom performed. Masonic education was something that was felt to be unneeded. If you were 80 years old and you didn’t know it now, then you never would.

Just like my Grandfather who perpetually failed to understand why things cost so much more when he was 80 then when he was 20, Craft Lodges couldn’t understand the need for raising dues, so they froze them. For many years, retired seniors living on fixed incomes and who were a Lodge’s voting majority artificially held down the cost of maintaining Masonic membership. In the process they strangled the finances of a Lodge. Masonic programs, lavish social events and well attended ceremonies had to be cut or eliminated. Masonic buildings suffered in decay as funds to repair and maintain them were lacking.

Most of the officer’s chairs were occupied by Past Masters. Masonic Communications most often consisted of a business meeting followed by a collation of baloney sandwiches and coffee with the consistency of molasses. The sad part to all this is that Lodges met without practicing Freemasonry.

Such a picture is a bit of an exaggeration. There were many fine Lodges that did great work, just not enough of them. The inability to provide a great Masonic experience made it difficult to attract new members.

Somewhere along the line Grand Lodges woke up and realized that something had to be done. Unfortunately sometimes the cure can be worse than the disease. Grand Lodge responses of jurisdictional mandates, relaxed standards, Institutionalized charity and One Day Classes brought in some quantity without the quality. Now we had a flock of Masons in name only – MINOs. And some MINOs assumed positions of Masonic leadership.

When the Information Age hit and every household started to get a PC, the Masonic response was archaic and self-defeating. Instead of embracing the new technology they dismissed it or banned it. When they finally admitted that they were wrong, instead of employing outside professionals it became in house amateur time. 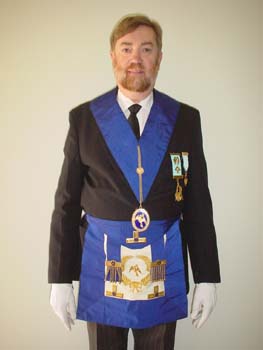 Some in the Craft were muttering enough is enough. Along came an Australian Mason in named Kent Henderson and the Masonic reform movement was born in 1992.

Oh, I’m sure there were some noteworthy earlier contributors but Henderson wasn’t just a talker he was a doer. In 1993 he, with 34 others, formed Lodge Epicurean based on the European Concept. When Henderson wrote his paper explaining the European Concept – BACK TO THE FUTURE: A prescription For Masonic Renewal – he spread the word to the United States and beyond.

The Creation of Lodge Epicurean

In early 1992, a group of mostly young (but Masonically experienced) freemasons living in Victorian provincial city of Geelong, lamenting the state of the Craft, decided to do something about it in a practical way. They determined to form a new lodge which would be quite different in a great many ways to others working under the Victorian Constitution. Lodge Epicurean, as they named it, would be a top quality lodge, with the highest standards. Anything not consistent with such high standards would be discarded.

It was decided to form the lodge on Two Great Pillars, which are as follows:

(a) GETTING MEMBERS. Only an existing member can propose a candidate. We suspected that the reason why members did not repeatedly propose candidates, if ever, was because they either consciously or sub-consciously did not think their friends would be interested. There are probably a variety of reasons for this, but one is probably fear that in the event that their friends do not like the lodge, their friendship might be affected. Members these days are rarely proud of the standards of their lodges. However, if a lodge has very high standards, members do not hesitate to ask their friends to join. This is the secret of gaining new members, and lots of them.

(b) KEEPING THEM. A high quality lodge will greatly assist in holding new members in the longer term, but this is still not enough. There are other social organizations that offer quality. Freemasonry has one great thing more to offer, available nowhere else — freemasonry! But what is it? It is not a charitable organization like Rotary or Lions (though some would make it out to be), although charity is an important part of its teachings. Masonry is first and foremost an education society, one which TEACHES moral and ethics – a way of life. Secondly, Masonry is a universal brotherhood, with all that implies. Thus, what a lodge must do is teach. Exposure to the three degrees is but the beginning. What a lodge must understand is the overriding reason why a brother will sit in a Masonic lodge in the medium to long term is because he knows exactly why he is sitting there. The answer to keeping them, therefore, is to give them quality, and to concurrently educate them in Masonry.

The word was picked up in Texas where a European Concept Lodge was formed in College Station,  St. Albans Lodge No. 1455, founded in 1992 by Pete Normand and elsewhere about the U.S the most notable being in Indiana. In a popular Internet Indiana Masonic Forum much discussion led Jeff Naylor, Chris Hodapp and Nathan Brindle, among others, to form the Traditional Observance (TO) Lodge, Lodge Vitruvian and to publish the American version of BACK TO THE FUTURE, LAUDABLE PURSUIT with due homage to Past Grand Master Dwight Smith.

Lodge Vitruvian operates under what has come to be known as “The European Concept” as popularized by Lodge Epicurean, among others, in Australia.

The European Concept is known for its dedication to a number of primary tenets:

Fast forward a short time to the founding of the Masonic Restoration Foundation where TO Lodges nationwide were encouraged, aided and networked. President Dennis Chornenky in his paper THE TRADITIONAL OBSERVANCE LODGE, once again makes clear what is being promoted.

While many Masons may have heard about European Concept lodges, which are themselves a relatively new concept in American Freemasonry, few have heard of the Traditional Observance lodge. Traditional Observance lodge s are similar to European Concept lodges in that they also incorporate higher dues, festive boards, a strict dress code and higher standards of ritual, but differ in that they choose to follow a close observance of the traditional initiatic elements of Continental European and South American Freemasonry.

This observance is characterized by a solemn approach to holding stated communications and conferring degrees, the use of the Chamber of Reflection as part of the initiation ceremony, forming the Chain of Union after the meetings, longer time between degrees and the requirement for candidates to present a paper before the lodge on the lessons of each degree prior to advancement. Traditional Observance lodges are also more likely to use the term Agape rather than Festive Board to describe the meal which follows the meetings. Agape is the ancient Greek word for “love,” and in Freemasonry the term signifies a meal eaten in common by a congregation of Masons in token of Brotherly Love.

TO Lodges, while they continue to grow, have never really caught on to the point that they can be found neither in every state nor in abundance anywhere.

All this serves as background information for what follows. In Part 2 to this article we will explore alternatives to the TO concept that can be adapted to existing Lodges.

END_OF_DOCUMENT_TOKEN_TO_BE_REPLACED

In this final installment of the Faith Hope and Charity series, we consider the symbolism of charity, or perhaps better called love. It is this attribute that … END_OF_DOCUMENT_TOKEN_TO_BE_REPLACED

In this installment of the Symbols and Symbolism of Freemasonry, we examine the text of Albert Mackey's Encyclopedia of Freemasonry on the symbolism of … END_OF_DOCUMENT_TOKEN_TO_BE_REPLACED

In this installment of the Symbols and Symbolism of Freemasonry, we consider a reading of Albert Mackey's text on the subject of Faith as it pertains to … END_OF_DOCUMENT_TOKEN_TO_BE_REPLACED

In this edition of Freemason Information’s Symbols and Symbolism we consider, together, the four cardinal virtues of Freemasonry as gathered form Albert … END_OF_DOCUMENT_TOKEN_TO_BE_REPLACED