You are here: Home / Archives for Mitch Horowitz

and am a bit surprised at the story it tells, and some of what it doesn’t.

Only recently did I come across the 2010 Bantum Books edition, (the first edition published in hardback in 2009) and it was the sub headline of the books title Occult America: White House Seances, Ouija Circles, Masons, and the Secret Mystic History of Our Nation

, that grabbed me, making an interesting premise to open the cover and start reading the book.

Once started, it delivers – developing a body of ideas creating an evolution of thought influenced in an era before the Catholic witch trials of Cagliostro and began in the new world with the voyage of the Quaking Shaker Ann Lee (later to re-dubbed Mother Ann) who traveled from Manchester in 1774 to New York with a cohort of 8 followers who together cobbled resources to form a small religious colony in Niskayuna near Albany.

Horowitz takes on a daunting task, the challenge of not sounding encyclopedic and pulling a variety of disparate pieces of Americana together to tease this occult history out from the facts.  In some ways, the telling of Occult America mirrors the troubled story of Mother Ann that Horowitz introduces us to in the opening of the book, inauspiciously to the unintentional spread of ideas everywhere.

So as not to ruin the fun of discovering the secret history for yourself Occult America links together a progression of thought, in an age not known for its wide degree of communication, that at its present day apex has shaped the widest segment of religious and spiritual thought to such a degree that, Horowitz suggests, shaped the 1980 to 2001 “Be all you can be” slogan of the U.S. Army as a mantra of sorts to the ultimate of New Thought self development.  His suggestion is that many aspects of the New Age philosophy (what was at first called “New Thought”) have become integral to much (if not most) of out day to day life.

Just a few of the ideas that were at one point considered occult include the evolution of human consciousness, the connection of the mind-body-spirit health, and the ever growing trend of people moving (which data supports) away from organized religion to pursue instead a spirituality.  All of these various aspects, he says, have a root in the developments of the past 200 years through this subculture of Americana.  For those who may not remember, even the Scottish Rite Journal was titled the New Age for many years and represented a fraternal flag ship to the movement.

In some respects, you could bookend Occult America with Jeff Sharlet’s The Family

because as the Family chronicles the rise of the Fundamentalist religious right, Horowitz traces a line through the various sub culture movements that transmitted one idea to the next movement and so on.  As a Masonic reader you will be interested to know that at points he acknowledges the presence of Freemasonry as well as other esoteric/occult groups as major players to the dissemination of ideas.

What the book doesn’t do, which might be a product of necessitating many more pages, is chronicle the earlier presence of occult ideas that at the time were a regular part of the American landscape.  For instance, it’s impossible to look at the early American development without seeing Freemasonry (Washington was inaugurated on a Masonic bible which speaks to its presence) as a major contributor in many earlier instances.  Horowitz does touch on this earlier history, but he starts his telling with the founding of Mother Ann’s religious Shaker colony and its promulgation of ideas forward. 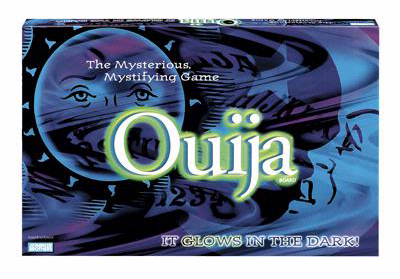 One of the more entertaining chapters that I enjoyed was the lineage of the Ouija Board, started in the age of séances and the selling of spiritualism.  He makes a very good case for how the rapping tables and automatic-writers of the burgeoning psychic era moved from formalized sitting room sessions to game boards made by Hasbro (now Glow in the Dark) to sit between two kanoodling lovers knees playing slide the planchette.

(I did stumble across a cool glass topped octagonal Tree Of Life Ouija board that’s worth looking at here.)

You can almost sum up the history of the Occult in America in the story of the Ouija Board, from the home spun to the highly processed and manufactured message, but to do so would omit so much of the rich history that the Occult has traced through America, and Horowitz has really captured in an album of snapshots of our esoteric landscape starting with Mother Ann, who was at the time called by her followers “Christ returned in female form.”

as a fun and light read into the heavy and often deeply woven history of the New Thought/New Age America we live in today.