You are here: Home / Archives for Morgan scandal 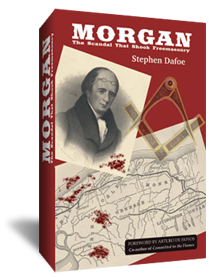 American history is intricately tied to the history of Freemasonry.

One such crossroad was the Anti-Masonic Party that dominated early American politics between 1827 and 1838. But where did the Anti-Masonic party find its inspiration? When you dig into the shadows and rumors of the past, the answers start to take shape in a jig-saw puzzle of post colonial American life, politics, and scandal. And in those hidden recesses, the real story begins to emerge.

Important to say is this early political party did not form out of a passing distrust of Freemasonry, but rather from a tragedy that is today known as The Morgan Affair.  At the center, William Morgan, was a man of many trades with a reputation that preceded him, and it is from that reputation that the door of Masonry was darkened. What led up to the Morgan Affair necessitates us to answer the question:

Was William Morgan Murdered by Masons?

This question is an important one, as in the years following his death American Masonry plummeted nearly to extinction because of his mysterious disappearance.  To be a Mason, then, was to be a pariah in society and whose disappearance still ripples in present day conspiracy circles around the world.

In this episode of Masonic Central, we talk with Stephen Dafoe, the author of the new book Morgan: The Scandal That Shook Freemasonry

as we explore the Masonic cold case murder of William Morgan and explore the “who, what, and why” of this tragic (and momentous) event that became a fire brand to the fraternity and the rally cry to the Anti Masonic Party.

This is a special hour and a half long program aired on Masonic Central on Sunday June 14, 2009.

Also Read: The Lie Rob Morris Told on the aftermath and conspiracy of the William Morgan murder.

END_OF_DOCUMENT_TOKEN_TO_BE_REPLACED

Raised to a Master Mason in 1908, at Harmony Lodge No. 17 in Washington, DC, Carl H. Claudy  served as the Master and eventually as Grand Master of Masons … END_OF_DOCUMENT_TOKEN_TO_BE_REPLACED

In this final installment of the Faith Hope and Charity series, we consider the symbolism of charity, or perhaps better called love. It is this attribute that … END_OF_DOCUMENT_TOKEN_TO_BE_REPLACED

In this installment of the Symbols and Symbolism of Freemasonry, we examine the text of Albert Mackey's Encyclopedia of Freemasonry on the symbolism of … END_OF_DOCUMENT_TOKEN_TO_BE_REPLACED

In this installment of the Symbols and Symbolism of Freemasonry, we consider a reading of Albert Mackey's text on the subject of Faith as it pertains to … END_OF_DOCUMENT_TOKEN_TO_BE_REPLACED