You are here: Home / Archives for Mt. Pisgah Lodge

On this Pearl Harbor Sunday join us in some in depth understanding of the meaning of Freemasonry as Masonic Central interviews RW Michael T. Anderson, Deputy Grand Master of The Most Worshipful Prince Hall Grand Lodge of Texas.

We will discuss the special meaning of Masonry to him and what he believes it should be to others. Also we will explore how Prince Hall and Pride of Mt. Pisgah Lodge teaches their candidates going through the degrees and how important comprehension and understanding is of them. Br Anderson is also known for a keen understanding of the nuances of Freemasonry and will share with us some of his wisdom.

Br. Michael attended Southern Arkansas University, Magnolia, Arkansas for 2 years where he became a member of Omega Psi Phi Fraternity. He is presently employed with AT&T, (formerly SBC), in Dallas, Texas, where he has worked for 28 years. Michael is a member of Mt Pisgah Baptist Church, where he serves in the male chorus and current president of the Board of Directors. He also serves as the 2nd vice president of the Irving/Carrollton Branch of the NAACP. Married for 27 years, to the former Gloria Hicks, of El Dorado, Arkansas, they have 2 daughters, April and Amber and 2 grandkids, Kaliyah and Kiontre.

In 1988 Michael became a Mason in King David Lodge #151 in Dallas, Texas, under the guidance of Lawrence “Pap” Anderson. From that time on he has become a member of Mystic Tie Chapter #3, Holy Royal Arch Mason, Trinity Commandery #3, Knight Templars, Dale Consistory #31, A.A.S.R., ZaKat Temple #164, A.E.A.O.N.M.S.. He is also a member of Margaret O. Sample, OES, and M. L. Ray Court, Heroines of Jericho.

In 1994 Michael formed Mt. Pisgah Lodge, Dallas, obtaining the charter in 1995 and becoming its first Master. The Lodge consolidated with two other Dallas Lodges, Pride of Dallas and Metropolitan Lodges, in 1998 & 1999 and changed its name to Pride of Mt. Pisgah and its number to 135.

Presently Brother Anderson is Deputy Grand Master of The Most Worshipful Prince Hall Grand Lodge of Texas and will be its next Grand Master when and if elected. He presides in the East some of the time at the Winter and Summer Grand Lodge Sessions. He has traveled outside Texas representing the Grand Lodge and Grand Master, most recently at the Grand Master’s Conference where he represented Texas while the Grand Master was installed as Vice President. He is a sought after speaker, last year delivering a special oration for the 10th anniversary of his OES Chapter and this coming year he will be addressing the Master’s Banquet at Pride of Killeen #620. 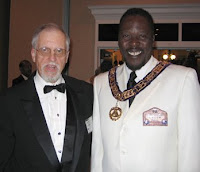 Our own Br. Fred Milliken with R.W. Anderson.

Listen live to our program by going to MasonicCentral.com or be a part of our live in “virtual” studio audience by logging in at talkshoe at 6PM PST / 9PM EST! Also, you can download the show from our website MasonicCentral.com.

END_OF_DOCUMENT_TOKEN_TO_BE_REPLACED

Raised to a Master Mason in 1908, at Harmony Lodge No. 17 in Washington, DC, Carl H. Claudy  served as the Master and eventually as Grand Master of Masons … END_OF_DOCUMENT_TOKEN_TO_BE_REPLACED

In this final installment of the Faith Hope and Charity series, we consider the symbolism of charity, or perhaps better called love. It is this attribute that … END_OF_DOCUMENT_TOKEN_TO_BE_REPLACED

In this installment of the Symbols and Symbolism of Freemasonry, we examine the text of Albert Mackey's Encyclopedia of Freemasonry on the symbolism of … END_OF_DOCUMENT_TOKEN_TO_BE_REPLACED

In this installment of the Symbols and Symbolism of Freemasonry, we consider a reading of Albert Mackey's text on the subject of Faith as it pertains to … END_OF_DOCUMENT_TOKEN_TO_BE_REPLACED