You are here: Home / Archives for Paul Bessel 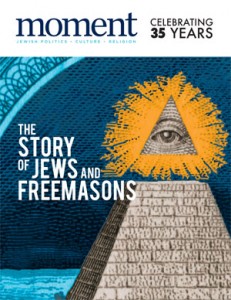 Br. Paul Bessel, from the web site fame of the same name http://www.bessel.org/ was interviewed recently by the American Jewish Community magazine Moment.

In the issue, Paul spends come considerable time talking about Masonry, his Masonic journey, and Freemasonry’s place int he fabric of America.

It really is an interesting article that I highly recommend.

for those who may not remember, Br. Paul was a guest of Masonic Central very early on in 2008 where we spoke with both Paul and Jerry Samet about the their time in Masonic leadership, their work on bridging diversity in the craft, and Masonry in general.  You can find the show here.

In this episode of Masonic Central, we are joined by Paul Bessel and Jerry Samet who are both prominent Masons in their own right, with Br. Paul having served in 7 Grand lodge offices under the Grand Lodge of Washington DC and Br. Jerry as the Past Grand Master of Washington DC. If those titles were not emphasis enough, Br. Paul is a prolific author and collector of Masonic information, which he publishes on his Masonic website www.bessel.org as well as in print in his 2005 book Masonic Questions and Answers.

The original program was recorded August 31, 2008 at 6 PM PST on the Masonic Central podcast.

Jerry Samet passed away in December, 2020.

END_OF_DOCUMENT_TOKEN_TO_BE_REPLACED

Raised to a Master Mason in 1908, at Harmony Lodge No. 17 in Washington, DC, Carl H. Claudy  served as the Master and eventually as Grand Master of Masons … END_OF_DOCUMENT_TOKEN_TO_BE_REPLACED

In this final installment of the Faith Hope and Charity series, we consider the symbolism of charity, or perhaps better called love. It is this attribute that … END_OF_DOCUMENT_TOKEN_TO_BE_REPLACED

In this installment of the Symbols and Symbolism of Freemasonry, we examine the text of Albert Mackey's Encyclopedia of Freemasonry on the symbolism of … END_OF_DOCUMENT_TOKEN_TO_BE_REPLACED

In this installment of the Symbols and Symbolism of Freemasonry, we consider a reading of Albert Mackey's text on the subject of Faith as it pertains to … END_OF_DOCUMENT_TOKEN_TO_BE_REPLACED