You are here: Home / Archives for recession 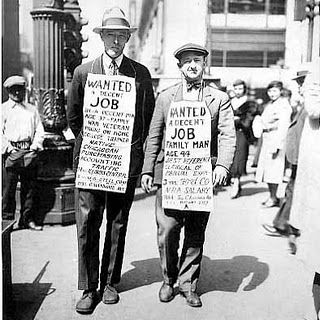 This was originally published in January of 2009 on the Masonic Traveler blog.

Freemasonry moves through periods of ups and downs. Like the stock market, there are periods of increases and periods of decreases. Peaks and valleys, plateaus, and depressions, which is normal for any system, especially as nothing remains static, motion is a constant.

Even as Masonry exists in the dimming embers of the post World War II correction period of post war fraternal enthusiasm, I started to ponder another phenomenon that ‘may’ be looming on the horizon, and something completely outside of the corporate body of fraternal control.

It’s no surprise that we are in the midst of an economic downturn. Not quite a depression, at least not to every talking head on the television, but the word has been thrown around, and even our most recent unemployment numbers are inching close to that era of saving your money in your mattress and leaping businessmen from corporate towers.  Given the re-visitation to the matter today I’d now consider the state of things as an economic depression for many given the wavering unemployment figures anywhere from 9 to 25%.

In ’09, as today, I stopped to reconsider what this state of things means, from a personal level and from a broader perspective of what it may mean to the fraternity.  What I consulted were the numbers from the MSANA, to see what some of the trends were in the last near 100 years. In particular, I was curious to see was what the effects of the Great Depression were in relationship to 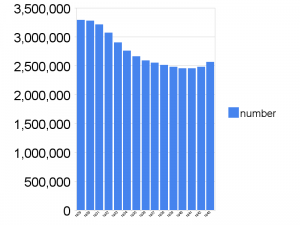 How that number came about is difficult to assume.  What is obvious is that 1929 and 1930 were relatively stable years.  but 1931 onward began a domino effect decrease that lasted for a decade.  There could be any number of variables in that equation, large attrition from earlier member bubbles (say 50 years earlier +/-), a loss due to changes in society with the post World War I boom, or you could extrapolate that it was the economic hardship with the Great Depression that caused the loss.

Important to add, in no period, prior to or after, was there a similar decrease in numbers, until you reach the 1959 water mark, and then the whole of American Freemasonry enters the spiral of decrease where it remains today.  But between 1929 and 1939, with ten years of economic disaster, increasingly fewer jobs, much lower income, and escalating costs – each of these factors in the Depression had to 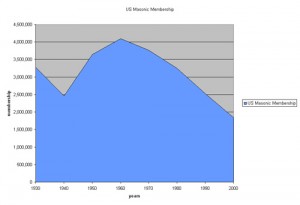 have some net effect. As mentioned it wasn’t until 1941 that numbers started to tick back up, slowly which you can see it in the graph of American Masonry from the MSANA numbers (1925-2007). There is a definite drop off that takes place that turns around as, conceivably, the economy turns around.

I found an interesting commentary about this period from the Texas State Historic Society as it related to Texas Freemasonry.

As after most wars, Masonic membership showed a dramatic increase after World War I; in Texas it climbed from 94,000 in 1920 to more than 134,000 in 1929. The Great Depression brought an equally dramatic decline, to a low of 95,000 in 1937. A number of local lodges lost their temples, constructed during the prosperous 1920s, and their membership declined by as much as 60 percent. The waning of the depression and the onset of World War II produced the reinstatement of many former members, and after 1945 thousands of new members joined the lodge. Postwar membership reached 245,000 in 1961

The silver lining in this story is that at some point there was a turn around, that the numbers lost were regained, but nearly 25 years later. In fact, in that same article, it says that the loss was only after a significant increase in membership following the end of W. W. II, and the period of gain-loss-gain netted an almost even amount of members. The only real obstacle was the time in which it happened.

But, the numbers in reflection seem to be missing certain aspects of what the numbers reflect today. That difference was in the eras in which the economic crisis took place. In 1929, national membership was at a healthy 3.25 million members. When you start to factor in a 24% loss from the drop in the economy (a Depression), on top of an already steady loss of 20% per decade for the last 4 decades, it means that Freemasonry stands to potentially lose 44% in the next ten years, and which translates into a loss of 652, 717 members. (44% of 1,483,449 members as of 2007).

This would leave North American Masonry with roughly 830,732 members by 2019. Not devastating, but dramatic, but potentially more dramatic if there is a larger drop due to greater attrition (deaths/demits), and if you consider a possible snowball effect: fewer members leading to fewer meetings which leads to fewer lodges which repeats the cycle fewer members and so on…  The numbers of loss could continue and grow. And, if the trend since 1959 holds up that there will still be a decrease of roughly 20%, meaning the memberships will continue in a downward trend.

What this all means is open to lots of speculation. The change will start becoming more and more evident as more and more lodges close shop as interest in a particular community wanes or is not nurtured. It seems an inevitable reality to the situation at hand, especially when we start to adjust the lens of its perspective as we read the great debate that just recently took place between the Masonic Line‘s Palmetto Bug and the Beehives Fred Milliken. Does a lodge have dominion over its own building, or is the lodge an instrument of the broader Grand Lodge? The discussion has been relevant in recent judicial decisions regarding break away churches and their mother church, with lower courts ruing with the congregations and upper courts with the denominational organization.

Even the debate over this being a corrective period of membership negates the value of those rank swelling members whose past efforts and dues made it possible for the very lodges we reside in today.  Running lean is less a product of managerial ingenuity and more a byproduct of lost marketplace interest.  Running lean can work in manufacturing, but in member  associations?

Will the numbers (and fraternity) trend the way they did in the 1930’s? Does it necessitate the management our own lodges or to give them over to the parent corporation to manage? What will this economic challenge look like by way of the fraternity?  What if it applied a Six Sigma methodology to membership to create a product that meets and exceeds expectations.  This is a business measure, but the mystic tie needs to be quantitative in some fashion, right?

END_OF_DOCUMENT_TOKEN_TO_BE_REPLACED

Raised to a Master Mason in 1908, at Harmony Lodge No. 17 in Washington, DC, Carl H. Claudy  served as the Master and eventually as Grand Master of Masons … END_OF_DOCUMENT_TOKEN_TO_BE_REPLACED

In this final installment of the Faith Hope and Charity series, we consider the symbolism of charity, or perhaps better called love. It is this attribute that … END_OF_DOCUMENT_TOKEN_TO_BE_REPLACED

In this installment of the Symbols and Symbolism of Freemasonry, we examine the text of Albert Mackey's Encyclopedia of Freemasonry on the symbolism of … END_OF_DOCUMENT_TOKEN_TO_BE_REPLACED

In this installment of the Symbols and Symbolism of Freemasonry, we consider a reading of Albert Mackey's text on the subject of Faith as it pertains to … END_OF_DOCUMENT_TOKEN_TO_BE_REPLACED