You are here: Home / Archives for records

I’ve spent a lot of time in the last five years researching both Masonry and the American Civil War, as well as the intersection of those two subjects, and that is why my blog posts have been less frequent of late. Currently, I am in the middle of the final edit for my book on that subject which will be published in early 2010 by the University of Alabama Press and it’s time-consuming work. I had been thinking about Civil War Masonry since I was raised, but it wasn’t until I began looking for Civil War ancestors here at home that the work really started to take shape. In fact, it was over dinner one night some years back that my wife shared an interesting tidbit that got the whole thing rolling. Her great great grandfather, she announced, died in 1863 in “Chimichanga, Georgia,” which made me pause with my fork in mid-air.

“That could have been it,” she said blandly, eating her peas. 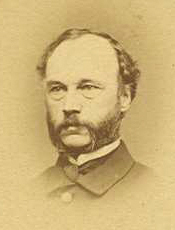 My wife has no interest what-so-ever in history, but historically minded folks will recognize the homophone as a reference to the Battle of Chickamauga that occurred in north Georgia on September 19-20, 1863. To suggest to a Civil War geek like me, that someone died within 20 miles of that place in 1863 is the same as saying – yeah, my grandfather worked in a schoolbook warehouse in Dallas in 1963.  So I told her that there were a lot of people who died in Chickamauga, Georgia in 1863 and most of them died from lead poisoning.

I hurriedly finished my peas, and got out the family papers. Sure enough, we found the reference to Chickamauga, and that led to a record’s request to the National Archives and Records Administration (NARA), and some correspondence with the Indiana Historical Society, among others. I think my frau would have been content to just let her great great grandfather rest in peace with his burrito, but by that point I was committed.

Men and women seem to go about genealogy differently. From what I can tell there are two main areas of interest for chick-genealogy. The first going something like this; “What diseases did my grandmothers die of and do I carry the gene for female baldness?” Every genealogy I’ve ever looked at that was compiled by a female described the diseases, maladies, and medical complaints of the ancestor more thoroughly than a coroner’s report. And hers was no exception; that thing was filled with more tumors, lesions, goiters and leprosy than a field dressing station along the Burma Railway in 1942– it’s enough to make you retch.The only thing missing was a tissue sample.

The other interest females invariably have is kind of a scrapbook thingy where they can read old newspaper clippings about what kind of dress the bride wore and paste it all pretty-like in a photo album. So when you’re poring over these things, you’ll come across pressed flowers and scraps of material and old social notices from the Mudburgh, Iowa News Advertiser about the soiree over at Lorraine Hudson née Klingenhoffer’s where the band played until the wee hours of the morning.

This is, of course, vastly different from what guys are interested in – namely, “Did my great-grandfather save the Union by shooting Braxton Bragg in the left nut?” And of course that inquiry carries with it some risk, because although you are unlikely to discover that your Grandfather was awarded three Medals of Honor (you’d already know that), you could find some cool stuff like maybe he was in Pickett’s Charge or something, but you might also just find the eerie line in the official record “Shot for Cowardice” written by some clerk in a spidery hand at regimental headquarters, or “Stole a pig: deserted.”

Probably the best possible outcome is to find out that he was wounded in battle somewhere – accidental shootings don’t count and just leave the impression that the whole family is a collection of idiots. Killed in action is morbidly acceptable, because at least that means he was in the thick of things and aiming at Braxton Bragg’s family jewels, before a crafty sharpshooter cut short the life of a hero. If they survived the war and didn’t come away with a cool eye patch or a wooden leg or something, it’s still OK, but it’s better if they wrote a lot of letters and described desperate bayonet fights among the harried rear guard, or catching a spy or something. Outlawry is acceptable too, but only during wartime and only against the enemy.

You can also check and see if they were Masons. The Grand Lodges maintain detailed records of membership, and they are always a great place to start. You’ll need their full name and the approximate year of birth to determine when they would have been eligible to join. Back then, barring something odd, a man had to be twenty-one to be initiated. Dates of death are also very useful and many families noted those down, so even if you don’t know where the grave-site is, you can often determine the year, if not the exact date of death.

Obituaries, which often survive among the scraps of material and pressed flowers are a big help in this, and also in determining Masonic affiliation because they will generally note if Masonic funeral rites were performed. The better ones will list the lodge name and number. Even if you confirm your ancestor’s Masonic pedigree, you might not find a lot from Grand Lodge unless the Mason was active in lodge. But in genealogy, something is always better than nothing.

If this spurs you on to finding the paladin, or the pig-stealing deserter, in your own family, a few things might help.

For starters, I’d look for letters or death certificates that place them in a particular location on a concrete date. If you can determine that the guy was in, for example, Georgia in 1863 and if he was military age, you’ve got a damn good chance of having either a potential Hero of the Union (or Confederacy, as they case may be) or the bane of swineherds everywhere. Birth and death records are hard to find if the family copies are lost, but they are the baseline – if you find them, you have your ancestor right where you want him — pinned down to time and place and then you can expand your search to government, Masonic and church records. When you finally nail down that the guy was a soldier, NARA will search their enormous collection and find the enlistment records for you for free. You’ll even get a physical description, wooden leg and all.

If you find his apron – let me know.