You are here: Home / Archives for Sacrifyx 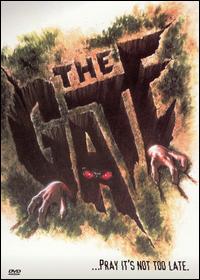 The Gate – There’s a Passageway – A Gate Behind Which the Demons Wait to Take Back What Was Once Theirs.

Stepping past the Crowley references and guys wearing funny robes and hats, at some point the idea of Freemasonry and Satanism came together so as to ignite the idea that the fraternity is sinisterly evil. And, after spending some time with the campy horror film The Gate, I was struck by the prominently place iconography of the fraternity at the heart of the evil malfeasance in the film.

In a brand sense, the film made no bones about equating Freemasonry ( in the image of the square and compass) with summoning demons bent on bringing back the “old Gods” especially in a film devoid of any other significant branding.

Its a pretty obscure film these days, out of our contemporary memory, but at the outer edges of this present generations adolescence. What I found most interesting was that prominence that it was given in a film that really only promoted the band Killer Dwarfs. the only other major “Brand” in the film I caught was the square and compass.

You can get the first hint of it in this clip at 01:15 (its much more discernible on the big screen).

In the scene is a voice over that says: “…there is a passage way in between all physical worlds the world of light and pleasure and the spiritual world of madness and pain, a gate behind which the demons await for the chance to take back what is theirs.”

It picks up again when “the Dark Book-the bible for demons” teaches listeners how to summon the old God demons. Its backward masking at its finest, but a reinforcement of the idea of brand association between Freemasonry and Satanism.

Its featured pretty prominently in a few of the scenes of this campy 80s horror film, but even as cheesy films go, this one had a pretty decent box office for the day, #2 rank, 1,139 theaters (the 18th highest PG-13 film of 1987) grossing $13,500,000 for its domestic release, all of which means that a good number of people saw the film and of those watching it many (some?) had to of noticed the imagery. Noticed in the same way that Coke o’ Cola would keep their can out of the hands of a cinematic serial killer as he did his dirty work.  Placement matters.

Why this is so important is that in the 1980’s Satanic Ritual Abuse was considered an epidemic. From ReligiousTolerance.org:

Many in the social worker, therapist, conservative Christian and police communities experienced a “Satanic Panic,” starting about 1980. They, and much of the rest of the public, believed that a widespread, underground, secret network of Satanic cults were kidnapping, sexually and physically abusing infants and children, murdering them, and sometimes even eating them. In the United States and Canada, the scare reached a peak in the early 1990’s. It spread from the U.S. to other English speaking countries, particularly Canada, Britain, and Australia. The panic gradually declined because of the lack of hard evidence.

Religious Tolerance talks about the industry that spawned out of the SRA experience to promote the “Satanic Panic”.

What’s the point of all of this? Not that Masonry wasn’t already falling out of contemporary thought at the time The Gate came out (1987) but that films like this helped perpetuate an image problem plaguing the fraternity and likely helped plant it into the collective memory that many ardent anti-masons (and lay observers) have today. It may not be possible to trace the bad PR directly back to this film, but content that this film helped shape opinions in waves for generations to come of age.

Don’t just take my words for it, in the article “Do movies shape your opinions?” from Purdue University English professor William J. Palmer, in the March 1995 Society for the Advancement of Education/USA Today, he says:

“People in mass society get their sense of history from the way it’s portrayed in movies.”

And, from David Sterritt, film critic from the Christian Science Monitor from the September of 2001 article “Do violent films shape or reflect?”

“..troubling is the thought that public views of retaliation, revenge, and warfare may come more from decades of popular entertainment than from sustained reflections on history and morality.”

His comments were in reflection to the post 9/11 sentiment of revenge and violence, but builds on the idea of perpetuating ideas in films that seep into our collective unconscious.

So, could the film The Gate built upon the growing Satanic Panic of the 80’s and of been responsible for the misaligned idea that the fraternity is a satanic cult bent on summoning demons to take over the world? According to the 1987 Lionsgate film it is.

One last point I wanted make was the power of product placement (or misplacement) and the importance of keeping your brand in the right context.

Cracked Magazine has a great article about product placement in films The 10 Most Shameless Product Placements in Movie History which strikes at the heart of the matter. Its obvious that product placement works at some level, the hero drinking a soft drink, the robot car being an American iconic muscle car (which happened to just be redesigned) or the cut and adorable space alien’s love for chocolate peanut butter candies.

So what does that mean to Freemasonry when films like The Gate or much later From Hell and the Da Vinci Code build on this same idea, not with demons and satanism but with equally as disturbing messages of some nefarious activity. BrandChannel’s article Brandcameo’s 2004 Award [now archived] spells it out speaking to the power of branding in films:

“…One wine brand, Blackstone Pinot Noir, has seen sales increase by almost 150 percent since the film (Sideways) opened. Additionally, [the film]has increased tourism to California’s wine region and driven business up 30 percent at The Hitching Post, a restaurant featured in the film.”

This is a perfect example to measure the ROI of effective placement.

From a lay member perspective, there isn’t much to do other than to speak up when someone tries to draw the connection between Freemasonry and Satanism. Speaking up is probably the best thing for us to do. From an institutional perspective, some form of advocacy to the movie industry would be a good thing, but unlikely without any national organization (maybe the MSANA, but their is little funding to wage that kind of outreach). Until the fraternity manages to re-organize itself, it will continually be portrayed in ways that will inadvertently shape its future one movie-goer at a time, one film at a time.

END_OF_DOCUMENT_TOKEN_TO_BE_REPLACED

In this final installment of the Faith Hope and Charity series, we consider the symbolism of charity, or perhaps better called love. It is this attribute that … END_OF_DOCUMENT_TOKEN_TO_BE_REPLACED

In this installment of the Symbols and Symbolism of Freemasonry, we examine the text of Albert Mackey's Encyclopedia of Freemasonry on the symbolism of … END_OF_DOCUMENT_TOKEN_TO_BE_REPLACED

In this installment of the Symbols and Symbolism of Freemasonry, we consider a reading of Albert Mackey's text on the subject of Faith as it pertains to … END_OF_DOCUMENT_TOKEN_TO_BE_REPLACED

In this edition of Freemason Information’s Symbols and Symbolism we consider, together, the four cardinal virtues of Freemasonry as gathered form Albert … END_OF_DOCUMENT_TOKEN_TO_BE_REPLACED