You are here: Home / Archives for Scarface

So Jay-Z isn’t a Freemason… but his line of Rocawear is. 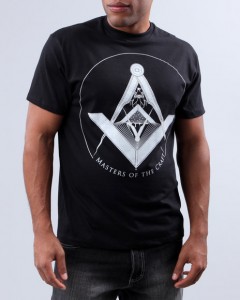 Not so new, but just in time for fathers day, is the Masters of the Craft T-shirt straight up with the Square and Compass. Called the Circle T, its one a few in the Rocawear line (both new and old) that’s riffing off the whole esoteric/occult/Masonic mystique.

It must mean were finally cool, right? A Hip hop mogul borrowing the iconography from the 300 year old fraternity for his own personal line of cloths.

It’s not a new thing. I remember being at a fashion trade show some years back seeing Shriners iconography being used as repeat screen printed patterns on urban apparel in much the same way.  The trend at the time turned into skulls (which is why there were so many in Penny’s, Sears, Wall Mart and Target a year or so back). 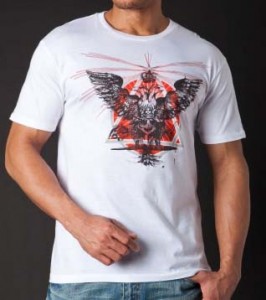 But Jay-Z’s Rocawear is riffing off the Scottish Rite too, Northern Jurisdiction to be precise. It makes me wonder if his designers who lifted the imagery have any idea that their linking the rappers line to a fraternity who at one point had confederate general Albert Pike as its organizer, not that theres anything wrong with the reformed confederate general or anything, but theres an irony there when successful urban hip hop apparel connects itself to Civil War anti-history.

The Double Phoenix Tee has as its description: Short sleeve tee features a ribbed crew neckline, a printed eagle graphic design at front, and a printed logo design at left sleeve. It might just as easily to of said the Scottish Rite Double Eagle Tee… In case your wondering, here’s a link to who they lifted the graphic from.

So then, one can only assume, if J isn’t a Freemason, then he must like to dress like one, and imitation is still the best form of flattery.

Or maybe his line of apparel is just trying to fuel the extra publicity that he is some illuminiati/Freemason agent, and that he is really playing behind the scenes – given as many denials Jay-Z has made to being a Mason. 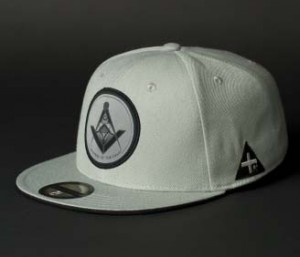 Also in the Rocawear line is a cap that sports the square and compass too in the accessories section. Imagine running into somone with that cap askance on their head representing , err, I mean Jay-Z.

This is a great post on the use of Empire, Heraldry, Skulls and Esoteric Imagery In Modern Rap Culture from 2010, which you can see is not something new. But I think there is a definite connection trying to be drawn to the perceived life of the secret society as an aspirational message of the Brand, much the same way that earlier urban music linked itself to the iconic Al Pacino film Scarface.  I’ve even noticed in a few local fairs that side by side on the midway game prize wall sits framed pictures of the pyramid and the eye from the dollar bill right next to the black and white poster of Tony Montana and the machine gun, ready to adorn the walls of overly macho adolescents and their aspirational “gangsta” lifestyle.

So then, is Rocawear trying to do the same thing, subtly, by making such direct use of the fraternal imagery?  Are they trying to re-link Jay-Z to Freemasonry even after J denied it?

[since the original post, the apparel is no longer in the Rocawear line-up]

END_OF_DOCUMENT_TOKEN_TO_BE_REPLACED

In this final installment of the Faith Hope and Charity series, we consider the symbolism of charity, or perhaps better called love. It is this attribute that … END_OF_DOCUMENT_TOKEN_TO_BE_REPLACED

In this installment of the Symbols and Symbolism of Freemasonry, we examine the text of Albert Mackey's Encyclopedia of Freemasonry on the symbolism of … END_OF_DOCUMENT_TOKEN_TO_BE_REPLACED

In this installment of the Symbols and Symbolism of Freemasonry, we consider a reading of Albert Mackey's text on the subject of Faith as it pertains to … END_OF_DOCUMENT_TOKEN_TO_BE_REPLACED

In this edition of Freemason Information’s Symbols and Symbolism we consider, together, the four cardinal virtues of Freemasonry as gathered form Albert … END_OF_DOCUMENT_TOKEN_TO_BE_REPLACED