You are here: Home / Archives for Shrine International

The Grand Master of Arkansas, Jesse D. Sexton, issued an edict on Tuesday, July 16, 2019 that recognizes Shriners International as a “Civic Organization”.  The result of this decision permits Arkansas Masons, for the first time in more than five years, to be members of Shriners International.

Arkansas Masons are now permitted to immediately begin petitioning for membership in the Shrine following the decision of the Grand Master of Arkansas.  In response to significant positive steps taken by the Grand Lodge of Arkansas at its 2019 February Communication, Shriners International passed a resolution during its 2019 Imperial Session. As result of this resolution and resulting action taken by the Grand Lodge, as of July 16, 2019, all new initiates for Shrine membership in Arkansas must be Master Masons in good standing. The resolution has no current impact on Arkansas Shriners who are not currently Masons.

As a Past Grand Master and as a long-time Shrine Membership leader, Imperial Sir Jeff Sowder is extraordinarily well equipped to lead the Shrine through this period of productive transition.  Both organizations are strengthened by the continuing collaborative efforts that have established a pathway for mutual success.

The seemingly prejudicial Grand Lodge of Arkansas is at it again.

Once again a Grand Lodge, this time the Grand Lodge of Arkansas, has taken steps to make Freemasonry exclusive rather than inclusive; parochial instead of universal.

In past moves around the Masonic spectrum we have seen African Americans blocked, Pagans and non Christians ejected, those employed in the liquor industry removed, women obviously barred, Democrats and Liberals prohibited access, Catholics and Jews prohibited.  Now it seems members of Shrine International are out.  Pretty soon, if you stand there and let them get away with this nonsense, you will be out.

Notice once again that if you violate the Grand Lodge you must SELF EXPEL yourself.

If you choose not to then they will expel you WITHOUT A MASONIC TRIAL . That’s the same choice they offered Derek Gordon.

Do northern Grand Lodges not see the light after Florida?  And now this?  What will it take to create some kind of mutuality of purpose and means?

These rouge Grand Lodges are practicing a kind of bogus Freemasonry AND MAINSTREAM MASONRY NEEDS TO PULL RECOGNITION FROM THEM!

The letter from the Arkansas reads:

After carefully considering the facts, I have made the determination that the Imperial Shrine has essentially engaged in the creation of clandestine masons.  The reasoning is that the Imperial Shrine requires as a prerequisite to membership that the person be a Master Mason.  When this Grand Lodge, and others, has taken action to expel a man from the Fraternity, the Imperial Shrine has made provision to keep him as a member.  Essentially, they create the expelled person a Master Mason.  This very action is in conflict with the Ancient Landmarks, and the Laws of the Grand Lodge of Arkansas.  As a mason creating organization, the Imperial Shrine is not a setting member, or recognized by the Conference of Grand masters of North America, and is therefore itself clandestine.

Given our long-established prohibition against clandestinely made masons, it is my decision, and I so order that no member of the Grand Lodge of Arkansas may fraternally associate or communicate with, or be a member of any club, temple, center, or subordinate body of the Imperial Shrine.  Further, according to past affirmed decisions of the Grand Lodge, to do so constitutes the penalty of immediate expulsion from our Fraternity.  I remind you that each Master Mason is charged by his Obligation to safeguard the Fraternity. 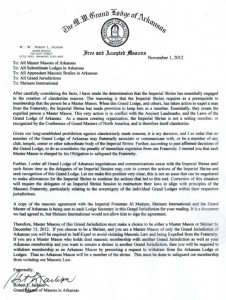 Therefore, Master Masons of this Grand Jurisdiction must make a choice to either be a Master Mason or Shriner by December 15, 2012.  If you choose to be a Shriner, and you are a Master mason of only the Grand Jurisdiction of Arkansas you will be required to Self-Expel to avoid violating Masonic Law and being Expelled from the Fraternity. If you are a Master Mason who holds dual masonic Membership with another Grand jurisdiction as well as your Arkansas membership and you want to remain a shriner in another jurisdiction, then you will be required to withdraw membership from the Arkansas lodge or Lodges.  Thus no Arkansas Mason will be a member of the shrine.  This must be done to safeguard our membership from violating our Masonic Law.

The Shrine International made their case in a video published on December 11th, 2012, on the matter, which is no longer on the web.

You can find the full report of the Shrines reaction in a report published on the Shriners Hospital website. 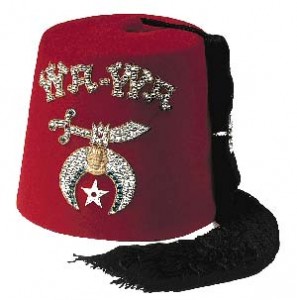 The song bring out the clowns starts to ring in my head when ever I start to think about the Shrine in a large way.  Not out of any misanthropy but because of their excellent work and commitment to the happiness and well being of so many children.

To say the name of the Shrine International and instantly the image of charity, children’s hospitals, and Red Fez’s comes to mind, but behind those iconic images is an organizational powerhouse that, some suggest, drives the future of the Masonic fraternity.

Joining Masonic Central this week is Imperial Sir Jeff Sowder who is Imperial Outer Guard for Shriners International to talk about all things big and small as it relates to the Shrine.  Of particular interest:

So many questions have swirled about the connections of the Shrine and the blue lodge that its time to put them to task and ask them of the Shrine themselves, and Imperial Sir Jeff Sowder has graciously stepped up to explore these topics and more about the “world’s greatest philanthropy.”

You can join the live Masonic Central program on Blog Talk Radio Sunday May 2nd, at 6pm PST/9pm EST and join our live interactive chat room to send us your questions and talk about the program, or you can call in with your live questions to 347-677-0936 during the show.

It promises to be an interesting and entertaining evening to say the least and a great way to discover more about this charitable powerhouse of the Masonic family. on Blog Talk Rad

For more information on the Shrine, visit: Shrine International

END_OF_DOCUMENT_TOKEN_TO_BE_REPLACED

Raised to a Master Mason in 1908, at Harmony Lodge No. 17 in Washington, DC, Carl H. Claudy  served as the Master and eventually as Grand Master of Masons … END_OF_DOCUMENT_TOKEN_TO_BE_REPLACED

In this final installment of the Faith Hope and Charity series, we consider the symbolism of charity, or perhaps better called love. It is this attribute that … END_OF_DOCUMENT_TOKEN_TO_BE_REPLACED

In this installment of the Symbols and Symbolism of Freemasonry, we examine the text of Albert Mackey's Encyclopedia of Freemasonry on the symbolism of … END_OF_DOCUMENT_TOKEN_TO_BE_REPLACED

In this installment of the Symbols and Symbolism of Freemasonry, we consider a reading of Albert Mackey's text on the subject of Faith as it pertains to … END_OF_DOCUMENT_TOKEN_TO_BE_REPLACED