You are here: Home / Archives for social good 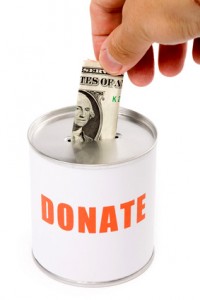 Someone said to me once that true altruism is a myth.

Defined as the “principle or practice of unselfish concern for or devotion to the welfare of others”, true altruism implies a giving without the need for getting anything in return. But, in any system of morality when you dissect the notion of giving, even the most devout or un-materialistic comes with a cost. Even the devout Buddhist, in their relentless pursuit of Nirvana, can find that in the desire to give away everything to achieve that state of emptiness is giving it away with a purpose, nullifying the aspect of it being altruistic.

But this look at the cost of charity isn’t about altruism; rather it’s about a change taking place in the public sphere on trading a benefit for a benefit in the name of charity.

Once seen as an act of love, charity has evolved from the notion of a fraternal or brotherly love to an act of alms giving, and now a value proposition of scratch my back and I’ll scratch yours.

Perhaps it’s a more honest way to give, knowing in advance what you get back.

What I’ve started to notice is an increase of corporate giving based entirely on what you can do for the corporation. For example, since the advent of Facebook and the ever increasing importance of the Like button, more and more organizations are making use of the Like button to give a little for every click they receive.

Stories of this benefit for benefit abound.

And these are just a few examples. All it takes is a Google search of “Like us on Facebook to donate “ to come up with lots of pages to be Liked triggering a donation.  Doing this every week might be a fun altruistic activity to do every month.

What I wonder is in this rush to give money, is the charity really about giving to those in need or is it about accumulating Likes?

The more of these you see, the answer starts to become obvious. But is that such a bad thing? While most of these charitable agencies would still accept a check, pick up your used car, or even be appreciative for your sweat equity, the ‘buck a Like’ proposition seems to be a foundational retraining of our public sensibilities shaping the how and why to give.

Should we give because we want to help someone or because someone else will give money if we ‘Like’ them and potentially win a prize for the click.

I found this same kind of trend making its way into the grocery store too.

In the midst of a festive holiday meal, I glanced down at a bottle of Hunts Ketchup and noticed a tiny pop out graphic on the ConAgra product label that offered to End Child Hunger by donating a meal to a Hungry Child ($ 0.13 – thirteen cents) for every code entered off of one of their products. Their fine print reads:

Donation per code entered = $0.13, the cost to provide one meal through Feeding America’s network of local food banks. Codes will be accepted up to a maximum of 3 million meal donations or until 8/31/2012. Valid in U.S. only. Limit five codes entered per computer per day.

On their webpage for their End Child Hunger campaign, there is no mention of whether or not they would give the thirteen cents regardless of your entering in the code (though they do say that they have given more than $36 million and 275 million pounds of food to Feeding America).  Would some hungry kid not eat if I didn’t put in that code? I feel socially guilty for not following the instructions of someone with the potential of helping but only by my complicity.  Why not just give whether or not I enter a code.  Is my marketing data really that important to hold a kids 13 cent meal hostage for my name and email address?

But, before I get to down on corporations, they haven’t all been greedy and, in fact, they’ve given quite a bit. As of 2009, USA Today reports that corporations have given upwards of $3.9 billion in contributions to non-profits, from Wal-Mart to Fannie Mae (Con Agra is on that list, and if you sort it, have some fun finding where they rank on the bar graph).

This is corporate giving, with stock holders and bottom line profit margins, so I can understand how they might be a bit tighter purse strings.

But in personal giving, how much do you give? When ever I’m able I put a few dollars into the hands of those who ask and have a need, and I’ve been known to buy a hot dog for the guy outside of the convenience store when he asked for one. But how many of you would be willing to give more than 60 billion dollars?

You can point to a few people today who have been very generous with their wealth, but generally speaking it’s been in the $100’s of millions and to specific institutions. You can see a slide show of the 10 most-generous donors in America by The Chronicle of Philanthropy from CNBC. This is a change from what the industrialist Andrew Carnegie saw as the responsibility of the upper class.

Carnegie’s idea, written into his essay The Gospel of Wealth, was that charitable giving shouldn’t just give to the poor and maintain their impoverished state. Rather, he urged a movement towards creating new modes of giving to create opportunities for the beneficiaries of the gift so as to better themselves. His idea was that if given without some controls, the gift would not simply be consumed in quick order and not be a source of greater and greater benefit throughout society.

No more hot dogs to the hungry guy.

In other words, you could say that Carnegie’s idea of giving was to teach a man to fish, rather than just giving him one.

In his time, Carnegie built 2509 libraries around the world, with more than 1,600 of them in the US alone. To be fair, not every library was maintained, and later Carnegie established the Carnegie Corporation to continue giving back 90% of his fortune (estimated in 2011 dollars as between 3 to 60 billion dollars) after his passing in managed grants.

Carnegie’s idea was that those best suited to support the greater good of society were the rich and the way for them to support it was achieved by the recirculation of their money back into it, an idea far different from the notion today of giving because you’ve been crowd sourced to ‘Like’ someone.

When did this idea of charity shift from a desire to benefit society with accumulated wealth to leveraging it for public social approval?

Maybe it’s a change in thinking of the greater good to making your enterprise shine like a jewel of “social responsibility”. This New Deal in charitable giving comes with the moniker of Crowdsourcing, which marketers consider to be “a perfect example of a direct method of engaging the consumer in corporate social responsibility.”

But this type of corporate giving comes with a cost, delivered on the backs of the giving corporation in little pats and ‘atta boys, something corporations are perfectly willing to talk about.

“‘Promote your promotions,’… So often a company is, in fact, engaging its employees, consumers and the community in giving back, but no one knows about it. And often that is the case with a company’s social responsibility footprint.”

To the company be true, meaning to the share holders and the bottom line of its income. The Sprint Center Foundation, by the way, engaged in their own 12 days of charitable giving in December of 2011 promising prizes for participation in a contest of ‘Likes’. Mind you, there was no cost to participate, and for your ‘Like’, the Sprint Center Foundation promised to donate $1 to local charities – while giving $318.00 away in prizes (no purchase necessary).

So what gets accomplished here in this complex milieu of being charitable today?

In the age of being electronically sociable, have we evolved a need to tell others what a good job their doing with being socially responsible and charitable and then jumping on board with a few clicks of the Like button? Maybe you can win a prize for the click, maybe not. What you can be sure of is that you raise the electronic footprint of every Facebook Page you like (and by consequence give them a means to bombard you with their posts and offers). Meanwhile, everyone gets to bask in the glow of giving and loving their brother.

This idea is really a seed change from the notion of charity and the wealthy helping to support the betterment of society putting it off on the very people who gave them their wealth in the first place. And then making the proposition even sweeter by layering the concept of giving with the idea of receiving gifts and prizes for it, a notion that has Crowdsource Marketers asking Can taking people’s money be fun?

No longer is the social responsibility on the rich.  Now its spread across the spectrum of society in general so as to fund the betterment of mankind in general, while the wealthy hold onto the bulk of their money asking us to give with a click, or a text message, or with a small contribution or by Liking us on Facebook.

It’s a far cry from Carnegie’s idea of giving to society for the greater good, today the greater good has a price and prize attached to it, and social responsibility refers to a Social media engagement point to talk about fishing rather than teaching a man how to fish.  But the cost of charity is less now a question of altruism, or even of social responsibility, instead it has become a value proposition of what do I get by giving it while those with the money to give less, crowdsourcing instead the contributions out to you.

Maybe instead of altruism being a myth, real charity for brotherly love is the myth.

END_OF_DOCUMENT_TOKEN_TO_BE_REPLACED

Raised to a Master Mason in 1908, at Harmony Lodge No. 17 in Washington, DC, Carl H. Claudy  served as the Master and eventually as Grand Master of Masons … END_OF_DOCUMENT_TOKEN_TO_BE_REPLACED

In this final installment of the Faith Hope and Charity series, we consider the symbolism of charity, or perhaps better called love. It is this attribute that … END_OF_DOCUMENT_TOKEN_TO_BE_REPLACED

In this installment of the Symbols and Symbolism of Freemasonry, we examine the text of Albert Mackey's Encyclopedia of Freemasonry on the symbolism of … END_OF_DOCUMENT_TOKEN_TO_BE_REPLACED

In this installment of the Symbols and Symbolism of Freemasonry, we consider a reading of Albert Mackey's text on the subject of Faith as it pertains to … END_OF_DOCUMENT_TOKEN_TO_BE_REPLACED