You are here: Home / Archives for Spanish Masonry 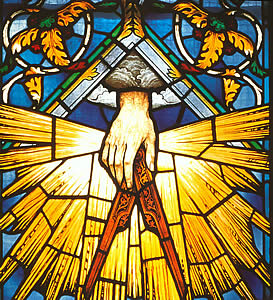 Such is the headline from the online Spanish newspaper El Confidencial.

“I will help you everything you need in your projects, as Masons do my obedience to you. You are the first president with whom we fully agree. And you can count on our order to carry out its future reforms.”

In a rough translation from El Confidencial Sarkozy reportedly wrote back:

“I trust you certify and support given to me, comfort me in my determination to continue the reform movement initiated to bring our country to new emergencies and give it a place in the evolution of the world.”

The issue in the GLNF resulted in GM Sifani refusing to call Grand Lodge into Session to debate the issue, his resignation as President of GLNF while keeping his Presidency of the organization or foundation.

Now the French Masons are in court to bring the issue to a head (shades of Frank Haas).

Meanwhile some GLNF members have contacted the Spanish GLE as to the likelihood of joining the Spanish Grand Lodge.

Spain has recently emerged from its own Masonic problems with current Grand Master Oscar Alfonso cleaning up the mess left by the previous Grand Master Jose Carretero.

I wonder what this all has to say about the Right of Exclusive Territorial Jurisdiction that some American scholars have written originated in Europe?

If you happen to be near the Iberian Peninsula, this sounds like an excellent event to attend.

From the Gibraltar Chronicle (from the Wayback Archive)…

Professor Juan Jose Morales Ruiz received a doctorate in Information Science from the Universitat Autónoma de Barcelona. He also has a Degree in journalism from the School of Journalism in Madrid. Professor Morales Ruiz currently works at the ‘Centro de Estudios Históricos’ of the Universidad de Zaragoza, where his research includes the history of Freemasonry in Spain. Professor Morales Ruiz is the author of a number of books and research papers on the subject of Spanish Freemasonry, with a particular emphasis on its role during the Spanish Civil War and its subsequent suppression under the regime of Francisco Franco.

Professor Ferrer Benimeli will talk on ‘La Historia de la Masonería Española’ and Professor Morales Ruiz will talk on ‘La represión de los masones durante la Guerra Civil (1936-1939), Franco y la Masonería’. The talks will be in Spanish. The general public is invited to attend. Admission is free. The talks promises to be of great interest to the general public as well as to Freemasons.

The talks are sponsored by the District Grand Lodge of Gibraltar, English Constitution.

About the Spanish Repression of Freemasonry – from Wikipedia:

It is claimed that the dictator Miguel Primo de Rivera ordered the abolition of Freemasonry in Spain. In September 1928, one of the two Grand Lodges in Spain was closed and approximately two-hundred masons, most notably the Grand Master of the Grand Orient, were imprisoned for allegedly plotting against the government. It is certainly true that Masonic lodges provided a convenient forum for those critical of the dictator, regardless of their political persuasion.

Following the military coup of 1936, many Freemasons trapped in areas under Nationalist control were arrested and summarily killed, along with members of left wing parties and trade unionists. It was reported that Masons were shot, tortured and murdered by organized death squads in every town in Spain. At this time one of the most rabid opponents of Freemasonry, Father Jean Tusquets, began to work for the Nationalists with the task of exposing masons. One of his close associates was Franco’s personal chaplain, and over the next two years, these two men assembled a huge index of 80,000 suspected masons, even though there were little more than 5,000 masons in Spain. The results were horrific. Among other countless crimes, the lodge building in Cordoba was burnt, the masonic temple in Santa Cruz, Tenerife, was confiscated and transformed into the headquarters of the Falange, and another was shelled by artillery. In Salamanca thirty members of one lodge were shot, including a priest. Similar atrocities occurred across the country: fifteen masons were shot in Logrono, seventeen in Ceuta, thirty-three in Algeciras, and thirty in Valladolid, among them the Civil Governor. Few towns escaped the carnage as Freemasons in Lugo, Zamora, Cadiz and Granada were brutally rounded up and shot, and in Seville, the entire membership of several lodges were butchered. The slightest suspicion of being a mason was often enough to earn a place in a firing squad, and the blood-letting was so fierce that, reportedly, some masons were even hurled into working engines of steam trains. By 16 December 1937, according to the annual masonic assembly held in Madrid, all masons that had not escaped from the areas under nationalist control had been murdered.

After the victory of dictator General Francisco Franco, Freemasonry was officially outlawed in Spain on 2 March 1940. Being a mason was automatically punishable by a minimum jail term of 12 years. Masons of the 18º and above were deemed guilty of ‘Aggravated Circumstances’, and usually faced the death penalty.

According to Francoists, the Republican Regime which Franco overthrew had a strong Masonic presence. In reality Spanish Masons were present in all sectors of politics and the armed forces. At least four of the Generals who supported Franco’s rebellion were Masons, although many lodges contained fervent but generally conservative Republicans. Freemasonry was formally outlawed in the Law for the Repression of Freemasonry and Communism. After Franco’s decree outlawing masonry, Franco’s supporters were given two months to resign from any lodge they might be a member of. Many masons chose to go into exile instead, including prominent monarchists who had whole-heartedly supported the Nationalist rebellion in 1936. The common components in Spanish Masonry seems to have been upper or middle class conservative liberalism and strong anti-clericism.

The Law for the Repression of Freemasonry and Communism was not abrogated until 1963. References to a “Judeo-Masonic plot” are a standard component of Francoist speeches and propaganda and reveal the intense and paranoid obsession of the dictator with masonry. Franco produced at least 49 pseudonymous anti-masonic magazine articles and an anti-masonic book during his lifetime. According to Franco:

“The whole secret of the campaigns unleashed against Spain can be explained in two words: masonry and communism… we have to extirpate these two evils from our land.”

END_OF_DOCUMENT_TOKEN_TO_BE_REPLACED

Raised to a Master Mason in 1908, at Harmony Lodge No. 17 in Washington, DC, Carl H. Claudy  served as the Master and eventually as Grand Master of Masons … END_OF_DOCUMENT_TOKEN_TO_BE_REPLACED

In this final installment of the Faith Hope and Charity series, we consider the symbolism of charity, or perhaps better called love. It is this attribute that … END_OF_DOCUMENT_TOKEN_TO_BE_REPLACED

In this installment of the Symbols and Symbolism of Freemasonry, we examine the text of Albert Mackey's Encyclopedia of Freemasonry on the symbolism of … END_OF_DOCUMENT_TOKEN_TO_BE_REPLACED

In this installment of the Symbols and Symbolism of Freemasonry, we consider a reading of Albert Mackey's text on the subject of Faith as it pertains to … END_OF_DOCUMENT_TOKEN_TO_BE_REPLACED