You are here: Home / Archives for study

One of the most extensive collections of esoteric work is in jeopardy of being dispersed into the hands of private collectors.

The Ritman Library, known as the Bibliotheca Philosophica Hermetica comes from the private collection of books by businessmen Joost R. Ritman who turned his private collection of manuscripts and printed works in the field of Hermeticism into a library of the Hermetic tradition, to show the interrelatedness between the various collecting areas and their relevance for the present day study.

Today, the renowed Bibliotheca Philosophica Hermetica (BPH) is in grave danger because of a financial conflict with Ritman, and the Friesland Bank.

An online petition has been started to save the library, which you can sign here, and chronicles the dissolution of the library, saying:

It is widely known that the Bibliotheca Philosophica Hermetica in Amsterdam, was in great danger in the 1990s, when the ING bank took possession of the collection and threatened to sell it. Fortunately, the Dutch government intervened: the BPH was put on the list of protected Dutch heritage, and the State eventually acquired over 40% of it. The books remained at the same physical location, integrated with the rest of the collection, and the government would eventually acquire all of it.

As part of this process, there were great plans for further expansion. Largely due to the financial crisis and a change of government this was taking somewhat longer than originally anticipated, but nobody doubted that the library was safe.

Last week this turned out to be incorrect. An extremely valuable medieval manuscript owned by the BPH (The Grail of Rochefoucauld – the oldest known Arthur Manuscript) was put on sale at Sotheby’s, and this triggered a reaction from the Friesland Bank, which took possession of the library, that had apparently been brought in as collateral, in order to get back a 15 million euro loan from mr Ritman.

At present the BPH is closed, and intense negotiations are going on behind closed doors. It is impossible at this moment to predict the outcome, but there is no doubt that the situation is extremely serious. There is a very real possibility that the Friesland bank will try to sell at least 60% of the library that is still owned by Mr. Ritman, and nobody knows what implications this will have for the rest of the collection and the BPH as a whole, including its staff. The brand-new government of the Netherlands has announced a program of radical financial cuts in the culture section and elsewhere, which makes a renewed intervention from that side highly unlikely.

If the Ritman library would go down, this would mean an enormous blow to international scholarship in hermetic studies. The damage would be irreversible. By signing this petition you express your concern, and ask the Dutch government and the Friesland bank to do their utmost to ensure that the collection will be saved and will remain available for the international scholarly community.

What you can do.

Its a challenge to say what one can do in such an situation, but there are some things one can do to express their concern.

The library itself can be found on line at Bibliotheca Philosophica Hermetica. 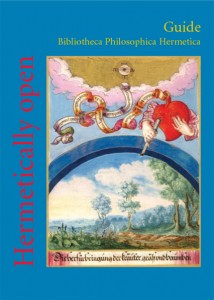 You can see by their Guide the bredth and work of the collection.

In the colelction of work, you one can study and explore the depth of Hermetic study, which the library has divided into the following principal collecting areas:
Hermetica
Alchemy
Mysticism
Rosicrucians
Gnosis & Western Esotericism

I HERMETICA
This collecting area contains works attributed to Hermes Trismegistus, other neo-Platonic works, patristic testimonies to the Christian reception of Hermes and works testifying to the influence of the Hermetica from the Early Middle Ages through to the present day. Placed at the beginning is a general section with relevant historical studies.

II ALCHEMY
The general section at the beginning contains a great number of art historical works and plate books on the subject of alchemy and its symbols. There are also specialized periodicals in the field of alchemy available, such as Ambix and Chrysopoeia (both complete).

A number of source texts and secondary works from Greek, Oriental, Arabic and Jewish, to Midieval and Western Alchemy.

III MYSTICISM
The BPH particularly collects medieval and later Western mystics having a demonstrable affinity with Hermetic thought, amongst whom Meister Eckhart, Suso and Tauler.

From early mysticism to mystical spiritualism through the centuries, the Library has a wide collection of works to research from, including a selection on Sufism.

The BPH collection spans work from the original Manifestos to more modern workings of the S.R.I.A, Max Heindel’s Fellowship, A.M.O.R.C., O.T.O./O.R.A., and other relevant developments.

This principal collecting area includes various currents in addition to Hermetism, Alchemy,
Mysticism and Rosicrucians which express a spirituality mainly manifesting itself outside the confines of the institutionalized religions. At the same time they feed and reinforce the core of the collection.

Needless to say, the collection is both extensive and necissary for modern study of the Hermetic Tradition.

The ‘Way of Gnosis’ or the ‘Way of Hermes’ leads to this ultimate goal: the experience of divine reality, which cannot be learnt, but can only be personally experienced (gnosis). Therefore, if one has knowledge, he is from above. If he is called, he hears, he answers, and he turns to him who is calling him, and ascends to him. And he knows, in what manner he is called.  Having knowledge, he does the will of the one who called him, he wishes to be pleasing to him, he receives rest. Each one’s name comes to him. He who is to have knowledge in this manner knows where he comes from and knows where he is going.

From: The Gospel of Truth by the gnostic Valentinus,one of the texts found at Nag Hammadi

Take a minute and sign the petition, and if you are passionate about the library, take the extra step and send a note to save the collection.

END_OF_DOCUMENT_TOKEN_TO_BE_REPLACED

In this final installment of the Faith Hope and Charity series, we consider the symbolism of charity, or perhaps better called love. It is this attribute that … END_OF_DOCUMENT_TOKEN_TO_BE_REPLACED

In this installment of the Symbols and Symbolism of Freemasonry, we examine the text of Albert Mackey's Encyclopedia of Freemasonry on the symbolism of … END_OF_DOCUMENT_TOKEN_TO_BE_REPLACED

In this installment of the Symbols and Symbolism of Freemasonry, we consider a reading of Albert Mackey's text on the subject of Faith as it pertains to … END_OF_DOCUMENT_TOKEN_TO_BE_REPLACED

In this edition of Freemason Information’s Symbols and Symbolism we consider, together, the four cardinal virtues of Freemasonry as gathered form Albert … END_OF_DOCUMENT_TOKEN_TO_BE_REPLACED