You are here: Home / Archives for ties

–  What does a tie represent in the workplace? 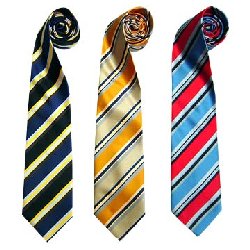 The Wall Street Journal recently ran an article on the decline of men wearing dress ties to work. They quoted a Gallup Poll that said the number of men who wear ties every day to work last year dropped to a record low of 6%. I’m not sure I agree with this number but there is no doubt ties have greatly diminished in the business world. I still put one on when I’m dealing with a customer and I do so as a sign of respect for the other party. Today it seems the only people who wear ties are politicians, newscasters, attorneys, doctors, and corporate executives, all of which do so as a sign of authority. And maybe they’re right.

Historically, learning to tie a tie marked a young man’s passage to manhood. But I don’t think there are a lot of men in the workforce who know how to tie a tie anymore, which I consider a little strange. Most newscasters know how to properly tie a tie, as do attorneys, but I’m starting to see politicians with sloppy looking ties. There are not too many things worse in a business setting than to be caught wearing a lousy clip-on.

In addition to how a tie is tied, I learned a long time ago the length of the tie and its relation to the belt buckle is important. In theory, long ties represent excessive behavior, and short ties infer personal inadequacies. Every once in awhile you see a bow tie or a western string tie, but I think they are worn more for a giggle than anything serious. The tie used to be the perfect present for holidays such as Father’s Day or Christmas, but most of the time we got a tie we wouldn’t be caught dead in. This resulted in closets full of ties we never threw away in fear we might offend someone. For example, I probably have a couple dozen ties in my closet, but I only have three that I regularly wear. I also have ties for special occasions, such as the Christmas holidays. I also have one representing my family’s Scottish Clan, but my favorite is one my father gave me years ago; It shows a series of small jackass’ sitting down with the following small letters underneath each one, “Y.C.D.B.S.O.Y.A.” Translation: “You Can’t Do Business Sitting On Your Ass.” It makes a great conversation piece.

As I said, I don’t know if I agree with the Gallup Poll’s 6% figure as I am starting to see people starting to wear ties again, particularly salesmen who use them to spruce up their image in front of customers. Frankly, they look much more professional than the typical corporate Polo shirt.

Now I know a lot of young men will read this and still be adamantly opposed to wearing ties but as I said earlier, it is a sign of respect. If this is of no interest to you, I’m sure you’ll continue to wear whatever you want, but for those of you who are interested in making a positive and professional impression, perhaps its time to go into the closet and pull out a couple of ties.

END_OF_DOCUMENT_TOKEN_TO_BE_REPLACED

Raised to a Master Mason in 1908, at Harmony Lodge No. 17 in Washington, DC, Carl H. Claudy  served as the Master and eventually as Grand Master of Masons … END_OF_DOCUMENT_TOKEN_TO_BE_REPLACED

In this final installment of the Faith Hope and Charity series, we consider the symbolism of charity, or perhaps better called love. It is this attribute that … END_OF_DOCUMENT_TOKEN_TO_BE_REPLACED

In this installment of the Symbols and Symbolism of Freemasonry, we examine the text of Albert Mackey's Encyclopedia of Freemasonry on the symbolism of … END_OF_DOCUMENT_TOKEN_TO_BE_REPLACED

In this installment of the Symbols and Symbolism of Freemasonry, we consider a reading of Albert Mackey's text on the subject of Faith as it pertains to … END_OF_DOCUMENT_TOKEN_TO_BE_REPLACED