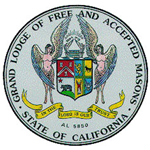 About the Grand Lodge
During the Gold Rush of 1849, thousands of settlers came to California in search of fortune. Those who were Masons brought their rich traditions with them, soon establishing some of California’s first Masonic lodges in the mining towns of the Gold Country. In 1850 — the same year that California became a state — the Grand Lodge of California was established in Sacramento.

The Grand Lodge of California does not have a listing on Wikipedia.

Some of what I found on my excursion there:

Visually, the site it very clean and crisp with an immediate appeals to the eye.  Both bright and interactive it has a strong professional presence.  At the first load of the page is an attention grabber flash image of George Washington laying a corner stone that makes a quick transition from black and white to color introducing a number of interactive boxes for the visitor to explore.  In those boxes are several of the elements that Freemasonry promotes including Tolerance, Personal Growth, Family, Philanthropy, Ethics, and Freedom.  Each of the images are click able to display an image and an aphorism to the virtue and a member that exemplifies it.

Overall the layout is straight forward and in the places where it needs to delve deep with pull down menus with links to additional pages.

Visually, the site does not link overtly to the state of California in that the graphics could easily be extended to any other state with a quick change of the name California.  Using the image of Washington in such a prominent position distracts from the prominence being on the state instead emphasizing a small part of Masonic history.

Prominent on the page at the top is a link to news and events which with a quick click hover over opens a list of items to select from (though disappointedly not events).  In the list are several choices of interest to many, including past issues of the California Freemason magazine, press information, and the Grand Masters itinerary.  What I did not find was a calendar of events, at least listed as such, as upcoming activities were listed under “news”.  In the news section I did find an article on the websites award of excellence for its design and content. (Congratulations!)

The site itself is very flexible as it is a custom build with a great deal of development potential.  In many respects the site has been developed out to the extent that it needs to be, as it covers most of what the Grand Lodge needs to communicate including contact info of the Grand Lodge, its leadership, its charitable endeavors and scholarships, public events, and member information.

The Ca GL site definitely gives you your times worth of material to look at.  What makes the content work is that the various sections are short and to the point for what they communicate.  In some instances, it leaves the reader wanting more (as in the history), but in most it gives just enough to encourage the reader to take the next step, such as the How to become a mason | information section.  It also transitions well from talking about California Masonry and how to become one to a link for “more info”, which takes you to a detailed and smart form for the user to fill in.  Interestingly, it does not put as the priority the request to become a member, rather weaving it into it in to the offering of choices making it less about the conversion and more an informed reader’s choice.

One feature that I do like is that each page carries the navigation to the other pages and makes ones visit there easy to get around.  This is a function of the sites navigation (both the top and the side) that one can jump from page to page as they explore the site.  It also uses the right side to feature ad blocks of relevant items for the visitor to click, such as the upcoming 150th Grand Lodge communication and opportunities to charitably give.  Again, this is a very smart way to entice the visitor (both mason and non) to explore and find out more information.

Something I did not find were a variety of external links to sites not immediately tied to the grand Lodge.  This is good in that it keeps the traffic on the site, but bad in that it does not illustrate partnerships or even California lodge sites.  My guess is that it functions to keep an unbiased position for one site or another and keeps the specter of bias away from any particular site.  This is good and bad in that it keeps bias out (good) but fails to illustrate the breadth of the fraternity in the state, country, or world.  Under the related organizations tab there is a list of many Appendant national bodies and links to their websites.

Generally, the informational content is very good, being both enticing and informative setting the tone that Freemasonry in California is a strong and vibrant institution with lot of history and goings on, always giving enough information to make the viewer want to find out more.

Look and Feel.
As I mentioned above, the site is very crisp and clean, with a smart and professional look, while not being overly conservative or “institutional”.  The use of warm colors (deep reds, warm grays, with spot photos) definitely makes the pages inviting to the eye.  Even the mix of serif and san serif fonts is effective at differentiating between the artistic branding and the content.  There is definitely some thought that has been put into the site, which is very evident in its details.

Overall:
From a first time visitor’s point of view, I think that the Grand Lodge site would be very well received and make a very valuable impression on them as to the organization.  It is clear, warm, and full of information.  It does not try to overtly convert the reader into becoming a member, but rather seems to take the viewer on a journey into the site and its wealth of information.  And, on every page is a constant link on how to join, which is a suitable conversion point amidst all of the sites content.

The flip side of that equation is the returning visitor or the member’s visit, which is just as meaningful and interesting.  Because there is a frequently updated news section, there is something to continue to come back to regularly and often so as to stay up-to-date on the goings on around the state.  With so much content going in, what seems to be missing is a way to subscribe to the news, which could be easily remedied with an RSS feed from it or a newsletter sign up form, which seems just a step away from connecting the site to its membership.  Because it necessitates the frequent return trip to pick up the news, it runs the risk of not reaching all the members who may come across the site because the updated news is buried three links in on the news & events section.  Moving the news (via a feed or site dynamics) to the front page would easily transform the site from a single destination to a frequent communicator to the membership AND public showcasing all of the activities that they can participate in.  Another alternative is a means to subscribe to the news that visitors can opt into.  Much like receiving a mailer at home, frequent updates would keep the GL in mind as news rolls out.

Overall I think the site handles its conversion well in that in the information it presents, it portrays the fraternity in a very positive, professional, and meaningful way.  It does have a bit of a disconnect from the state in that its use of art seems more a convention of east coast Masonry (Washington and the cornerstone) but once you dig into the site, it loops back in enough of the goings on to illustrate the membership of the state.

A feather in the cap of the GL of CA is the Henry Wilson Coil Library and Museum which frequently hosts a selection of shows and material of great interest to masonry.  With out going into great detail on the collection they do have a fantastic new website that beautifully illustrates its collection and goings on, which presents it as a must see destination of San Francisco art and history collections.   You can see the Henry Wilson Coil Museum and Collection live atop Nob Hill in San Francisco.

Coming up next – The Grand Lodge of Colorado

I wanted to give a quick thank you to Br. Brent Morris and the Scottish Rite Journal for their mention and piece on the Masonic Central Pod cast in their July/August 2009 edition.

We have a tremendous amount of respect for the work that the Scottish Rite promulgates and appreciate that they took the time to include us in their publication.

END_OF_DOCUMENT_TOKEN_TO_BE_REPLACED

Raised to a Master Mason in 1908, at Harmony Lodge No. 17 in Washington, DC, Carl H. Claudy  served as the Master and eventually as Grand Master of Masons … END_OF_DOCUMENT_TOKEN_TO_BE_REPLACED

In this final installment of the Faith Hope and Charity series, we consider the symbolism of charity, or perhaps better called love. It is this attribute that … END_OF_DOCUMENT_TOKEN_TO_BE_REPLACED

In this installment of the Symbols and Symbolism of Freemasonry, we examine the text of Albert Mackey's Encyclopedia of Freemasonry on the symbolism of … END_OF_DOCUMENT_TOKEN_TO_BE_REPLACED

In this installment of the Symbols and Symbolism of Freemasonry, we consider a reading of Albert Mackey's text on the subject of Faith as it pertains to … END_OF_DOCUMENT_TOKEN_TO_BE_REPLACED