You are here: Home / Archives for WHO HAS GOT YOUR BACK

WHO HAS GOT YOUR BACK

– A lesson of loyalty in the workplace, and in life. 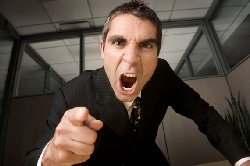 In the office, we like to believe our fellow co-workers will back us up when push comes to shove. Actually, we’re being quite naive when this occurs. To illustrate, there was a systems manager in Chicago who had grown weary of the petty politics practiced by his boss, the I.T. Director. Projects were late, none of the systems were integrated, end-users were unhappy, and they found themselves in a constant fire-fighting mode (maintenance) as opposed to conquering new challenges. Instead of implementing discipline and organization, the Director played political games pitting his workers against each other, and morale deteriorated. The systems manager’s staff was unhappy and frequently vented their frustrations to him. Conditions got so bad, the manager told his staff he was going to march into the Director’s office, register a formal complaint and threaten that he and his department were prepared to resign. Everyone thought this was a bold and imaginative move which they endorsed.

The Director listened patiently. When the manager was finished, the Director asked for his resignation which the manager produced on the spot. The manager then collected his belongings, told his staff what had just occurred, and said he would be in the bar down the street if anyone would like to join him afterwards. To his surprise, nobody joined him.

Despite what the manager’s staff had told him, that they would resign en masse, they balked. The manager had drawn his confidence from his staff and was sure they would follow him out the door. He was surprised when not one person followed. It was a difficult lesson to learn.

Who has got your back? As the manager discovered the hard way, nobody. There will be times in your life when you are angry over an issue or someone. Your contemporaries may encourage you to act, but the truth is, you are on your own. Think twice. If you threaten to resign or stage a coup d’etat, understand two things: someone will inevitably call your bluff, and; realize you are doing this on your own. Your friends and co-workers may not feel as passionately as you do and may fear for the safety of their careers. In other words, you are advised to speak for yourself and do not rely on the support of others. It will not materialize.

The truth is, co-workers may do favors for you, but do not expect them to watch your back when push comes to shove. In such occasions, it is every man for himself.

The lesson learned by the manager is simple: Speak from your own convictions, not someone else’s.

END_OF_DOCUMENT_TOKEN_TO_BE_REPLACED

In this final installment of the Faith Hope and Charity series, we consider the symbolism of charity, or perhaps better called love. It is this attribute that … END_OF_DOCUMENT_TOKEN_TO_BE_REPLACED

In this installment of the Symbols and Symbolism of Freemasonry, we examine the text of Albert Mackey's Encyclopedia of Freemasonry on the symbolism of … END_OF_DOCUMENT_TOKEN_TO_BE_REPLACED

In this installment of the Symbols and Symbolism of Freemasonry, we consider a reading of Albert Mackey's text on the subject of Faith as it pertains to … END_OF_DOCUMENT_TOKEN_TO_BE_REPLACED

In this edition of Freemason Information’s Symbols and Symbolism we consider, together, the four cardinal virtues of Freemasonry as gathered form Albert … END_OF_DOCUMENT_TOKEN_TO_BE_REPLACED