You are here: Home / The Bee Hive / The Bordeaux Conference 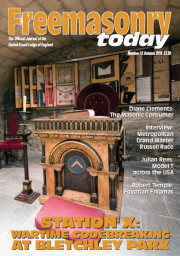 The latest issue of Freemasonry Today, the official journal of the United Grand Lodge of England, contains an article on the Bordeaux Conference. This was a three day gathering at the University of Bordeaux III and the Museum of Aquitaine in Bordeaux held in July of this year.

The conference’s first presentation was by UCLA Professor of History, Margaret Jacob, certainly no stranger to regular readers here on Freemason Information.  She brought all up to date on the latest findings concerning women’s Freemasonry in its earliest stages of Europe in the 1700s.

And right behind Jacob was a presentation of the female Masons in the French Royal family before the French Revolution delivered by Dr. Janet Burke, associate Dean of Barrett College, Arizona State University. It was revealing to all when Burke informed the conference that Josephine Bonaparte became the head of French female Freemasonry.

Freemasonry Today goes on to lament the fact that women in Freemasonry are not considered serious Masonic research in the British Isles and goes out of its way to mention the other Brutish scholars who made presentations – Diane Clements, Susan Snell, Dr. Robert Collis, Dr. Robert Peter and Professor Andrew Prescott. As this is an official publication of the UGLE, perhaps the Grand Lodge sentiment across the channel is shifting to a more benign attitude towards female Freemasonry and Co-Masonry. One can only speculate what winds of change might drift across the Atlantic to place American female Freemasonry in a more acceptable light.

What can be said is that author Brother Karen Kidd is working diligently on a new book which will be the subject of further enlightenment as soon as Freemason Information receives a copy.

In the meantime I am reminded of this poignant axiom – Nothing stays the same, change is always happening.

END_OF_DOCUMENT_TOKEN_TO_BE_REPLACED

Raised to a Master Mason in 1908, at Harmony Lodge No. 17 in Washington, DC, Carl H. Claudy  served as the Master and eventually as Grand Master of Masons … END_OF_DOCUMENT_TOKEN_TO_BE_REPLACED

In this final installment of the Faith Hope and Charity series, we consider the symbolism of charity, or perhaps better called love. It is this attribute that … END_OF_DOCUMENT_TOKEN_TO_BE_REPLACED

In this installment of the Symbols and Symbolism of Freemasonry, we examine the text of Albert Mackey's Encyclopedia of Freemasonry on the symbolism of … END_OF_DOCUMENT_TOKEN_TO_BE_REPLACED

In this installment of the Symbols and Symbolism of Freemasonry, we consider a reading of Albert Mackey's text on the subject of Faith as it pertains to … END_OF_DOCUMENT_TOKEN_TO_BE_REPLACED