“A beautiful system of morality, veiled in allegory, and illustrated by symbols.”

The above quote is the description of Masonry that is most often given to the initiate in order to describe the nature of the institution. It is so oft repeated that I suppose many Freemasons don’t give much thought to its meaning. However, when examined closely this description of our order gives us a clear picture of the purpose of our fraternity.

Let us take the first part of the phrase: “A beautiful system of morality.” This is fairly easy to understand. Freemasonry is school of moral instruction. Throughout the three degrees, the initiate is taught numerous lessons on the subject of morality. These degrees discuss many different aspects of that concept including the physical and spiritual components of morality. In many ways, religion serves a similar role in a man’s life. Every religion teaches man to walk upright before God, gives him a sense of good and evil, and encourages him to pursue righteous ventures throughout his life. While Masonry is not a religion, it shares the purpose of moral instruction. However, Masonry’s method of teaching morality is very peculiar in modern times.

At this point, let us shift our focus to the following words: “veiled in allegory and illustrated by symbols.” The word ‘allegory’ is described by the dictionary as being “a symbolical narrative.” 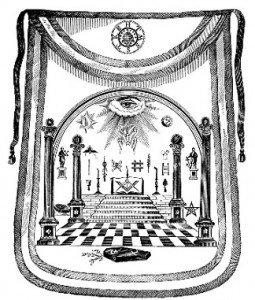 A sketch of George Washington’s Masonic apron which features some of Masonry’s deep symbolism.

A symbolical narrative is any story crafted in order to portray a deeper meaning. The Masonic symbols in the legend of the Third Degree, Aesop’s Fables, and Jesus’ parables are all examples of allegory. Masonry uses allegorical tales throughout the Symbolic Lodge, York Rite, and Scottish Rite in order to teach its system of morality. In addition to the legends of each degree, a multitude of symbols are used to illustrate and reinforce the concepts of the degrees. This is where Masonry differs from many modern systems of moral instruction. Today, most religions and philosophies convey their moral teachings through a series of long lectures presented either written or orally. They utilize very little symbolism in order to educate their followers. Albert Mackey explains this in The Symbolism of Freemasonry.

Masonry as an organization may only be a few centuries old, but its philosophical lessons can claim the most ancient of lineages. The moral education found inside the lodge is similar to that taught by any great religion, initiatic order, or school of philosophy. Take a second to think about your personal Masonic journey. Consider the moment when you were brought to light and received your first symbolic instruction. Think about how the solemn and deep language of symbolism enhanced your experience. Now imagine that the same lessons had been explained to you without the use of allegory or illustrated symbols. If you realize that the symbolic instruction provided a greater understanding of those moral precepts, you have discovered the true nature of Freemasonry.

The core of Freemasonry, and its Masonic symbols, is its allegorical and symbolic instruction. Without it, the order would not exist for it would have no purpose. It is Masonry’s language of symbolism that makes it appeal to the candid and industrious inquirer. It is Masonry’s allegorical legends that expose those ancient truths concealed within the fraternity. Symbolic instruction is our language, it is our identity, and it unveils the whole of Freemasonry.