You are here: Home / The Bee Hive / A Fraternity Who Helped Found This Nation 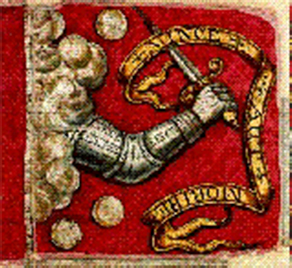 The Bedford Flag is the oldest complete flag known to exist in the United States.  It is celebrated as the flag carried by the Bedford Minuteman, Nathaniel Page, to the Concord Bridge on April 19, 1775, the beginning of the American Revolution, but it was already an antique on that day.  It was made for a cavalry troop of the Massachusetts Bay militia early in the colonial struggle for the continent that we call “the French and Indian Wars.”

The flag is a piece of crimson silk damask measuring about 27” long by 29” wide.  This small square shape indicates that it was a cavalry flag.  Into the rich red damask is woven a pattern of pomegranates, grapes, and leaves.  The design is painted on both sides of the flag, mainly in silver and gold.  The emblem consists of a mailed arm emerging from clouds and grasping a sword.  Three cannonballs hang in the air.  Encircling the arm is a gold ribbon on which the Latin words “VINCE AUT MORIRE” (Conquer or Die) are painted. On the reverse of the flag, the design is slightly different: the sword extends in front of the ribbon instead of behind; it is held left-handed; and the motto is read from bottom to top instead of top to bottom.

A narrow area would have been folded and stitched to make a sleeve for the pole to go into.  Some of the holes the needle made are still faintly visible.  All but a single thread from the silver fringe that once edged the flag has been lost to history. That one strand was discovered microscopically during the flag’s 1999-2000 conservation at the Textile Conservation Center in Lowell, Mass. Evidence was also found that there may once have been a tassel attached at the hoist side of the flag.

THE ORIGIN OF THE FLAG

Exactly who made the flag and when it was made are not known. Physical and historical evidence point to an origin early in the eighteenth century. The distinctive floral pattern woven into the damask has been dated by textile experts as appropriate to the early 1700s.

When did the Page family first receive the flag? Displayed in the Flag Room in the Bedford Free Public Library is an original commission dating 1737.  It names Minuteman Nathaniel Page’s father John “Cornett of the Troop of horse.”  A cornet was the cavalry officer just below lieutenant whose duty it was to bear the flag.  In fact, Nathaniel’s father, uncle and grandfather are all mentioned within the Bedford and Billerica Town Records as “Cornet Page,” indicating that a Page had been carrying the flag for the local militia troop as early as 1720. It was the custom in the English militia for the colonel of the regiment or the new captain of a unit, not the cornet, to arrange for the flag.  Thus it was not a member of the Page family but an officer of higher rank who designed and procured the flag.

Similarity to sketches of a flag made soon after 1660 for another Massachusetts cavalry, the Three County Troop, has made historians wonder if perhaps the Bedford Flag is indeed that early flag.  However, the emblem, an arm holding aloft a sword, is a common one in European heraldry during the sixteenth and seventeenth centuries and is certainly not unique to the Bedford Flag. Most tellingly, a spectroscopic analysis of the paint used on the emblem revealed a pigment called “Prussian blue” that did not exist before 1704, so the flag cannot date from before that year.

THE FLAG’S ROLE
DURING THE REVOLUTIONARY WAR

The flag was still in the custody of the Page family at the time of the American Revolution, and it is believed in Bedford that Minuteman Nathaniel Page took it with him to the battle at Concord.  Nathaniel told the story to his grandson, Cyrus, and it was written down after his death by the nineteenth century historian, Abram English Brown.  This account says:

“Our people were not surprised when the messenger reached this house…  We had agreed at the last drilling to meet, in case of alarm, at the tavern in the center of the town, kept by Jeremiah Fitch, sergeant of the militia company.  The horseman banged on the house and cried out, ‘Up, Mr. Page, the regulars are out.’  We were not long at our preparations, and were soon at the tavern.”

A. E. Brown continues, “On the arrival of the [Bedford] Company at Concord, they assisted in removing the stores to places of greater safety.  Tradition says that Cornet Nathaniel Page laid down his flag and went to work, and when returning to look for it ‘found the boys had got it and were playing soldiers.’”  He took it up and went to face the British regulars at the North Bridge.

While there is no contemporary account to corroborate this story, Nathaniel Page is listed in the official military rolls of the men who were paid for service in the American forces on April 19th.  The flag is more than old enough to have been there with him on that day. His father, uncle and grandfather had served as cornets in the militia.  Did Nathaniel bear the flag to Concord as he said he did? That is clearly quite possible.

END_OF_DOCUMENT_TOKEN_TO_BE_REPLACED

Raised to a Master Mason in 1908, at Harmony Lodge No. 17 in Washington, DC, Carl H. Claudy  served as the Master and eventually as Grand Master of Masons … END_OF_DOCUMENT_TOKEN_TO_BE_REPLACED

In this final installment of the Faith Hope and Charity series, we consider the symbolism of charity, or perhaps better called love. It is this attribute that … END_OF_DOCUMENT_TOKEN_TO_BE_REPLACED

In this installment of the Symbols and Symbolism of Freemasonry, we examine the text of Albert Mackey's Encyclopedia of Freemasonry on the symbolism of … END_OF_DOCUMENT_TOKEN_TO_BE_REPLACED

In this installment of the Symbols and Symbolism of Freemasonry, we consider a reading of Albert Mackey's text on the subject of Faith as it pertains to … END_OF_DOCUMENT_TOKEN_TO_BE_REPLACED