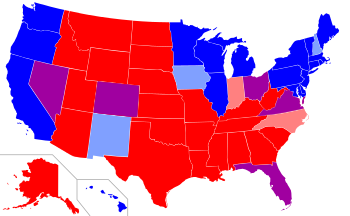 The United States of America is like no other nation in the world. There are two diametrically opposed cultures within the US where compromise is not possible. Nothing is more evident to the truth of this statement than to watch the nation during a Presidential election year.  Democrats and Republicans, Liberals and Conservatives are in possession of two different world views. These views translate into two different life styles. The positions held by each side are considered basic life core principles that cannot be changed, diluted or compromised.

There are Liberals and Conservatives in other nations but their belief systems are not ingrained into stone and compromise is not a dirty word. Take Canada to our north. There are many different social, political and religious views in Canada and a diversity of culture in some areas while in others a much more sameness. The differences foster much discussion and debate but seldom WAR! Canadians who are not on the winning side of an issue have more of an attitude of, “Oh well, life goes on.” While here in the sates you will find both sides employing deliberate misinformation, loud ill tempered language leading to a radicalization that can give way to outright violence. Ask yourself when was the last time a Canadian Prime Minister or other prominent political figure was assassinated, or there was even a thwarted assassination attempt? In the United States we can point to the recent shooting of Congresswoman Gabrielle Giffords (where 6 others were killed), the attempt on Ronald Reagan, and the successful assassinations of Malcolm X, John F. Kennedy, Lee Harvey Oswald, Jack Ruby, Robert Kennedy and Martin Luther King.

And this is not a new phenomenon. You can go all the way back to the assassination of Abraham Lincoln to see how long this aspect of American Society has been going on. Right from our nation’s inception we were two different worlds joined together. In the beginning there was the small farming, commerce, business and trading North versus the big plantation system of the South practicing self sufficiency and isolationism. There were the slave holders versus the abolitionists.

No other nation suffered such a bitter, protracted Civil War with huge losses of life that left a bitterness that never really healed. Who else in Western Society had a Ku Klux Klan that in its heyday had a larger membership than Freemasonry?

This division is not just political. If it were it would not be so all persuasive. There is also a social, religious, economic and racial division separating Americans into two different camps. You can make a good case for there being two different American cultures. We might call them the heartland culture versus the cosmopolitan urban culture. It is two life styles that view most every aspect of living from a different, opposing perspective.

The role of government in society

What language we use

How we raise our children

The role of religion in society

What is taught in our public schools

How we regard our military

What social behaviors should be legalized

What should and should not be an entitlement

This all pervasive view of society and our role within in it has bled over into Freemasonry. We have Blue State Freemasonry and Red State Freemasonry. Just like the commerce based North versus the plantation South, Freemasonry has grown into two different versions of the same Fraternity. SOME of the differences are:

No foreigners, non English speaking         Any language, any nation

These and other differences have divided Freemasonry into sometimes warring camps. Our civil government under the Articles of Confederation soon changed into the United States of America under the Constitution and slowly evolved into more centralized control in Washington. From 13 states loosely joined in common cause we transformed ourselves into a united nation where citizens ultimately called themselves Americans.

Freemasonry never evolved like our civil government did. It has remained stuck in the Articles of Confederation stage. Each state Grand Lodge is like a nation unto its own. As the years have gone by the differences have become greater and magnified.

This is not a call for a National Grand Lodge nor a reinventing or remaking of American Freemasonry. But at the same time we must recognize that there is too much strife and discord, too many ill feelings and too much unmasonic conduct within American Freemasonry. Maybe 51 Grand Lodges are too many for the United States, leading to too many differences, too many rivalries with not enough cooperation. Perhaps there might be some voluntary consolidation.  Canada with somewhat the same area has much fewer Grand Lodges. Whatever American Freemasonry does voluntarily The Craft must find a way to come together with some commonality, reducing friction and strangling tight control while still permitting states their jurisdictional powers. It must find a way to bridge the gap between a Blue State and a Red State mentality. American Freemasonry needs to become a fraternity, a way of life, which embraces free thinkers as it has in the past, frees up Masonic creativity, and becomes a Craft of principles and virtues not of men.