At first I thought that the article was going to be complimentary. Oh it had the usual mischaracterizations of Freemasonry from those who are outside rather than inside the fraternity. But it began after the introductory “gobbledy goop” to explain in some pretty good detail the workings of the Masonic Child Identification Program or ChIP, also known, I guess, as Masonichip in Canada. 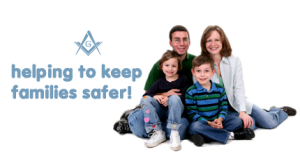 But then it got ugly. It went from it ChIP (Child ID program) won’t work as advertised, to it’s not monitored, especially by the government, to the DNA has no link to any national database, to what is entered into a computer can never be completely deleted so therefore the information could be misused to who knows what goes on behind closed doors?

Our provocateur is one Ms. Amy MacPherson of The Huffington Post Canada who bills herself as a Social and Rights advocate.

MacPherson ascribes to Freemasonry some sinister motive for collecting the DNA of children because it is not practical, relevant, usable, admissible or traceable.

I guess then in a scandal that would rival that of the Catholic Church, we (Freemasons) are all closet pedophiles just waiting to harm innocent children. Or better yet (or worse depending upon your perspective) we are organizers of a world-wide child abduction and kidnapping ring. If those don’t seem plausible we will let you (the reader) assign the motive du jour.

And we will now let Ms. MacPherson do the talking.


A great distinction is made to ensure governments are nothing more than their supporters. Freemasons assert ownership of this project as an integral part of their mission statement [since archived]:

“We the Freemasons are the sole “sponsor” of the Masonic Safety Identification initiatives as developed in our various Masonic Grand Lodge Jurisdictions. As such we schedule the Events and coordinate the equipment, materials and volunteers necessary to conduct events. All groups and individuals are welcome to work alongside, but they are not referred as sponsors but listed and involved as “supporters”, “supporting partners”, “corporate partners”, “in collaboration with”, or “in cooperation with.”

They claim their services are superior to what a parent could accomplish at home, by recording the children’s data personally and providing their own “health care professionals” to collect their DNA samples.

These are either hired hands who answer to the Freemasons or members of the fraternity whose history and credentials are protected by the organization. There is no way to guarantee what happens behind closed doors and although they claim to delete sensitive information (the Canadian website states “No information is ever stored by the MasoniChIP program”), any computer savvy person knows that clicking an “x” isn’t permanent unless you format the entire system.

Parents are asked to trust an intriguing, private fraternity; to ensure that quality standards are met and family privacy is legally respected without any kind of oversight. Because Freemasons fund 100 per cent of the initiative, there is no opportunity to discuss issues regarding data ownership or how they feel about those technicalities in the privacy of their meetings.

Every Masonic Lodge may “jump on the bandwagon” [now archived] and choose to run the program differently. None are managed at the national level by an exact set of principles. The only thing they share is an internet portal [since archived], where everyone claims to expunge the information that was painstakingly collected.

Let us then consider the function of a DNA sample. If a child goes missing will police swab every glass and rock they come across for a match to find the trail? In the video for Massachusetts they claimed it would help Mason pick up a scent, but in all reality the clothes a child was last wearing will provide stronger notes and this can’t be the intended purpose. DNA has nothing to do with scent and its only use can be harnessed once a child has been located.

With somber scrutiny and if further tragedy struck, authorities would match remains with parental samples for definitive confirmation. It is the parents’ DNA that could aid in matching the unnamed, but only accredited laboratories are permitted to conduct the process. Whether a parent or child, collecting DNA cannot occur at an open park event, run by stranger volunteers and become admissible to the national database. The FBI continually quotes the DNA Identification Act of 1994 in establishing these requirements to be included within CODIS.

It is with great sadness for grieving families that we must note the Freemason project is not supported by government DNA databases. Although the superficial identifiers are surely helpful and Freemasons contribute to charitable acts in their communities, the most controversial component of the MasoniChip undertaking is not recognized for the purpose they advertise and state to parents.

Furthermore, a simple hair sample from children is all that was needed and in the United States only five of these cases are permitted per month, per licenced agency. (Downloadable from the FBI here.)

In Canada the situation is even more colluded, as the federal government won’t consent to a missing persons DNA database whatsoever. They cite privacy law and cost concerns as a barrier to its establishment; so the 50,000 families that already participated have shared their biometric markers with Freemasons for apparently no good reason. It is therefore peculiar the Masonic Grand Lodge of Canada would make bold claims to be working with Canadian law enforcement agencies to gain the trust of parents.

All in all they’ve registered 1.5 million children to date. The push is on to document as many possible, as keenly demonstrated by the event schedule for Ontario. From community halls to grocery stores, fairground booths, libraries and even chartered banks, the private fraternity will be on hand to collect everything about your children whether it’s relevant or not.

When it comes to the little people we’d do anything to protect them, but perhaps their families might give sober second thought to what exactly they’re signing in a contract with Freemasons. This DNA collection program is planned to be extended to the disabled community and seniors, but who benefits when it’s inadmissible to a certified registry of any sort?

And why is the face of government through public schools or police through public events, being placed on an effort from private organizations to mislead parents? Sharing one’s fingerprints and biometrics is a serious decision. For public safety we must insist that brokers of such events become transparent and regulated.

Why Are the Freemasons Collecting Our Children’s DNA?  Amy MacPherson, The Huffington Post Canada