You are here: Home / The Bee Hive / Mike McCabe Versus The Grand Lodge of New Jersey: Part 1 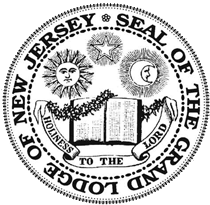 The ugly hand of unbridled power has once again been unleashed by another dictatorial, tyrannical, oligarchic Grand Lodge.  This time it is New Jersey. And the recipient, six time Past Master Mike McCabe, is not taking it lying down.

McCabe found that an unauthorized member of his Lodge was writing checks to the tune of $10,000 and not turning over $7,000 in receivables to the Lodge Secretary, but instead was depositing those funds into a Lodge checking account neither the Lodge Secretary or Treasurer knew existed. When he called this to the attention of his District Deputy he was told that if he had proof that this had taken place he needed to file formal charges against the Brother(s) involved at a Communication of his Lodge.

McCabe thought this peculiar because while he, like many other Brothers in this situation, might have a snippet of information only the Grand Lodge could investigate books and records fully to make a complete case and that needed to be done first before any charges were filed. McCabe’s District Deputy told him not to bring up the subject again unless he was willing to file charges. 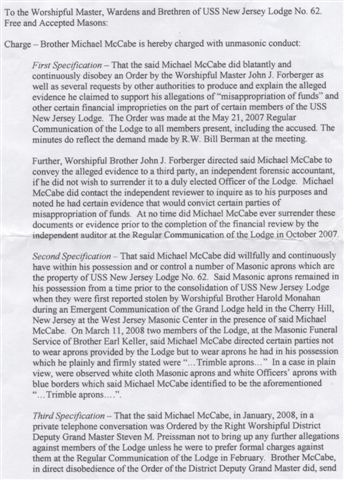 Both before and since this particular episode occurred, Lodge Secretaries and Treasurers have been suspended by Grand Lodge, for allegedly failing to provide their installed successors with a Lodge’s books and records.

McCabe persisted because Grand Lodge’s in-actions in this instance was even more puzzling since Lodge funds had been expended without the knowledge or consent of the Lodge’s elected fiduciary officers.  The existence of this Lodge checking account had been withheld from them.

And because he persisted and wanted the matter thoroughly reviewed it appears that for no legitimate reason, Masonic charges were filed against him, a Masonic trial conducted and he was eventually expelled. The Charges were threefold: 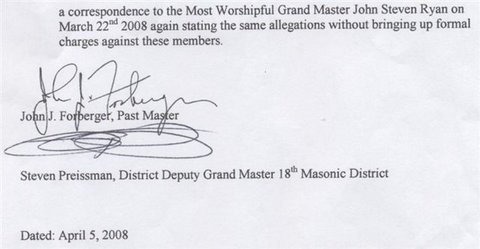 Charge #3 was a made up bunch of malarkey thrown in to make the situation look worse than it was. This charge was based on hearsay because the individuals who made the accusations concerning the theft of Lodge property were not the individuals who preferred and signed the charges against him. Grand Lodge rules require the person making the allegation must sign the charges. The individuals that signed this charge refused to testify, admitting that they had not been present when the alleged offense supposedly occurred.  Instead two other Lodge members testified in support of the allegation, one of these being the Deputy Grand Master. McCabe was found not guilty and exonerated on this charge but he was found guilty on the other two charges and expelled.

McCabe claims that 20 or more violations of Section 13, Charges and Codes for Trial, occurred at his trial as well as numerous other violations of the New Jersey Constitution.

In regards to charge #1 – “A Lodge cannot…..compel him to first submit his complaints to the Lodge” (Section 29-27)

In regards to charge #2 – “District Deputy Grand Masters have no authority to ……decide questions of Masonic Law” (Section 16-02). The power to decide all questions related to Masonic Law (or serious Masonic issues), rests solely within a Grand Master’s purview.

McCabe could not find another Mason to represent him so he represented himself and as the saying goes had a fool for a client.  It seems hypocritical that McCabe’s Grand Lodge was persecuting him for allegedly ignoring two bogus charges made against him, but turned a blind eye to the numerous violations of the Constitution permitted during his trial process.

Moreover a Mason brought up on charges to a Masonic trial is supposed to be tried on unmasonic conduct or a Masonic offense. According the Grand Lodge Constitution expulsion is reserved for individuals who have been found guilty in a civil court of law for committing 1st or 2nd degree criminal activities, or at a Lodge’s discretion, 3rd or 4th degree criminal offenses.

What McCabe was charged with was trivial and does not meet this criterion. Since when is notifying the New Jersey Grand Lodge of potential violations of its rules and regulations a criminal offense? Expulsion is not a punishment that fit the crime in this case.

Lastly McCabe alleges that the charges are unconstitutional and that a Grand Master willfully and knowingly violated his own Grand Constitution.

These and many other irregularities too numerous to mention constitute what McCabe alleges as a violation of his civil rights.

A legal opinion regarding civil rights violations from private and semi-public organizations has been offered by the US Supreme Court and was used in a decision between New Jersey homeowners and their Homeowner’s Association board.

“New Jersey is among the few states to require private entities to provide some Constitutional protections.  Most states have concluded that only governmental actors can interfere with an individual’s Constitutional rights. The U.S. supreme Court has agreed, but has held that states may provide broader protection if they choose, and the New Jersey courts have gone further in that direction than any others.”

The article on this court case also highlighted some important practical applications of the rights of those involved.

“In balancing the interests of the parties, [we conclude that the homeowners’] rights to engage in expressive exercises, including those relating to public issues in their own community …must take precedence over the [association’s] private property rights.”

“Your regulations must be fair and reasonable, they must not violate public policy, and they must be authorized by the community’s covenants or bylaws. That’s not new legal ground; just good governance and common sense.”

Grand Lodges are not exempt from Civil rights law that has been codified by civil governments. Because they are now a semi-private, semi-public corporation, Grand Lodges have brought themselves into the civil sphere and must adhere to civil constitutional guarantees that are required of corporations.

As such, when a Grand Lodge violates the rights of an individual member and does not follow its own published rules in its Constitution and refuses to follow civil rights as has been specified by civil law in regards to corporations, then an aggrieved member such as Mike McCabe has a legal case with Constitutional issues that buttress his claim that his civil rights were violated.

And right now all Mike McCabe is asking for is an appeal so that he can be heard again, with competent counsel to put forth his arguments based on the additional research he has accomplished.  As of this moment McCabe has shown no inclination to take his case into the civil courts. The Grand Lodge of New jersey would be wise to grant Mike McCabe an appeal and another hearing.

END_OF_DOCUMENT_TOKEN_TO_BE_REPLACED

Raised to a Master Mason in 1908, at Harmony Lodge No. 17 in Washington, DC, Carl H. Claudy  served as the Master and eventually as Grand Master of Masons … END_OF_DOCUMENT_TOKEN_TO_BE_REPLACED

In this final installment of the Faith Hope and Charity series, we consider the symbolism of charity, or perhaps better called love. It is this attribute that … END_OF_DOCUMENT_TOKEN_TO_BE_REPLACED

In this installment of the Symbols and Symbolism of Freemasonry, we examine the text of Albert Mackey's Encyclopedia of Freemasonry on the symbolism of … END_OF_DOCUMENT_TOKEN_TO_BE_REPLACED

In this installment of the Symbols and Symbolism of Freemasonry, we consider a reading of Albert Mackey's text on the subject of Faith as it pertains to … END_OF_DOCUMENT_TOKEN_TO_BE_REPLACED