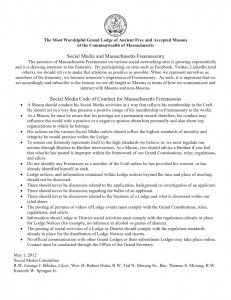 While most of these regulations are common sense rules promulgating proper protocol and etiquette, still there seems to be the continued penchant for Grand Lodges to feel that they have to control the behavior of their members. It was not so long ago that some Grand Lodges forbade its members to operate their own Masonic websites.

The regulations on videos, references to alcohol and games of chance, and the prohibition of communication with other Lodges and Grand Lodges using social media seems to be a bit draconian and to harken back to an era of stricter public moral regulation.

Freemasons are free thinkers and free – free from the restraints of conservative sectarian religious dogma. The attempt to CONTROL the daily lives of Freemasons rather than merely offering a pathway to enlightenment is a disturbing use of Grand Lodge power, especially in the 21st Century.