You are here: Home / The Bee Hive / Something To Die For

What Can Freemasonry Do For You?

A friend stopped by to visit with me the other day. He is a non Mason and a man of deep faith. Eventually the topic got around to Freemasonry and he asked me why I needed another church as he knew I was quite active in mine.  Now I have been aware for quite some time that there is always this tendency to classify Freemasonry as a religion and then critique or judge it on those grounds. Of course I protested vehemently that Freemasonry was not a religion and didn’t pretend to be one. 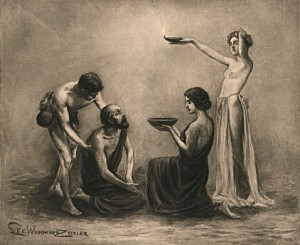 “Just the same,” he said, “even if I grant your point that Freemasonry is not a religion, what can it do for you that your church cannot do or is not already doing?” Now I muddled through with various platitudes spiced with an equal amount of protestations but I felt that I was continually on the defensive.

In the days since I have had time for reflection on the subject and I am now ready to take the offense. What is Freemasonry doing for me?

I started by looking at the tenets of Freemasonry – Brotherly Love, Relief and Truth.

Practicing Freemasonry is a pursuit of knowledge in a moral context, always seeking that which was lost, the truth, the whole truth and nothing but the truth.  Organized religion is likewise in a similar pursuit of truth – revealed truth that will put the seeker in a right relationship with the Grand Architect of the Universe. Freemasonry incorporates religious activity in its practice and most Masons would tell you that religion incorporates Freemasonry in its practice. While Freemasonry concentrates on the here and know, organized religion concentrates more on what’s to come.  Yet they both offer a pathway to the good life. So it wasn’t here that I could find my answer.

Freemasonry preaches charity to all mankind without expecting anything in return.  So does organized religion. The missions of my church in relieving pain and suffering and abject poverty are well documented. My answer was not to be found here either.

Freemasonry celebrates the tight bonding that comes from practiced camaraderie and my church offers a similar fellowship in the faith. It seems as if I had struck out.  But upon further reflection the camaraderie/fellowship thing just didn’t seem to be interchangeable.

In my entire life outside of Freemasonry and excluding my family, I have met one person, one friend who I am so close to that I would die for and he would willingly give up his life for me. Actually to classify that kind of a relationship as friendship is not doing justice to the bond that has been formed. Soul-mates might be a better word but it is most often used in a committed male-female relationship. But in this relationship that you would die for, you are close to being one person.  You know what each other is thinking, you know what the other wants often before it is asked and you never hesitate to rise to the other’s needs. It’s a oneness that brings with it much joy and much sharing of life’s ups and downs.

Within Freemasonry I have six additional friends I would die for and a couple of dozen more, if the association could be more often, would develop into such. But nowhere else has any other organization, society, group, institution or association spawned a kind of closeness that seems to be a vital part of what that organization offers, as Freemasonry has.

Fellowship in church is a shared activity centering on a relationship with God. Personal connections within that faith observance can be strong bonds – but of appreciation of mutual commitment rather than two humans merging or melting into one. There is a difference in being close to someone in the flesh and being close to someone in faith. They are two different experiences. Only the relationship with God transcends either.

But the stronger human to human relationship is that which is found in Freemasonry. As my mother used to say, “The proof is in the pudding.”  You will find in the great Masonic book, House Undivided

, by Allen Roberts that during the Civil War, the most difficult time in the history of our nation, this ugly conflict sometimes split families into two warring camps; that it split churches into two warring camps but it didn’t divide Freemasonry. A Confederate Freemason and a Union Freemason still held that strong bond of camaraderie and love for each other even on the battlefield.

Therefore I conclude that Freemasonry offers to me the most deep rooted relationships, outside that bonding with God and family, which I can obtain nowhere else. And that is something not only to die for but to live life at its fullest for.

END_OF_DOCUMENT_TOKEN_TO_BE_REPLACED

In this installment of the Symbols and Symbolism of Freemasonry, we consider a vital emblem of Freemasonry, the compass or compasses. Albert G. Mackey, in his … END_OF_DOCUMENT_TOKEN_TO_BE_REPLACED

Raised to a Master Mason in 1908, at Harmony Lodge No. 17 in Washington, DC, Carl H. Claudy  served as the Master and eventually as Grand Master of Masons … END_OF_DOCUMENT_TOKEN_TO_BE_REPLACED

In this final installment of the Faith Hope and Charity series, we consider the symbolism of charity, or perhaps better called love. It is this attribute that … END_OF_DOCUMENT_TOKEN_TO_BE_REPLACED

In this installment of the Symbols and Symbolism of Freemasonry, we examine the text of Albert Mackey's Encyclopedia of Freemasonry on the symbolism of … END_OF_DOCUMENT_TOKEN_TO_BE_REPLACED