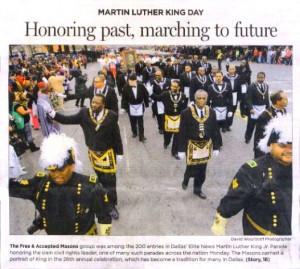 Reflecting on the last few years in Freemasonry, I have been remembering what a friend of mine always said, “Nobody knows who we are anymore.”  This was always followed by an intense debate over modern Freemasonry’s use of Institutionalized charity to solve that problem.  He thought all the charity work was great and just the thing to get Freemasons noticed.  I thought it was too expensive and time consuming, taking away from the practice of Freemasonry.

If you want people to know who you are then connect with the community.  This means getting active in the small local efforts to make your community better. One of the ways Freemasonry can get noticed is to march in a parade. Here you can see the Prince Hall Texas Masons marching through Dallas on Martin Luther King Day.  Leading the group is Deputy Grand Master Michael T. Anderson (on the left, front waving), no stranger to Freemason Information regulars. He made an appearance on Masonic Central which is archived here.

If you want to be of service to those in your area clean a highway, spruce up a park or maintain a ball field. Or have your Lodge host a hero’s night honoring a special teacher, fireman, policeman, social worker or charity service group. Hold the honoring ceremony outside the Lodge, open to the public and invite the press.  Another alternative is to run a blood drive offering a free breakfast to all who donate. If you have a hospital in your area regularly scheduled visitations to any and all would be most welcome. Local scholarships given by local Lodges, not Grand Lodges, will cement a friendly community relationship, provide a much better outlet for that Masonic charitable component and get Freemasonry noticed, all at the same time.

Where Freemasonry gets off on the wrong track is when it goes into big time, impersonal, costly and never ending charity – Institutionalized charity – aimed at everybody, to gain publicity. Or when Freemasonry runs costly television, radio and theater ads. Instead of making the product better they spend their money on trying to market Freemasonry. What they are trying to do is to increase the supply by hyping the demand when they really should be increasing the demand by hyping the supply. If that doesn’t seem to ring true, The Beehive will get Art Laffer to explain it to you.

The Mainstream Grand Lodge of Minnesota has announced that it will raise and donate $65 million to cure Cancer. A noble gesture for sure but how is this helping Freemasonry in that state? Think of all the more productive ways that money could be spent. The Grand Lodge could help any of its chartered local Lodges replace a costly building expense like a new furnace. It could run workshops and seminars to better educate the Brethren. It could pay for a speaker’s bureau to tour the state adding, in many cases, a much needed zest to boring business meetings. It could finance out of state large visitations beyond the budget of most Lodges. It could make the difference between a Lodge having to fold or a Lodge able to continue on. In essence Grand Lodge could do a lot to further the growth of Freemasonry and lead local Lodges in a more inspired, better educated and higher quality practice of Freemasonry. Improve the product and the membership will grow as a result of that effort. It is “Supply Side” Freemasonry at its best.

And Minnesota isn’t the only one who has chosen this path. The Mainstream Grand Lodge of Massachusetts now runs a massive health care system at multiple locations in addition to a very expensive CHIP program. Recently the Grand Lodge has doubled its Grand Lodge dues and fees that local Lodges must cough up, who in turn pass the burden onto the local Lodge Brethren. Many other Grand Lodges have similar such programs. This is “Vulture” Freemasonry at its worst.

What do massive charities, health systems and cash donations do for the advancement of Freemasonry within a jurisdiction? Why try to buy good will and notoriety when just practicing the virtues and tenets of Freemasonry will do more for you? If all the sweat, effort and money goes to marketing, advertising and financing others while bankrupting and diminishing Freemasonry, everybody loses. Why not try being side by side in the trenches with your community rather than an outsider trying to buy friends. And then go celebrate and march in a parade.