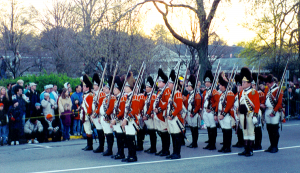 First I had the opportunity last week to speak at Lyles Middle School in Lexington, Massachusetts to the classes of a Lodge Brother who teaches history at the school.  I managed to talk to four periods of combined classes, my subject being the first battle of the American Revolutionary War in Lexington, Massachusetts . I traced the development of the Minute Men from 1643 to 1775 and showed what a pivotal part they had to play in the early days of the Revolution before a standing army was conscripted.

A good resource on the subject is the book,

“THE MINUTEMEN, The First Fight: Myths And Realities Of The American Revolution,” by former General John R. Galvin who went on to become an ambassador with the U.S. State Department and then dean of the Fletcher School of Law and Diplomacy at Tufts University.

Interwoven with the story was my own personal journey.

I spoke to the students about being born and brought up in Lexington, about being a member of DeMolay in Lexington and marching in the Patriot’s Day Parade, about joining Freemasonry and the Paul Revere Colonial Degree Team where I took the name of William Munroe, a Freemason who was a Sergeant in the Lexington Minutemen and who was stationed on an all night watch through the night of April 18, 1775 on the Lexington Green.

Six days later I attended one of the most intense Lodge meetings that the Pride of Mt. Pisgah #135, Most Worshipful Prince Hall Grand Lodge of Texas has held in its existence.  Pride of Mt. Pisgah is building a brand new Masonic building of its own, moving out of rented quarters when it is completed. 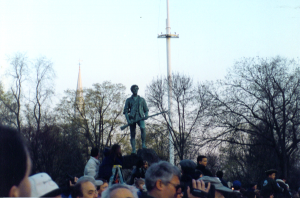 The land was purchased about six months ago but the red tape took a little while to make the transfer a reality.  Now that hurdle has been accomplished  we were able in this meeting to get down to concrete assignments and to plan a time frame for the raising of the building.

The Master had been busy between Communications handling permits and city of Dallas paperwork which is monumental.  He also had been busy completing 501(c)3 paperwork and I drew the assignment to help finish completes this application as well as proof read it and making any last revisions.

We will be building a steel building and we voted at our meeting to accept the architectural plans and materials purchase to frame the building.  Assignments were handed out to get bids on a general contractor, electrician, plumber etc.  Much of the building will be sweat equity.  We are going to be doing a lot of the inside work ourselves. So I can see many days of hard labor ahead of us. We have set a September ground breaking date and a January completion date.

But there is one thing I am sure of.  All the wages will be paid and none will go away dissatisfied. This story is far from over and you will be reading many serial follow ups to our progress. As this small Lodge takes upon itself a task that is all consuming and far reaching I ask for your prayers that this project will have a fruitful ending.

END_OF_DOCUMENT_TOKEN_TO_BE_REPLACED

In this installment of the Symbols and Symbolism of Freemasonry, we consider a vital emblem of Freemasonry, the compass or compasses. Albert G. Mackey, in his … END_OF_DOCUMENT_TOKEN_TO_BE_REPLACED

Raised to a Master Mason in 1908, at Harmony Lodge No. 17 in Washington, DC, Carl H. Claudy  served as the Master and eventually as Grand Master of Masons … END_OF_DOCUMENT_TOKEN_TO_BE_REPLACED

In this final installment of the Faith Hope and Charity series, we consider the symbolism of charity, or perhaps better called love. It is this attribute that … END_OF_DOCUMENT_TOKEN_TO_BE_REPLACED

In this installment of the Symbols and Symbolism of Freemasonry, we examine the text of Albert Mackey's Encyclopedia of Freemasonry on the symbolism of … END_OF_DOCUMENT_TOKEN_TO_BE_REPLACED