You are here: Home / Education / Books / The Symbolism of Freemasonry / VI – The Ancient Mysteries 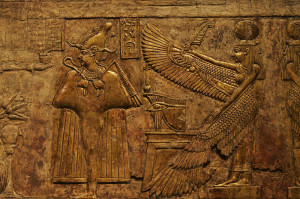 I now propose, for the purpose of illustrating these views, and of familiarizing the reader with the coincidences between Freemasonry and the ancient Mysteries, so that he may be better enabled to appreciate the mutual influences of each on the other as they are hereafter to be developed, to present a more detailed relation of one or more of these ancient systems of initiation.

As the first illustration, let us select the Mysteries of Osiris, as they were practiced in Egypt, the birthplace of all that is wonderful in the arts or sciences, or mysterious in the religion, of the ancient world.

It was on the Lake of Sais that the solemn ceremonies of the Osirian initiation were performed. “On this lake,” says Herodotus,

it is that the Egyptians represent by night his sufferings whose name I refrain from mentioning; and this representation they call their Mysteries. [17]

Osiris, the husband of Isis, was an ancient king of the Egyptians. Having been slain by Typhon, his body was cut into pieces[18] by his murderer, and the mangled remains cast upon the waters of the Nile, to be dispersed to the four winds of heaven. His wife, Isis, mourning for the death and the mutilation of her husband, for many days searched diligently with her companions for the portions of the body, and having at length found them, united them together, and bestowed upon them decent interment,–while Osiris, thus restored, became the chief deity of his subjects, and his worship was united with that of Isis, as the fecundating and fertilizing powers of nature. The candidate in these initiations was made to pass through a mimic repetition of the conflict and destruction of Osiris, and his eventual recovery; and the explanations made to him, after he had received the full share of light to which the painful and solemn ceremonies through which he had passed had entitled him, constituted the secret doctrine of which I have already spoken, as the object of all the Mysteries. Osiris,–a real and personal god to the people,–to be worshiped with fear and with trembling, and to be propitiated with sacrifices and burnt offerings, became to the initiate but a symbol of the “Great first cause, least understood,” while his death, and the wailing of Isis, with the recovery of the body, his translation to the rank of a celestial being, and the consequent rejoicing of his spouse, were but a tropical mode of teaching that after death comes life eternal, and that though the body be destroyed, the soul shall still live.

“Can we doubt,” says the Baron Sainte Croix, “that such ceremonies as those practiced in the Mysteries of Osiris had been originally instituted to impress more profoundly on the mind the dogma of future rewards and punishments?” [19]

“The sufferings and death of Osiris,” says Mr. Wilkinson,[20] “were the great Mystery of the Egyptian religion; and some traces of it are perceptible among other people of antiquity. His being the divine goodness and the abstract idea of ‘good,’ his manifestation upon earth (like an Indian god), his death and resurrection, and his office as judge of the dead in a future state, look like the early revelation of a future manifestation of the deity converted into a mythological fable.”

A similar legend and similar ceremonies, varied only as to time, and place, and unimportant details, were to be found in all the initiations of the ancient Mysteries. The dogma was the same,–future life,–and the method of inculcating it was the same. The coincidences between the design of these rites and that of Freemasonry, which must already begin to appear, will enable us to give its full value to the expression of Hutchinson, when he says that “the Master Mason represents a man under the Christian doctrine saved from the grave of iniquity and raised to the faith of salvation.” [21]

In Phoenicia similar Mysteries were celebrated in honor of Adonis, the favorite lover of Venus, who, having, while hunting, been slain by a wild boar on Mount Lebanon, was restored to life by Proserpine. The mythological story is familiar to every classical scholar. In the popular theology, Adonis was the son of Cinyras, king of Cyrus, whose untimely death was wept by Venus and her attendant nymphs: in the physical theology of the philosophers,[22] he was a symbol of the sun, alternately present to and absent from the earth; but in the initiation into the Mysteries of his worship, his resurrection and return from Hades were adopted as a type of the immortality of the soul. The ceremonies of initiation in the Adonia began with lamentation for his loss,–or, as the prophet Ezekiel expresses it, “Behold, there sat women weeping for Thammuz,”–for such was the name under which his worship was introduced among the Jews; and they ended with the most extravagant demonstrations of joy at the representation of his return to life,[23] while the hierophant exclaimed, in a congratulatory strain,

Trust, ye initiates; the god is safe, And from our grief salvation shall arise.

Before proceeding to an examination of those Mysteries which are the most closely connected with the masonic institution, it will be as well to take a brief view of their general organization.

The secret worship, or Mysteries, of the ancients were always divided into the lesser and the greater; the former being intended only to awaken curiosity, to test the capacity and disposition of the candidate, and by symbolical purifications to prepare him for his introduction into the greater Mysteries.

The candidate was at first called an aspirant, or seeker of the truth, and the initial ceremony which he underwent was a lustration or purification by water. In this condition he may be compared to the Entered Apprentice of the masonic rites, and it is here worth adverting to the fact (which will be hereafter more fully developed) that all the ceremonies in the first degree of masonry are symbolic of an internal purification.

In the lesser Mysteries[24] the candidate took an oath of secrecy, which was administered to him by the mystagogue, and then received a preparatory instruction,[25] which enabled him afterwards to understand the developments of the higher and subsequent division. He was now called a Mystes, or initiate, and may be compared to the Fellow Craft of Freemasonry.

In the greater Mysteries the whole knowledge of the divine truths, which was the object of initiation, was communicated. Here we find, among the various ceremonies which assimilated these rites to Freemasonry, the aphanism, which was the disappearance or death; the pastos, the couch, coffin, or grave; the euresis, or the discovery of the body; and the autopsy, or full sight of everything, that is, the complete communication of the secrets. The candidate was here called an epopt, or eye-witness, because nothing was now hidden from him; and hence he may be compared to the Master Mason, of whom Hutchinson says that:

he has discovered the knowledge of God and his salvation, and been redeemed from the death of sin and the sepulcher of pollution and unrighteousness.

END_OF_DOCUMENT_TOKEN_TO_BE_REPLACED

Raised to a Master Mason in 1908, at Harmony Lodge No. 17 in Washington, DC, Carl H. Claudy  served as the Master and eventually as Grand Master of Masons … END_OF_DOCUMENT_TOKEN_TO_BE_REPLACED

In this final installment of the Faith Hope and Charity series, we consider the symbolism of charity, or perhaps better called love. It is this attribute that … END_OF_DOCUMENT_TOKEN_TO_BE_REPLACED

In this installment of the Symbols and Symbolism of Freemasonry, we examine the text of Albert Mackey's Encyclopedia of Freemasonry on the symbolism of … END_OF_DOCUMENT_TOKEN_TO_BE_REPLACED

In this installment of the Symbols and Symbolism of Freemasonry, we consider a reading of Albert Mackey's text on the subject of Faith as it pertains to … END_OF_DOCUMENT_TOKEN_TO_BE_REPLACED