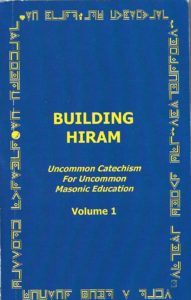 I recently completed digesting Dr. John Nagy’s book Building Hiram. It is another in a series of Catechism Primer formats that Nagy has published for increasing Light in Freemasons. This method of instruction follows what many Masons received as they went through the Degrees. Yet I must admit that since I last had that pleasure 27 years ago, I have not again come across this format until becoming acquainted with Coach Nagy’s work. At first it was difficult to adjust to this style of imparting information, but in Building Hiram it all seemed so natural and I have come to appreciate what the Catechism style has to offer. It makes learning follow a sequence where one building block is added to another and then another, yet at any time one may jump into the middle of the book, randomly picking any page, and jump right in without discomfort.

Building Hiram is for the Master Mason and Nagy says, “The Word before you is what I wish I had been given when I was Raised.”

Nagy goes on to say this for newly Raised Masons and I suppose even those who were Raised many moons ago:

“Should Masons take a step back and reflect on the actual picture painted before them, much more may be gleaned. In fact, further Masonic Benefit occurs only by considering the interconnections between the symbols, the overlap of themes and the rhythm of the patterns continually played out from beginning to end.”

In a paper written by Worshipful Brother Alphonse Cerza titled AND GIVE THEM PROPER INSTRUCTION Cerza says:

There is no question that the Masonic ritual is the foundation of the Craft. In it we find the message that Freemasonry has for the candidate, its philosophy, and its moral teachings. If one knows these lessons fully and complete- ly, he is indeed a wise man. Too many of us are concerned more with perfection of the words rather than securing a full understanding of the spirit and the meaning of the ritual.

Let us not make the mistake of believing that the ceremony of initiation makes a man a Mason. True, this ceremony is vital and necessary, but unless the lessons of the ceremony and the spirit of the ritual is understood it is nothing. For example, for hundreds of years in the ancient world there were a number of associations that we now call the Ancient Mysteries. These organizations had a number of things in common. One element stands out above all others: the belief that the ceremony of the Mystery purified the can- date. This basic belief more than any other factor brought these organizations to an end. Let us learn one lesson from this page of history: The ceremonies of the three degrees are of no value unless they are understood by the candidate and are grafted into everyday life. An informed and enlightened membership is a better and more successful one. This is not idle talk. Brother William H. Knutt, in 1952, at the Mid-West Conference on Masonic Education, gave a report in which it was clearly shown that when the great depression of the thirties came along, the jurisdictions in which the Craft had been offering educational programs lost the least number of members.

The Craft should be put to WORK. That there be perfection in the ritual, that members receive instruction in the ceremonies of the Craft, and that our degree work be retained is of vital importance. No fault can be found with the ritualistic work for it is the foundation of our Order. Fault should be found with the view that we stop our efforts with the conferring of the degrees. We are amiss in our duty to the Craft when we do not properly prepare our candidates and then abandon the newly-made Mason to his own devices. Lodges that devote their entire time to conferring degrees will soon find that quantity is not a substitute for quality. The quality of the membership is determined not only by the careful screening of applicants for the degrees but also in making the new member Mason in fact. This can be done by putting the new Mason to work.

And this is what Nagy has consistently done in all his books maybe with a bit of a modification. Instead of putting Masons to work Nagy puts them into thinking and realizing what it all means. He connects the dots so that a Mason can get an idea of the whole picture. He puts all the pieces of the puzzle together so the Mason can now see the big picture.

Nagy works a jigsaw puzzle, one piece goes here, one piece there, then another and in the end you have a picture that forms concepts and paths to betterment and a philosophy.

Nagy tells us, “ One of the sad results that discovered Light gave to me was a picture of Masonry that was filled with gaps. The vast majority of practicing Blue Lodge Masons I’ve encountered have no more Masonic Education than what they learned and did during Degree Work. They memorized and repeated back what had been memorized and repeated to them; they had no real fundamental understanding of the wonderful Light and guidance being offered to them.”

So Nagy sets out to weave a tale of the integration of Masonic symbols, Masonic tools, Masonic illustrations and Masonic concepts into a better understanding of not only what Masonry is all about but how to use Masonry.

He starts with the Ashlars and ends with The Master’s Wages. Along the way we learn in depth about the Stone Builder’s Tools, The Orders of Architecture, The Staircase, The Four Ruffians (yes I said 4), The Ancient Penalties, The 3-4-5 Triangle, The Sacred Triad, The Square and Compasses, The Temple and The Lost Word.

On the Ashlars he says, “There is nothing whatsoever that is added to any stone selected. Removal merely reveals the Beauty that is already there within the Stone.”

On the Stone Builder’s Tools he says, “The Working-Tools are specifically designed to make sure the Work we do as Masons has Integrity. No structure, however, grand, can stand long and well if its Integrity is compromised. Masonic Ritual is a constant reminder of this truth. In fact, it is the structural theme of Masonic Ritual. As a Builder, if you do not understand this, your ability to use what you know may eventually cause your structure to fail as well.” 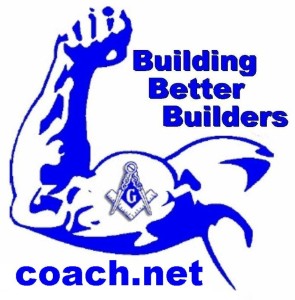 There is a lot of talk about Wisdom, Strength and Beauty; who represents these three virtues and what they can do for us personally.

If you read this book you will learn who the Fourth Ruffian is, that the Ancient Penalties were not enacted by others upon those who violate their Word but are self-inflicted and occur without fail, what three conditions are necessary to give the Master’s Word, what season is silently represented,  What the Sacred triad is, the meaning of ABN, why you descend the winding staircase, what three Tools, when one is missing, still have three, what Officer maintains the etiquette of the Lodge, who was Gomer, what is the Death Triplet, the significance of “As Above, So Below,” how the Word is made flesh, what the Last Wage is, and much, much more. But we don’t want to tell you everything about the book for then you might not read it. And that would be a shame since it is the way in which Nagy connects everything together, the reasoning used to make a whole, that leads to the light bulb coming on for you.

This is by far the best book I have run into for Masonic education of Master Masons both individually and in a group at the Lodge. Its crowning glory is the ability Nagy has to combine many individual teachings and concepts into one big one, to make the whole of Masonry, what constitutes its nobleness, righteousness and virtues into a philosophy. What Nagy does is explain Masonic philosophy by explaining and connecting all its component parts. This philosophy we call Masonry is a way of life. A Freemason cannot live this way of life unless he can understand it. And that’s the job that Nagy does. He articulates the philosophy of Masonry so that Masons are able to practice it because they understand it. For that reason alone this book must be part of your library and the library of your Lodge.

You can order the book here: http://www.coach.net/BuildingHiram.htm