You are here: Home / Royal Order of Jesters 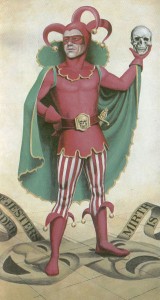 The Royal Order of Jesters is a sub organization of the Shrine which is invitation only and shrouded in substantial controversy.

From their former website (retrieved from the Wayback Archive in 2009 and 2011) they say of themselves:

The Jesterman’s Creed
Laugh and the glad world laughs with you,
Weep and the sad World will sigh!
Mirth is our Life’s true Elixir;
It show you’re a “Regular Guy!”
There’s nothing so banishes worry,
nor puts such a big crimp in sin;
Nor smooths out the wrinkles of trouble,
Like a jolly old Jesterman’s grin!
It rolls off the years from your shoulders,
You’ll forget that you’ve grown to be men!
Your youth turns once again to embrace you,
For you’ve grown to be schoolboys again!
So, if you’ve got grouches, don’t bring ’em,
It’s your laugh and your joke that we need;
For Mirth is the Doctor of Trouble,
And Laughter the Jesterman’s Creed.

The Royal Order of Jesters proudly believe and participate in Masonry.

Whereas most Masonic bodies are dedicated to charity, The Royal Order of Jesters is a fun “degree,” with absolutely no serious intent. The motto, “Mirth is King,” is sufficient to give voice to the purpose of the organization. The Royal Order of Jesters feel that there are times, after our hard work and dedication to family and mankind, when everyone should remember to laugh and appreciate the good work one has done.

The original meeting resulting in the formation was held on February 20, 1911, by Shriners on a pilgrimage to Aloha Temple, Hawaii, in the Captain’s office of the “S.S. Wilhelmina.” Noble A.M. Ellison of San Francisco, California, was responsible and the original cast included a Director and thirteen members. It was organized June 25th, 1917, at an informal meeting. Jesters are made from members of the Shrine in good standing.

Membership is by invitation only, not application.

END_OF_DOCUMENT_TOKEN_TO_BE_REPLACED

Raised to a Master Mason in 1908, at Harmony Lodge No. 17 in Washington, DC, Carl H. Claudy  served as the Master and eventually as Grand Master of Masons … END_OF_DOCUMENT_TOKEN_TO_BE_REPLACED

In this final installment of the Faith Hope and Charity series, we consider the symbolism of charity, or perhaps better called love. It is this attribute that … END_OF_DOCUMENT_TOKEN_TO_BE_REPLACED

In this installment of the Symbols and Symbolism of Freemasonry, we examine the text of Albert Mackey's Encyclopedia of Freemasonry on the symbolism of … END_OF_DOCUMENT_TOKEN_TO_BE_REPLACED

In this installment of the Symbols and Symbolism of Freemasonry, we consider a reading of Albert Mackey's text on the subject of Faith as it pertains to … END_OF_DOCUMENT_TOKEN_TO_BE_REPLACED