You are here: Home / Tim Bryce / My Talk on Citizenship 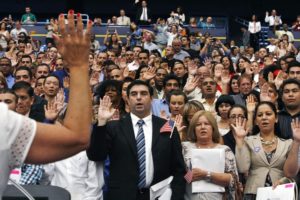 Some thoughts on how to promote citizenship in America.

In the Masonic world, we recently observed “Citizenship Month” here in Florida. Because of this, I was asked to give a talk on the subject for a local Lodge. Drawing upon a couple of my past columns, I assembled the following short talk:

My biggest concern regarding citizenship pertains to how we teach history and civics in this country. In some High Schools, “American History” runs from World War II to the present. This means students are not learning such things as the Declaration of Independence, the Constitution and Bill of Rights, the Civil War, the Louisiana Purchase, Lewis and Clark, Prohibition, the League of Nations, and much more. In other words, they only discuss the last 77 years, and not the events leading up to the founding of our country and the turmoils we had to endure. As an aside “World History” is now just World War I to the present. So much for the ancient Greeks, Egyptians, Romans, Marco Polo, the Magna Carta, Ferdinand Magellan, Alexander the Great, et al. I presume they had no bearing on our civilization.

Such ignorance of our history caused famed historian David McCullough to observe, “We are raising a generation that is historically illiterate and have a very sketchy, thin knowledge of the system on which our entire civilization is based on. It is regrettable and dangerous.”

We are also not educating youth properly in terms of “Civics”; understanding our responsibilities as citizens, such as voting, serving on a jury, how legislation is enacted, or what is included in the Constitution and Bill of Rights. No wonder young people do not grasp the significance of such things as the Electoral College, the structure of our government, or what their rights are.

Naivety and ignorance leads to apathy at the ballot box. In the 2016 elections, only 57.9% of the citizens voted (over 90 million didn’t vote at all). This is a pitiful figure when you compare it to other democracies like Australia, India, and the Scandinavian countries. Surprisingly, this was the highest voting percentage in the United States since 1968 (60.8%). The highest in recent history was in 1960 (63.1%) for the Kennedy/Nixon election. Even though Millennials (ages 18-35) are now the largest potential voting block, they continue to have the lowest voter turnout of any age group.

It is sad when legal immigrants understand the workings of the government and history more than native born Americans. Maybe all citizens should take the same oath naturalized citizens do. Since 1778, immigrants coming to this country have had to pass a test and take an oath swearing their allegiance to the United States. The current oath is as follows:

Not surprisingly, immigrants coming through this program tend to appreciate this country and are more loyal than native born Americans. Another cause for this could be because there is less emphasis on teaching American government and history in the schools than in years past. In other words, the importance of being a citizen has not been impressed upon our youth.

So, as a proposal, how about administering a modified version of the immigration oath to all native born Americans, perhaps on July 4th? All that is necessary is to simply modify the first sentence of the Immigration Oath; to wit:

“I hereby declare, on oath, that I will support and defend the Constitution and laws of the United States of America against all enemies, foreign and domestic;”

Parents could give it to their children, thereby turning it into a family tradition; civic organizations and local governments could administer it in public group settings, or perhaps some other venue. Maybe even the media could get involved and administer it over the airwaves or Internet. It should be administered in some solemn way with a right hand raised and the left hand placed on either a copy of the U.S. Constitution or perhaps a holy book such as a Bible, Torah, or Koran.

The oath is certainly not the same as the Pledge of Allegiance to the flag, this is instead a reaffirmation of our commitment to our country and would help promote citizenship and voting. Maybe this is something that should be given routinely as opposed to just one time; to remind people of their allegiance to this country. I cannot help but believe this simple gesture would have nothing but beneficial effects.

One last observation, during this past year, the talking heads on television recommended avoiding any talk of politics at the dinner table, particularly during Thanksgiving, Christmas and other holidays. I disagree. We do not do enough talking at the table in a calm and reasonable manner. Instead of leaving citizenship to the school educators and MTV, parents should spend more time discussing it around the dinner table, not in a dictatorial manner, but in a frank and open discussion. I believe our youth would better understand the virtue of the Electoral College if it came from their parents as opposed to an entertainer or athlete.

Maybe then, youth will appreciate the need for “Citizenship.”

END_OF_DOCUMENT_TOKEN_TO_BE_REPLACED

Raised to a Master Mason in 1908, at Harmony Lodge No. 17 in Washington, DC, Carl H. Claudy  served as the Master and eventually as Grand Master of Masons … END_OF_DOCUMENT_TOKEN_TO_BE_REPLACED

In this final installment of the Faith Hope and Charity series, we consider the symbolism of charity, or perhaps better called love. It is this attribute that … END_OF_DOCUMENT_TOKEN_TO_BE_REPLACED

In this installment of the Symbols and Symbolism of Freemasonry, we examine the text of Albert Mackey's Encyclopedia of Freemasonry on the symbolism of … END_OF_DOCUMENT_TOKEN_TO_BE_REPLACED

In this installment of the Symbols and Symbolism of Freemasonry, we consider a reading of Albert Mackey's text on the subject of Faith as it pertains to … END_OF_DOCUMENT_TOKEN_TO_BE_REPLACED