You are here: Home / What Is Freemasonry? / Family of Freemasonry / Mixed Gender Masonry

American Co-Masonry, an Masonic Obedience independent of all others, has not created a new Rite. That which distinguishes it from other existing Obedience’s is that, instead of admitting men only to its ranks, it admits women on an equal footing. It proclaims equal rights for both sexes and absolute liberty of conscience; and it demands, in order to secure to everyone unlimited freedom in the search for truth, the utmost tolerance from all members. It avoids political and religious discussions wherever these cannot be carried on with the requisite tolerance and moderation; it welcomes everyone who is free and of good report, whatever may be his convictions in matters of religion, philosophy or politics.

American Co-Masonry seeks to destroy ignorance under whatever form, and its program may be explained as follows:

From the first to the last, to whatever degree the aspirant may desire to be admitted, the first condition to be fulfilled is to have a reputation of unsullied honor and probity.

Members of the Order owe to each other help and support in all circumstances and conditions of life.

To think high, to speak truth, to do well, to be tolerant to others, to search after truth, to practice liberty under law, fraternal equality, justice and solidarity, are the duties which the Supreme Council of American Co-Masonry, prescribes for its members seeking to build to the Glory of the Great Architect of the Universe, to the perfection of Humanity, and to the service of the Head of All True Freemasons, the true Masonic Temple open to both men and women.

Co-Freemasonry is an international Masonic order that admits men and women on equal footing and is open to all earnest persons, of whatever race, religion, and ethnic or social group.

The basic difference is that Co-Freemasonry is available to men and women alike and does not discriminate on the basis of sex, nationality, religion, or ethnicity. Most Masonic groups admit only men; some admit only women; some admit both. But in addition, the Co-Masonic Order called “Le Droit Humain” is international, with its governing body in Paris and groups in some sixty countries of the world. Le Droit Humain also combines in one organization several varieties of Masonry: Craft Masonry (the basic sort), Scottish Rite Masonry, and York Rite Masonry.

Different from the Eastern Star which is an adjunct organization to exclusively masculine Masonry, intended primarily for the wives and daughters of Freemasons, but also including some men. It has its own ceremonies, but they are completely different from those of traditional Freemasonry. Co-Freemasonry follows the traditional Masonic rites and practices. Any masculine Mason who attends a Co-Masonic meeting will recognize it as essentially similar to his own practice.

The French expression “Le Droit Humain” is difficult to translate into English. It refers to Natural Law and Justice in human life, as distinct from laws that human beings make. It denotes the rights and responsibilities that every person is born with, those “unalienable Rights” cited in the American Declaration of Independence: “We hold these truths to be self-evident, that all Men are created equal, that they are endowed by their Creator with certain unalienable Rights, that among these are Life, Liberty, and the Pursuit of Happiness.” 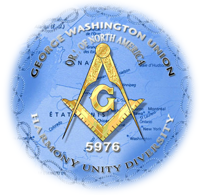 GWU Freemasonry is a form of Freemasonry for men and women of all nationalities, races, ethnicity, and creeds, who are not dogmatically bound to any specific religious belief or philosophical view. Its system of degrees helps members better fashion the “stone of self” within the one Temple of humanity, as it prescribes a symbolic, allegorical and ritualistic method of seeking to overcome ignorance, intolerance, and prejudice. Instead it strives to instill inits candidates with knowledge, wisdom, and service to the planet.

The motto of the George Washington Union of North America in a new millennium is:

under the distinct name

and the formation of the

SUPREME COUNCIL OF THE 33º

A newly founded “DELPHI” International Mixed Order, which is as an independent, self-governing and sovereign entity founded to express the vision of its founders in the matters of unhindered, effective and creative action in the intellectual, social and international field, and especially by the activation of its members so that the may pass the torch of the Freemasonic Ideal to all the world.

Some of its principals include the belief that Freemasonry is a Universal institution originating from itself, derived from Reason and its objective is the search for Truth, choosing freely religious and political beliefs that Philosophy and Science are an essential value that advances the evolution of modern men and women.

They accept the Absolute Freedom of Consciousness and the absolute Tolerance, respecting any creed or dogma, and they regard the Universal Freemasonic Tradition as the source from which we derive moral values and the route that leads to Self-understanding.