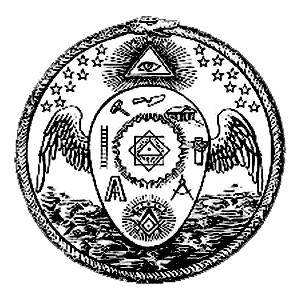 More than 200 years old, this Rite still engenders lively interest and enjoys important developments on an international level. Faithful to its founding principles, it affirms itself as a Rite that is traditional, symbolic and spiritualistic, and associated with the principles of tolerance and liberty.

Upon entering into the Ancient and Primitive Rite of Memphis Misraïm, one places a foot on the path of tradition, with respect for human values and tolerance. This Rite is characterized by an initiatic quest founded on:

Such is the spirit of traditional Masonry for which, in every act, there is both the visible and the invisible, the positive and the negative, a fleeting, perhaps even non-existent, present, already bearing the seeds of the future.

Freemasons of this rite are invited to think. An apprencticeship and a methodology are proposed that are founded on the knowledge of symbols, living tools that, in a constant dynamic, call into question all that has been acquired. Thus, according to the tradition of the Rite, the Mason “works the stone” again, always refining the perceptions and developing discernment. It addresses the interior of each in a rich, intimate experience that through resonance jostles the exterior while causing the perceptions and vision of the world to evolve, because the Mason has begun the greatest possible adventure, the conquest of the self.

More on the web: Rites of Memphis Misraim