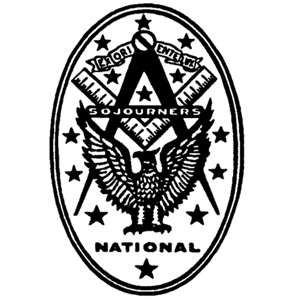 Sojourners are a fraternal organization meeting the needs of military Masons and advancing programs that promote love of country.

Although the term “sojourner” is common in Freemasonry, it takes on new meaning under the aegis of National Sojourners, Inc. This Order, founded to meet the needs of the Military Mason in war and peace, has as one of its precepts the words of George Washington, who once said:

When one assumes the soldier, he does not lay aside the citizen.

The Order traces its origin to the time when the North Dakota Regiment departed the Philippines taking with it the Field Lodge Dispensation, which had filled the needs of Masons while they were there. In its place a club of Masonic Sojourners was formed. In 1901 sixteen of these Sojourners, representing 13 Grand jurisdictions, demitted from their home Lodges and were granted a Lodge Charter by the Grand Lodge of California. Of course, by instituting a formal Blue Lodge, they negated their purpose for being and, therefore, ceased to exist. In 1913, Surgeon Capt. Harry Eugene Stafford, 33, Chartering Master of the Manila Lodge, which replaced the Sojourners Club, became the first Grand Master of the new Grand Lodge of the Philippines.

One the web at Sojourners.