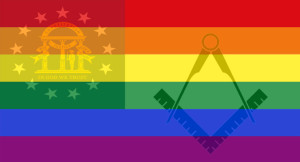 Here we go again in Georgia. Remember Victor Marshall who the Grand Lodge of Georgia tried to expel for being a Non-White? If not refresh your memory with the Freemason Information article My Brother’s Keeper –  Open Racism In Georgia Freemasonry.

Now it’s open war on homosexuals. Where will it all end? Do you think that Georgia can mimic Florida and ban all Pagan religions also?

Chris Hodapp on his Masonic Blog Freemasons For Dummies reports:

Last week in Georgia, the Grand Master, Douglas McDonald, issued an edict with the endeavor to change their adultery provision to additionally read, “Homosexual activity with anyone subjects the offender to discipline.”

I’m afraid there will be more of this. Brethren should consider that they have all probably been sitting in lodge with homosexuals since the day they became an EA. I strongly encourage Masons to check their state’s code and take steps to remove these provisions. I’m no gay activist, but we live in different times now, and the Supreme Court has spoken on the subject. Like it or not, such rules may subject us to lawsuits, and I humbly beseech Grand Masters not to act rashly because homosexuality conflicts with their own personal views of morality. We have had thousands of gay members since our beginnings, almost entirely without incident or without bringing disgrace upon the Craft. What someone does in the privacy of their own bedrooms is none of our business, as long as they don’t bring their politics into the lodge room.

Hodapp also reports on the Grand Lodge of Tennessee attempting to expel a Gay member.

Author Brother Michael Karpovage has this to say:

What an utterly embarrassing day it is for Freemasonry in the state of Georgia. An angry day. We are a non-religious educational institution based on Brotherly Love for our fellow man. Tolerance is a key tenet of the organization. A man’s character is all that matters. Not his race, his personal religion, his wealth or social status. And certainly NOT his sexuality.

Yet, our deeply religious Grand Master just shoved down our throats (pun intended) an edict that bans a homosexual from becoming a Mason on the basis that it’s moral sin under God. His version of God. There was no debate, no unanimous decision. There wasn’t a statewide call for this action by the brethren. It was issued like an executive order in the very last month of his term. He opened Pandora’s Box and I certainly gave him an earful of which I’ll probably be reprimanded for or worse. But I will not sit idly by without raising my voice.

This is what scares me about these Ralph Reed-type religious far-right wingers in our country. I believe in separation of church and state. I joined this institution specifically because religion and politics (two of the most divisive subjects of mankind) are strictly prohibited from being discussed within a lodge. And with one man’s actions, now all GA Masons will be painted as backward ass bigots.

So it would appear that Georgia Masonry has taken a stand on the subject.

END_OF_DOCUMENT_TOKEN_TO_BE_REPLACED

Raised to a Master Mason in 1908, at Harmony Lodge No. 17 in Washington, DC, Carl H. Claudy  served as the Master and eventually as Grand Master of Masons … END_OF_DOCUMENT_TOKEN_TO_BE_REPLACED

In this final installment of the Faith Hope and Charity series, we consider the symbolism of charity, or perhaps better called love. It is this attribute that … END_OF_DOCUMENT_TOKEN_TO_BE_REPLACED

In this installment of the Symbols and Symbolism of Freemasonry, we examine the text of Albert Mackey's Encyclopedia of Freemasonry on the symbolism of … END_OF_DOCUMENT_TOKEN_TO_BE_REPLACED

In this installment of the Symbols and Symbolism of Freemasonry, we consider a reading of Albert Mackey's text on the subject of Faith as it pertains to … END_OF_DOCUMENT_TOKEN_TO_BE_REPLACED