As an example of the depth of which the Number Philosophy penetrates into the very heart of -Nature, when geometrically considered, the study of a mere snow crystal affords us a striking object lesson.

The State of Vermont possesses a specialist in the micro-photography of snowflakes. He is an enthusiast, who has collected many hundreds of photographs of newly fallen snowflakes by photographing them as they descend upon a sheet of black paper, in an open-air studio, through a purposely left aperture in the roof.

His pictures make manifest that the snowflake is, in a sense, during its ephemeral career, a living organism, in that it, while seemingly possessed of myriad crystalline forms, follows a definite law of development, from the most primitive geometrical figure, a perfect equilateral triangle, to a gorgeous foliate crystal of many points or “buds.” 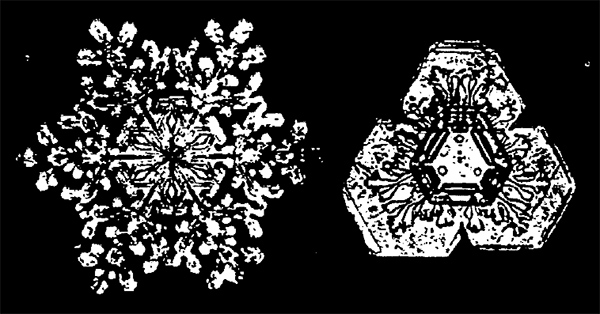 The fundamental circumstances seem about as follows: When the chemical atoms of oxygen and hydrogen encounter and combine as moisture in the presence of a sufficiently low temperature to congeal as they do so, an ice crystal is formed, the geometrical character of which is governed by the ultimate globular structure of its molecules. Now, it is demonstrable that equilateral triangles and hexagons are the only perfect geometrical figures that may be used to divide masses of spheres or circles, in closest possible contact, into symmetrical groups. Hence the electricity of the atmosphere, which at once finds lodgment upon all particles of moisture in suspension (whence the phenomena of lightning and thunder also), becomes the life force of the newly formed drop, and manifests its dynamic power equally in every direction; but always in straight lines, divergent from other straight lines at angles of 60 degrees.

The result is a fixed visualization of the electric spark which for the moment has clothed itself in the aqueous fluid, obedient only to the molecular constitution of the latter. The elaborateness of the resultant design is evidently dependent on the strength of the electric charge and the volume of water acted upon ; the innumerable photographs taken through a powerful microscope reveal no variations in the law of progress.

The miracle of the thing lies in the fact that in the center of each of these beautiful six-pointed ice flowers is revealed the hexagonal” star that’ the “ancient-Hindu occultists united in proclaiming the symbol of fire (or spirit), the up-pointed triangle, and water (matter) the down-pointing triangle . In India this figure is the united seal of Vishnu and Shiva, or “Life and Death,” intimately associated in metaphysics with “Spirit” and “Matter.” It is also one of the principal emblems of Scottish Rite Masonry and of the Theosophical Society.

Among our Hebrew brethren this sacred symbol is called the Mogun Dovid, or “Shield of David,” and also the “Seal of Solomon,” It is embroidered in gold on the veil that conceals the sacred scroll of the Law in the Tabernacle . It is stamped in gold on the cover of the Jewish Bible, surmounts the spires of synagogues, and is a universal emblem throughout the Mohammedan world.

The larger flake selected for illustration (both are from un-retouched negatives) exhibits 13 “buds” to each of its six points, resulting in the ancient Hebrew cabalistic number 78, which stood for H1H HVVH VIHIH (“He that Was-He that Is-He who is to come” or “Ever shall be”).

The other figure is a less developed specimen, which displays a single perfect down-pointing equilateral triangle, the geometrical value of which is like that of all triangles, the sum of the angles of which is 180 degrees, or a semicircle. This in Hebrew cabalism was S (60) L (30) M (40) N (50), while in the center are displayed three little circles like the letter 0. The symbol therefore reads “S o L o M o N.”

This is by no means the end of the series of beautiful cabalistic mysteries attached to these exquisite natural figures; but it must indeed convey an inspiring thought to our Jewish brother to reflect that every flake of pure, white, driven snow that has fallen from heaven to earth during the eons of time that separate us from creation has carried as its divine message this beautiful emblem of his race and faith, so much of which is indissolubly riven to the Masonic craft.

Yet there are still to be found many brethren who will tell us glibly, “There are no mysteries in Masonry!” 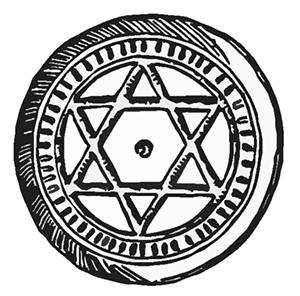