You are here: Home / Education / Books / The Symbolism of Freemasonry / IV – The Primitive Freemasonry of Antiquity 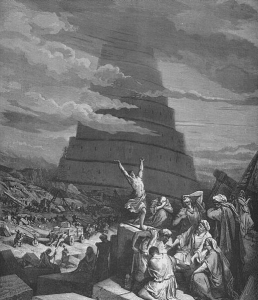 The next important historical epoch which demands our attention is that connected with what, in sacred history, is known as the dispersion at Babel. The brightness of truth, as it had been communicated by Noah, became covered, as it were, with a cloud. The dogmas of the unity of God and the immortality of the soul were lost sight of, and the first deviation from the true worship occurred in the establishment of Sabianism, or the worship of the sun, moon, and stars, among some peoples, and the deification of men among others. Of these two deviations, Sabianism, or sun-worship, was both the earlier and the more generally diffused.[5] “It seems,” says the learned Owen, “to have had its rise from some broken traditions conveyed by the patriarchs touching the dominion of the sun by day and of the moon by night.” The mode in which this old system has been modified and spiritually symbolized by Freemasonry will be the subject of future consideration.

But Sabianism, while it was the most ancient of the religious corruptions, was, I have said, also the most generally diffused; and hence, even among nations which afterwards adopted the polytheistic creed of deified men and factitious gods, this ancient sun-worship is seen to be continually exerting its influences. Thus, among the Greeks, the most refined people that cultivated hero-worship, Hercules was the sun, and the mythological fable of his destroying with his arrows the many-headed hydra of the Lernaean marshes was but an allegory to denote the dissipation of paludal malaria by the purifying rays of the orb of day. Among the Egyptians, too, the chief deity, Osiris, was but another name for the sun, while his arch-enemy and destroyer, Typhon, was the typification of night, or darkness. And lastly, among the Hindus, the three manifestations of their supreme deity, Brahma, Siva, and Vishnu, were symbols of the rising, meridian, and setting sun.

This early and very general prevalence of the sentiment of sun-worship is worthy of especial attention on account of the influence that it exercised over the spurious Freemasonry of antiquity, of which I am soon to speak, and which is still felt, although modified and Christianized in our modern system. Many, indeed nearly all, of the Masonic symbols of the present day can only be thoroughly comprehended and properly appreciated by this reference to sun-worship.

This divine truth, then, of the existence of one Supreme God, the Grand Architect of the Universe, symbolized in Freemasonry as the TRUE WORD, was lost to the Sabians and to the polytheists who arose after the dispersion at Babel, and with it also disappeared the doctrine of a future life; and hence, in one portion of the Masonic ritual, in allusion to this historic fact, we speak of “the lofty tower of Babel, where language was confounded and Masonry lost.”

There were, however, some of the builders on the plain of Shinar who preserved these great religious and Masonic doctrines of the unity of God and the immortality of the soul in their pristine purity. These were the patriarchs, in whose venerable line they continued to be taught. Hence, years after the dispersion of the nations at Babel, the world presented two great religious sects, passing onward down the stream of time, side by side, yet as diverse from each other as light from darkness, and truth from falsehood.

One of these lines of religious thought and sentiment was the idolatrous and pagan world. With it all Masonic doctrine, at least in its purity, was extinct, although there mingled with it, and at times to some extent influenced it, an offshoot from the other line, to which attention will be soon directed.

The second of these lines consisted, as has already been said, of the patriarchs and priests, who preserved in all their purity the two great Masonic doctrines of the unity of God and the immortality of the soul.

This line embraced, then, what, in the language of recent Masonic writers, has been designated as the Primitive Freemasonry of Antiquity.

Now, it is by no means intended to advance any such gratuitous and untenable theory as that proposed by some imaginative writers, that the Freemasonry of the patriarchs was in its organization, its ritual, or its symbolism, like the system which now exists. We know not indeed, that it had a ritual, or even a symbolism. I am inclined to think that it was made up of abstract propositions, derived from antediluvian traditions. Dr. Oliver thinks it probable that there were a few symbols among these Primitive and Pure Freemasons, and he enumerates among them the serpent, the triangle, and the point within a circle; but I can find no authority for the supposition, nor do I think it fair to claim for the order more than it is fairly entitled to, nor more than it can be fairly proved to possess. When Anderson calls Moses a Grand Master, Joshua his Deputy, and Aholiab and Bezaleel Grand Wardens, the expression is to be looked upon simply as a façon de parler, a mode of speech entirely figurative in its character, and by no means intended to convey the idea which is entertained in respect to officers of that character in the present system. It would, undoubtedly, however, have been better that such language should not have been used.

All that can be claimed for the system of Primitive Freemasonry, as practiced by the patriarchs, is, that it embraced and taught the two great dogmas of Freemasonry, namely, the unity of God, and the immortality of the soul. It may be, and indeed it is highly probable, that there was a secret doctrine, and that this doctrine was not indiscriminately communicated. We know that Moses, who was necessarily the recipient of the knowledge of his predecessors, did not publicly teach the doctrine of the immortality of the soul. But there was among the Jews an oral or secret law which was never committed to writing until after the captivity; and this law, I suppose, may have contained the recognition of those dogmas of the Primitive Freemasonry.

Briefly, then, this system of Primitive Freemasonry,–without ritual or symbolism, that has come down to us, at least,–consisting solely of traditional legends, teaching only the two great truths already alluded to, and being wholly speculative in its character, without the slightest infusion of an operative element, was regularly transmitted through the Jewish line of patriarchs, priests, and kings, without alteration, increase, or diminution, to the time of Solomon, and the building of the temple at Jerusalem.

Leaving it, then, to pursue this even course of descent, let us refer once more to that other line of religious history, the one passing through the idolatrous and polytheistic nations of antiquity, and trace from it the regular rise and progress of another division of the Masonic institution, which, by way of distinction, has been called the Spurious Freemasonry of Antiquity.

Previous – III – The Noachidae
Next – V – The Spurious Freemasonry of Antiquity

END_OF_DOCUMENT_TOKEN_TO_BE_REPLACED

Raised to a Master Mason in 1908, at Harmony Lodge No. 17 in Washington, DC, Carl H. Claudy  served as the Master and eventually as Grand Master of Masons … END_OF_DOCUMENT_TOKEN_TO_BE_REPLACED

In this final installment of the Faith Hope and Charity series, we consider the symbolism of charity, or perhaps better called love. It is this attribute that … END_OF_DOCUMENT_TOKEN_TO_BE_REPLACED

In this installment of the Symbols and Symbolism of Freemasonry, we examine the text of Albert Mackey's Encyclopedia of Freemasonry on the symbolism of … END_OF_DOCUMENT_TOKEN_TO_BE_REPLACED

In this installment of the Symbols and Symbolism of Freemasonry, we consider a reading of Albert Mackey's text on the subject of Faith as it pertains to … END_OF_DOCUMENT_TOKEN_TO_BE_REPLACED