Defined as knowledge intended for, or understood by, only a few, Masonic Esoterica is even perceived as meant for even fewer. It is an often-debatable vein of Freemasonry that man traditionalists argue as fuel to the already mythic origins of the fraternity. Even worse, that in many cases Masonic Esoterica is a later addition added to flavor its origin. All said, Masonic Esoterica exists, whether mystical or not, some masons as some time felt that these things were connected and were relevant to one another.

This section strives to explore these aspects of Esoterica and illuminate some of its function to the mystery schools. 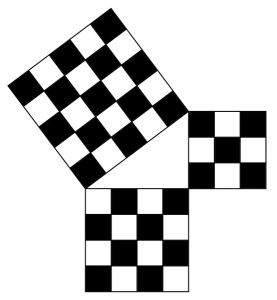 The 47th Proposition of Euclid

The 47th Problem of Euclid

There are so many symbols, words and phrases in Freemasonry used both as part of its rituals as well as part of its vocabulary, that studying and trying to understand the “meanings” them is a very worthwhile and a rewarding journey. One such prominent symbol and phrase, is the 47th problem of Euclid, which is one of the main symbols introduced in the Third Degree.

We are told that the Ashlars lie open in the lodge for the brethren to moralize on. Did you ever see a brother contemplating the Ashlars and trying to derive some moral benefit from them? For the most part they are quickly referred to and just as quickly forgotten. The Ashlar is the freestone as it comes from the quarry.

The Qur’an in the Craft Degrees

Over the years, several times the question has arisen about handling the Qur’an for use in a Lodge, and which verses to use for the conferral of degrees upon Muslim candidates and Brethren. In fact, the very first time that this writer ever browsed on-line, he happened upon the Freemasonry.org Welcome Wall, and found posted there the entry of an Australian Brother who had been the last one to post to the Wall before I opened the web site.

The Holy Saints John, duality in the construct of one

The Saint’s, John the Baptist and John the Evangelist, appear to Freemasons in several places in our catechisms. Their proximity and use in our rituals have been questioned for many years as to their use and placement. Looked at together, saint John the Baptist and St. John the Evangelist serve to represent the balance in Masonry between zeal for the fraternity and learned equilibrium. The Saints John, stand in perfect parallel harmony representing that balance.

December 27th is Saint John the Evangelist day, which is the 2nd feast day in the year to celebrate the Holy Saints John. The placement of the holiday also marks the winter solstice, which is directly opposite Saint John the Baptist’s day at the summer solstice in June making a notable completion in the cycle of the solar year. The actual dates are slightly off, but you get the symbolism.

Archaeologists have discovered many old cities, built on the ruins of still older cities, which in turn were erected upon the remains of cities still older. These several cities were built, existed for a time, were destroyed and forgotten and new cities built above. The artifacts found at the top are totally different from those found at the bottom of the complete excavations, as in natural, since the several cities may have been thousands of years in building, life, destruction and rebuilding….

The wages which our ancient brethren received for their labors in the building of King Solomon’s Temple are paid no more. In the lodge we use them only as symbols, save in the dedication, constitution and consecration of a new lodge and in the laying of cornerstones, when once again the fruit of the land, the brew of the grape, and the essence of the olive are poured to launch a new unit of brotherhood into the fellowship of lodges; to begin a new structure dedicated to public use.

Masonic Lodge is a symbol of the world as it was thought to be in the olden times. Our ancient Brethren had a profound insight when they saw that the world is a Temple, over-hung by a starry canopy by night, lighted by the journeying sun by day, wherein man goes forth to his labor on a checker-board of lights and shadows, joys and sorrows, seeking to reproduce on earth the law and order of heaven. The visible world was but a picture or reflection of the invisible, and at its center stood the ALTAR of sacrifices, obligation, and adoration.

The Holy Bible lies open upon the Altar of Masonry, and upon the bible lie the Square and Compasses. they are the three Great Lights of the Lodge, at once its Divine warrant and its chief working tools. They are symbols of Revelation, Righteousness, and Redemption, teaching us that by walking in the light of Truth and obeying the law of Right, the Divine in man wins victory over the earthly. How to live is the one important matter, and he will seek far without finding a wiser way than that shown us by the Great Lights of the Lodge.

The ROSICRUCIANS: Past and Present, at Home and Abroad

It is well at certain times to consider our status as Rosicrucians, and to remind ourselves of the origin of the Society to which we belong, to notice how far we moderns have strayed from the original paths laid down by our Founder, C.R., and to take a note of the kindred Societies of Rosicrucians which are now in being, so far as we know of them.

In the Spirit of John the Baptist

As a candidate becomes initiated into the First Degree, he becomes familiar with the Lodge of Masons for the first time. In doing so, he also becomes familiar with “the Holy Saint John” – or, rather, two of them: Saint John the Baptist and Saint John the Evangelist. While consideration of both of them is certainly rewarding, introduction of both is beyond the scope of this article: we will limit ourselves here to an introduction of John the Baptist, and leave John the Evangelist for another article.