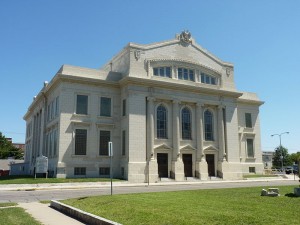 This is came off of a Press Release, and deserves to be shared.

If you’ve been completely disconnected form the weather tragedy in Joplin Missouri recently, the latest reporting has the death toll near to 140 people killed in the Missouri storms. Needless to say, much of the community was utterly destroyed.

Spared in the tragedy was the Joplin Scottish Rite, and even though members suffered their own loss, the Rite opened its doors and began to immediately help those who needed assistance.

Saying well done is an understatement of their work.  The only thing that comes to mind to ask is how can we help?

Washington, DC – June 1, 2011 – Freemasons in Joplin, MO began serving meals the day after the tornado hit to the First Responders and victims, even though some of them had lost homes as well.

PRLog (Press Release) – Jun 01, 2011 – The Joplin Scottish Rite Cathedral located at 505 S. Byers Ave. in downtown Joplin, MO was spared damage from the recent tornado. Even though some of the Scottish Rite Freemasons suffered damaged or destroyed property by the tornadoes, many of these same men showed up at the building to see how they could help the people of Joplin who were also suffering from the aftermath of the disaster.

According to Richard Lowery the Executive Secretary at the Valley of Joplin, members just showed up and decided to put the large professional kitchen to good use. Reaching out to the First Responders they began the process of cooking breakfast, lunch and dinner.

According to Lowery, the first day was somewhat disorganized, as they figured out how to get things done. The Scottish Rite publicized that hot meals were available at the Cathedral through Facebook, web sites, on radio and television. They contacted emergency personnel and volunteers and distributed a small flyer. In addition to First Responders, the masons began distributing food directly to families in the affected areas. The Masons started out on the first day delivering about 300-400 meals. This number grew quickly to 2,000 meals a day and reached a peak on Memorial Day of about 2,500 meals. Lowery said “Many grateful hearts accepted our gifts”

The organization will also be assembling teams to go to areas for removal of debris, to cut up fallen timber and to clean-up properties.

Lowery finds working the phones for help and donations somewhat frustrating as he wants to dig in and help in the field. Immediately after the storm, along with his sons, he went to volunteer at St. Johns Hospital where he had worked for 25 years. They tried to help a victim trapped in the rubble. “We weren’t successful… It’s so damned hard…”

St. Johns Hospital was inoperable because of the tornadoes damage to the building. Richard is doing great work, making sure those people in the field, as well as the victims, are being fed.Offers of donations and help have been coming in from all over the country.

Richard said, “We believe the tornado recovery is moving into a new phase and clean-up will become much more important, especially on the weekends. We’ll close food preparation today (June 1st), re-open for the weekend and see if there is a need. The City has begun major debris removal today. Our tent with household supplies will remain open, but we plan to begin taking our supplies to places where it may be needed. I wish I could put into words the devastation I have seen after the tornado passed through our city. And I wish I could put into words the gratitude we have seen from just a simple hot meal delivered into the affected areas.”