You are here: Home / Featured / Lux in Tenebris-Maundy Thursday in Freemasonry

This seems fitting giving the present state of things in Freemasonry. Lux in Tenebris – From Darkness Comes Light.

Maundy Thursday, or also known as Covenant Thursday or simply Holy Thursday, is the annual Christian holy day that occurs on the last Thursday before Easter. It is a remembrance day for the last supper that Jesus and his twelve apostles, as was described in the canonical gospels, it is also for remembering The Maundy, which was the washing of the feet, particularly the Maundy that Jesus performed.

The moment when the Word was recovered; when the Cubical Stone was changed to the Mystic Rose; when the Blazing Sun reappeared in its entire splendor; the Columns of the Temple were re-established; and the Working Tools of Masonry restored; when True Light dispelled the Darkness and the New Love began to rule upon the earth.

On this day, Christians all around the world take time out of their day to reflect on the life of Jesus Christ, leading up the point of the last supper where he sat down with his apostles and shared food and wine, proclaiming that it was his body and blood.

In Western Churches, Maundy Thursday is when the Chrism mass is celebrated in every diocese, usually held in each diocese’s cathedral. This mass involves a bishop blessing chrism oils, oil of catechumens and oil of the sick. The Oil of chrism and catechumens will be saved until Easter Saturday where they will be used to bless the attendees of the mass.

There is an ancient tradition that on Maundy Sunday, you should visit 7 different churches, this is called the seven churches visitation, and this practice originated in Rome and is now practiced in many countries around the world.

The term Maundy is said to be a corruption of the Latin word mandatum – meaning “command.”

In a Masonic parlance, the Maundy Thursday is envisioned as a ceremony to commemorate the Extinguishing of the Symbolic Light, more specifically the crucifixion of the Christ in the gospel telling. On the immediate Sunday, there is a follow-up observance aptly called the Relighting of the Symbolic Light which marks the resurrection. The key point of this observance is to remember those brethren who have passed on in the preceding year. Where once these events were mandatory attendance events for Knight Rose Croix, in most locations they serve as remembrance events open to all. 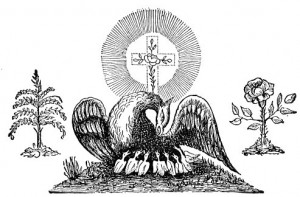 While an observance event, the Maundy gathering in some respect serve to supplement the Rose Croix Chapter of the Scottish Rite in the 17th (Knight of the East and West) and 18th (Knight Rose Croix) degrees, both of which attempt to invest candidates with an understanding of Religion, Philosophy, Ethics, and History. While seemingly a religious (Christian) observance, it’s been written that the observance seeks to “to commemorate the death of our most wise and perfect Master – not as inspired or divine, but as at least the greatest of humanity.” In one description of the event, Arturo De Hoyos says,

The Ceremony of Remembrance and Renewal, including the Mystic Banquet, is not a religious observance.  It is neither the Feast of Passover nor a Sacrament of Holy Communion, although it commemorates the spirit of both days. Annually, the observance is held near the vernal equinox.

From the Builder Magazine, April 1924, the observance is thus described, 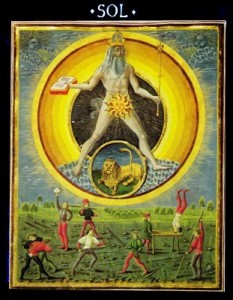 The ceremonies of Maundy Thursday made obligatory on each Rose Croix Chapter of the Scottish Rite, is a festival almost as old as the world, for it has been observed in some form or other from time immemorial. It began with early man’s naive wonder at the coming of spring, an event to him of the very greatest importance since it represented the return of the sun god from the death of winter to the resurrection of the vernal equinox. “The years at the spring,” that was his feeling, and this feeling took a thousand forms of expression, some of them magical, some religious, some of them a joyous human merry-making. Whatever the form the kernel of feeling remained the same; the god of light, warmth, and life, whatever may have been his name Mithra, Attis, Cama, Osiris, Ormuzd, Dionysus had been dead through the winter time, and now he had come back to life again, and would bestow life on his people, therefore there were solemn rejoicings.

Of the ceremony itself, it says,

The Symbolic Lights are Re-lighted; it is a time of rebirth, rehabilitation, regeneration and renewal of life and energy. Death and darkness have departed and the earth sings its joy of Love and of Living. What before was desolation of spirit and of thought, has the crucible of Light and the revivification of those for whom life had lost its meaning.

Just as the dark ages in Europe were followed by the Renaissance of learning, so had the new light of Easter come, bringing with it the new life of Love and understanding.

The new Commandment has been fulfilled.

This is a time, then, for each of us to search our Souls and see if we truly and devotedly are living the Life of Love —Not just in mere outward similitude. But in our innermost, personal, private lives. Are we — in business, at home, in our pastimes — living the life of the New Commandment? If we weigh ourselves in its light and find ourselves wanting. Then it is time for us to do something sincerely and devotedly about it.

Let us at the Symbolic Relighting of the Lights, dedicate ourselves to duty, renew our vows, so often repeated in our Rite, and lead the Life of Love, one to another, that our light will shine among men in the world, that we may be known truly as men and as Masons who mean eternal truths learned in our Rituals and who, by our personal acts and conduct, portray those meanings to their ultimate fulfillment.

END_OF_DOCUMENT_TOKEN_TO_BE_REPLACED

Raised to a Master Mason in 1908, at Harmony Lodge No. 17 in Washington, DC, Carl H. Claudy  served as the Master and eventually as Grand Master of Masons … END_OF_DOCUMENT_TOKEN_TO_BE_REPLACED

In this final installment of the Faith Hope and Charity series, we consider the symbolism of charity, or perhaps better called love. It is this attribute that … END_OF_DOCUMENT_TOKEN_TO_BE_REPLACED

In this installment of the Symbols and Symbolism of Freemasonry, we examine the text of Albert Mackey's Encyclopedia of Freemasonry on the symbolism of … END_OF_DOCUMENT_TOKEN_TO_BE_REPLACED

In this installment of the Symbols and Symbolism of Freemasonry, we consider a reading of Albert Mackey's text on the subject of Faith as it pertains to … END_OF_DOCUMENT_TOKEN_TO_BE_REPLACED