You are here: Home / Featured / Mozart and The Magic Flute 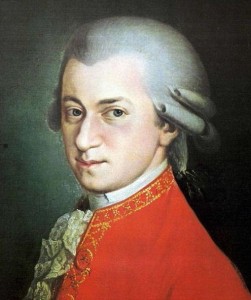 The topic of Masonic Music came up recently in a sub reddit forum with the posting of the Grand Leveler video from up and coming artist Apathy. The gist of the discussion came down to what was art, and more particularly, what elevated Masonry in its art.

In one of the exchanges, Mozart’s Magic Flute was used as an exemplary example of the ideas of Masonry elevated in an artistic endeavor.

The argument aside, it made me wonder “How many of today’s Masons have actively sought out the Masonic connections in Mozart’s Great Work, let alone sat down to watch the three hour epic?”

So, not that a Google search wouldn’t facilitate this, here’s your chance.

And, if you need some enticements, I’ve brought in some commentary from just a couple of sources on the opera to give it some context and flavor to induce interest. Interestingly, look for the Vernunft, Weisheit, and Natur over the doors.

And, if the German Aria throws you, here is a German to English translation on what they’re saying.

Both Mozart and the opera’s librettist, Emanuel Schikaneder, were devoted Freemasons, at a time when the Masonic order was frowned upon by the authorities and mistrusted by the public. Its meetings were mysterious to outsiders and the order was believed to be connected to the principles of the Enlightenment, so established political leaders were a little nervous about it. The emperor of Austria even restricted the number of Masonic lodges allowed to operate in the country.

So, while Mozart’s drama fell into the general category of “magic opera” — works based on folk tales, with plenty of stunts, scene changes and spectacular stage effects — it was also a political statement in disguise. Mozart and Schikaneder crammed all kinds of veiled Masonic symbolism into The Magic Flute, and people have been trying to figure the whole thing out for more than 200 years.

And, the Higher Revelations blog broke down the artist and the opera well in its post from 2012, Mozart and the Freemasons: A Study of ‘The Magic Flute.’ Their conclusion sums up the notion of this Great Work saying,

Given the story, the numerous symbols and Masonic references, and the musical treatments Mozart employs, it is hard to dispute that Freemasonry played a huge influence over the creation of The Magic Flute. However, it is important not to view the work simply as a Masonic treatise. Much more than that, Freemasonry is used as a foundation stone from which the truly great elements of the opera spring.

And, lastly, the Wikipedia page does some justice in attempting to quantify Mozart’s Masonic connections.

So, rather than try and reinvent the wheel and re-explain something so well researched and commented upon already, I suggest rather sitting back and enjoying the Magic Flute in its totality, from this UGA Opera Theater production of The Magic Flute.

END_OF_DOCUMENT_TOKEN_TO_BE_REPLACED

Raised to a Master Mason in 1908, at Harmony Lodge No. 17 in Washington, DC, Carl H. Claudy  served as the Master and eventually as Grand Master of Masons … END_OF_DOCUMENT_TOKEN_TO_BE_REPLACED

In this final installment of the Faith Hope and Charity series, we consider the symbolism of charity, or perhaps better called love. It is this attribute that … END_OF_DOCUMENT_TOKEN_TO_BE_REPLACED

In this installment of the Symbols and Symbolism of Freemasonry, we examine the text of Albert Mackey's Encyclopedia of Freemasonry on the symbolism of … END_OF_DOCUMENT_TOKEN_TO_BE_REPLACED

In this installment of the Symbols and Symbolism of Freemasonry, we consider a reading of Albert Mackey's text on the subject of Faith as it pertains to … END_OF_DOCUMENT_TOKEN_TO_BE_REPLACED