Ron Paul, it seems, is not a Freemason.

At least according to the note purported to be written by Paul’s hand, as published on the Ron Paul fan site RonPaul.com. 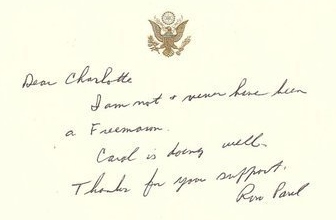 It’s been variously said that because his father and mother had Masonic ties, that he was by consequence, a fellow traveler.  But, take it as you may.  According to Paul himself, he’s not a member of the lodge.

In a piece on the blog Aftermath, it cites a much older post in which a former scheduler by the name of Liberty Oak confirms the same saying that Paul’s father was a mason, that his wife is a member of Eastern Star, and his two daughters were both Rainbow Girls.  Other than his familial links, there doesn’t seem to be any other connection to the fraternity.