You are here: Home / Featured / The Hermetic Foundations of the American Republic 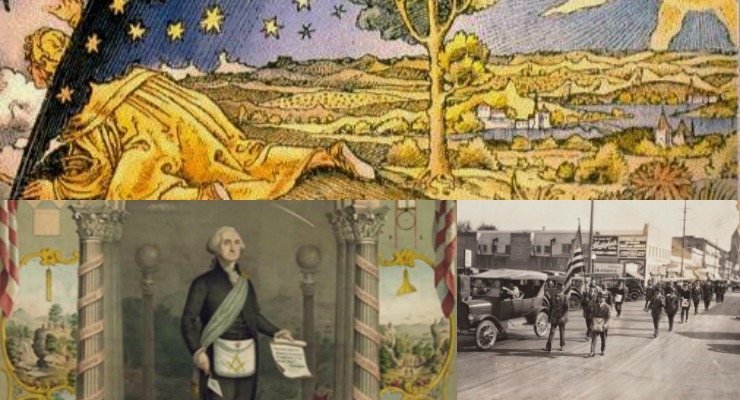 How many of us understand what Hermetic thought is, beyond the idea of “hermetically sealed”?

Some time back I attended a lecture, presented by a lodge here in Southern California, by Dr. Stephan Hoeller, the Gnostic “Bishop” of Los Angeles. His title, I assure you, is not a pun or insult, but a very fitting description to a very intelligent man.

The lecture was on The Hermetic Foundations of the American Republic, which essentially suggested that the ideas and efforts of the founding fathers were the result of a broader subcurrent of the intelligentsia within society and whose ideas manifested themselves into the early documents and foundation of the American Republic.

But first, a note on Hermetic thought

A tradition of knowledge said to date into Ancient Egypt, Hermetic thought is associated with the god Thoth, who the Greeks later related to Hermes. Thoth’s title (one of many) was three times great, which the Greeks translated to Hermes Trismegistus or the thrice great Hermes, and who is believed to be the author of the Emerald Tablet, and Asclepius, within the hermetic texts.

It’s thought that Hermeticism flourished in ancient Alexandria, but moved underground and fell out of common knowledge with the fall of Rome and the onset of the middle ages.

The Renaissance brought about this resurgence of knowledge, including a rediscovery of Hermetic texts (see the Hermetica: The Greek Corpus Hermeticum and the Latin Asclepius in a New English Translation, with Notes and Introduction

), brought to Europe by the Medici family from sources in Byzantium. What these texts contained were ancient ideas of wisdom that talked in detail about a dual nature to man and his pursuit to unify them. The two sides were made up of a human lower self that includes feelings, thoughts, sensation, and ego, the human traits we recognize today. The other half consisted of the spirit, that intangible, ineffable thing that gives us that higher conscience. Its efforts were to cultivate the conscious coming together of the initiates self with his spirit.

The idea within Hermetics was the joining of the two, the transformation of two separate elements into a new one. Some believe that Hermetic tradition survived the fall of Rome and the middle ages in the mystical field of Alchemy, which has existed in different forms for many centuries.

With the dawning of the Renaissance, so too brought the return of Hermetic thought which began to seep into Christian tradition. This movement was quickly stamped out by the doctrinal inquisition, which has since walled itself off from and philosophical idea of a personal God consciousness. Some examples of this era of sanitization of this transformative self, he suggests, could be seen in the extermination of both the Templars and Cathars in France. But again, the ideas did not die, nor were they eradicated. The Hermeticists moved underground into the “secret societies” of the age, two of those societies were the Rosicrucian’s and the other was Freemasonry.

One of the traits of Hermetic study was a progression of steps, or degrees, where the initiated would learn different aspects of the knowledge slowly to cultivate the eventual merger into the self, which was the physical and mental awakening of the God conscious, epitomized in the phrase “Know Thyself.”

So this unconscious cognition moved though Europe finding a receptive home in England where it was nurtured and incubated amidst revolution and religious freedom, away from the Catholic Church.

So what does this have to do with the foundation of America?

Many of the ideas, inherent in the fabric of our country within our constitution, have direct connections to the tenants of Hermetic thought. One such connection is the separation of Church and State. Hermetic tradition says that the individual chooses his path to the divine, and is not directed or influenced one way or another. Freedom of religion here is a direct extension of this idea, that the state is the vessel of the people and should not dictate one faith by presuming authority of one faith or another. The initiated must find his self and not be told where or what it is.

And lastly, the three branches of government work in conjunction of opposites striving to find a balance for the good of the body, the ultimate attainment of the self.

The lecture made some interesting links and offered some tantalizing food for thought. Somewhere within our collective body of knowledge, behind the fog of memory, lay the history of Freemasonry.

Works by Dr. Stephan Hoeller include:

END_OF_DOCUMENT_TOKEN_TO_BE_REPLACED

Raised to a Master Mason in 1908, at Harmony Lodge No. 17 in Washington, DC, Carl H. Claudy  served as the Master and eventually as Grand Master of Masons … END_OF_DOCUMENT_TOKEN_TO_BE_REPLACED

In this final installment of the Faith Hope and Charity series, we consider the symbolism of charity, or perhaps better called love. It is this attribute that … END_OF_DOCUMENT_TOKEN_TO_BE_REPLACED

In this installment of the Symbols and Symbolism of Freemasonry, we examine the text of Albert Mackey's Encyclopedia of Freemasonry on the symbolism of … END_OF_DOCUMENT_TOKEN_TO_BE_REPLACED

In this installment of the Symbols and Symbolism of Freemasonry, we consider a reading of Albert Mackey's text on the subject of Faith as it pertains to … END_OF_DOCUMENT_TOKEN_TO_BE_REPLACED