Was there an epoch event that caused us to change? Actually, Yes, I believe so.
BRYCE ON MORALITY 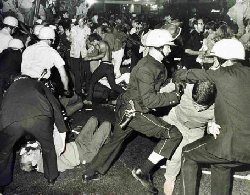 Following the publication of my book, “Stand Up for MORALITY,” I was asked by a reader why there is a disparity between the moral values of yesteryear and today. Was there an event that caused it? I can only offer a theory as to the cause, but first let’s consider some fundamental differences between then and now:

Many years ago, declaring bankruptcy was considered a disgrace, now it is commonplace and a convenient way to avoid paying your bills. Over the last 100 years, bankruptcy in the United States has slowly climbed. It began to accelerate in 1980, when there were less than 500K filings, and skyrocketed to its height of +2M in 2005. True, bankruptcy will affect your credit and future ability to use money, but it has become the escape hatch of choice for people inundated with loans or bills. Declaring bankruptcy may get you out of the hole, but it certainly will not help your creditors.

Divorce was considered scandalous for many years. Attitudes change though and the 1970’s marked the decade where the divorce rate began to skyrocket.

Pregnancies out of wedlock were also considered a family disgrace. Since the 1960’s though, it has steadily increased. For example, in 1980 18.4% of all births in the United States were to unmarried women; in 2007 the rate was nearly 40%.

Being unemployed was considered a black mark against a person, particularly if you were fired. Not so anymore, primarily due to the financial instability of our economy.

It used to be, the very idea of accepting charity from anyone was considered an embarrassment. Not so anymore. Today, over 100 million people accept federally funded welfare.

Female-headed households has grown considerably since 1960 at about 8% of households to 23% by 2000.

Whereas attending church was considered a natural part of life years ago, attendance has steadily declined since the 1960’s.

So, what caused these changes? My theory is it was the cultural revolution of the 1960’s where attitudes and values began to change. This is the decade where young Americans protested the Viet Nam war as opposed to supporting the military as their parents did in World War II. It was also the decade of civil rights, of protesting how we were treating the environment, of burning and looting downtowns, and where Yippie power turned the 1968 Democratic convention upside-down. Places like Chicago, Watts, Newark, and Selma became icons of disturbance in our country. And it was a decade marred by political assassinations triggered by social change.

The 1960’s was also a decade where a counterculture of drugs emerged; where people like Timothy Leary encouraged young people to “turn on, tune in, drop out,” and people like Dr. Benjamin Spock encouraged parents to give their children more freedom and independence as opposed to discipline and teamwork. It was a decade where our music changed, and the words accompanying it reflected the mood of the young people, of protest and change. Thanks to the space race of the 1960’s, our technology changed in leaps and bounds, and the electronic media became a dominating influence in our society. And it was a decade where lawyers dismantled old customs in our culture, such as the classroom, and people began to question if God really existed.

Because of the 1960’s, all of the attitudes and values of our parents were challenged and a new libertine era of permissiveness was born. We lost respect for our government, our institutions such as schools and churches, and the concept of conformity. It was an era where we tried to “beat the system” and reinvent America. We revolted with youthful exuberance, but interestingly, most of us didn’t know it at the time.

I can think of no other reason for such dramatic changes in moral values than the 1960’s. It was fascinating to live through, but we had no idea of the sweeping changes it would have on the personality of the country.