You are here: Home / Featured / The Age of Darkness

– Are we still seeking truth and knowledge, or are we pacified by the status quo? 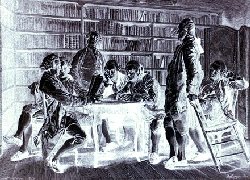 The “Age of Enlightenment” was a period beginning in the 17th century where people began to question the status quo through discussion and reason. This led to many scientific discoveries and fueled the arts simply because people were encouraged to challenge the status quo and exchange ideas. Such discourse was made possible through free speech and the proliferation of the printing press thereby providing a convenient means to record ideas and convey information. Freemasons also had a role to play in this, although historians might argue otherwise, by providing a venue for the thinkers of the day to meet and talk. Some of the principals of this movement included Voltaire, Montesquieu, Franklin, Jenner, Mesmer, Mozart, Haydn, and Frederick the Great, all of which were Freemasons in search of knowledge. Many others followed and by doing so the arts and sciences were revolutionized, new trade routes were explored, new countries were colonized and founded, commerce and agriculture flourished, and political reforms enacted. It was an inspiring period.

Compare it to the last 100 years where we have witnessed great changes in transportation, business, communications, medicine, and other technologies. We have explored space and landed men on the moon, multiple times. Along the way, we have also been forced to endure several wars around the globe, and survive economic catastrophes. Today, our space program is a mere shadow of itself, our military has been reduced in size to the era of pre-World War II, a religious powder keg still exists in the Middle East, the nation’s economy can be described as fragile at best, and we are still dependent on other countries for energy. We have also witnessed some not so subtle changes in our government and the media, suppressing the exchange of ideas, thereby challenging our freedoms. The Age of Enlightenment has been replaced by paranoia. Others now dictate what is proper for discussion and enforced by the spin of the media or by autocratic rule. Political correctness tempers our tongues and forces people to accept the status quo. Even the Masons now fear censorship for discussing subjects not approved by their grand jurisdictions.

Today, we could convincingly argue we are embroiled in an “Age of Darkness” where people are forced to go underground to whisper their views and ideas. Bureaucratic rule and excessive laws are aimed at regulating the behavior of people, not to protect their freedoms. Is such rule needed to control an overly populated planet, or is it nothing more than a zeal for domination? I suspect the latter. Instead of being allowed to ask questions, we are now expected to accept everything at face value by the government and the media. This does not bode well for people seeking enlightenment. I can appreciate the need for secrecy on certain matters, but I value candor more, where we seek and learn the truth as opposed to being treated like cattle.

When “Duck Dynasty” star Phil Robertson made his views about morality known in an interview for GQ magazine, including homosexuality, the media called it “shocking,” thereby causing A&E, the network for the show, to suspend him indefinitely. Fans of the show rebelled and forced A&E to lift the suspension. This was not the first time Robertson butted heads with A&E executives who bleeped “in Jesus’ name” during his prayers. This is a prime example of how expression is repressed in this day and age.

Enlightenment represents our thirst for discovery, invention and innovation, and to “boldly go where no man has gone before.” In order to continue our quest for enlightenment, freedom must be safeguarded, particularly the rights of the individual. It cannot succeed under a regime of repression, where Big Brother is watching our every move, listening to our every word, and judging our political correctness. The governing powers understand it is difficult to control people who possess the thirst for knowledge and expression. Consequently, they create an environment to restrain the human mind. Criticisms and different viewpoints are no longer tolerated, just blind faith. New ideas or methodologies for improving the human condition are also not acceptable, just the status quo.

So, where can the thirst for enlightenment be found? Certainly not in our schools where students are only encouraged to memorize facts, not to think for themselves or learn to speak their mind. This makes them more manageable. The thirst can only be found in those who truly appreciate the need for freedom and are willing to fight for it; that we do not simply want enlightenment, but resist all efforts to repress it.

I wonder what our founding fathers would say. In today’s world they would have likely been rounded up, their properties confiscated, and hung in public before they could have written one word of the Declaration of Independence. Such is the fate of those resisting the Age of Darkness.

END_OF_DOCUMENT_TOKEN_TO_BE_REPLACED

Raised to a Master Mason in 1908, at Harmony Lodge No. 17 in Washington, DC, Carl H. Claudy  served as the Master and eventually as Grand Master of Masons … END_OF_DOCUMENT_TOKEN_TO_BE_REPLACED

In this final installment of the Faith Hope and Charity series, we consider the symbolism of charity, or perhaps better called love. It is this attribute that … END_OF_DOCUMENT_TOKEN_TO_BE_REPLACED

In this installment of the Symbols and Symbolism of Freemasonry, we examine the text of Albert Mackey's Encyclopedia of Freemasonry on the symbolism of … END_OF_DOCUMENT_TOKEN_TO_BE_REPLACED

In this installment of the Symbols and Symbolism of Freemasonry, we consider a reading of Albert Mackey's text on the subject of Faith as it pertains to … END_OF_DOCUMENT_TOKEN_TO_BE_REPLACED