There is no more interesting series of incidents attached to any of the allusions of our Masonic ritual than that which links the tutelary guardianship of the lodge to the Holy Saints John.

The many Masonic references to these venerated patrons certainly call for clearer definition that we receive either from ritual or monitor, and naturally direct our minds to the questions of why their names should be applied to the lodge at all, the origin of the name itself, the association that we so continually encounter in Masonic symbolism of the two Saints John with the two parallel lines, one on each side of the point within the circle, and finally the descent of this symbolism from anterior forms, if any can be traced.

Laying aside all detail for the specialist, we must consider the enormous volume of substitution that was found necessary by the early church to adapt time–honored pagan rites and ceremonies to the new order.

When the Ancient Mysteries were taken under the protection of the Roman hierarchy and diverted into the channels that have led up to their preservation in their present form of Freemasonry, it was probably deemed expedient to replace the characters of the two Hermes by others more in keeping with the new faith. Thus, all the Masonic applications of the two Saints John may be found in the ancient employments of the planet Mercury as a Mystery symbol.

The ancient Babylonian pyramid temples of seven steps or stages, although each stage was dedicated to a different planet, were generally consecrated, like the great Babylonian Temple at Borsippa, to the god Nebo, who is this same alternate morning and evening star.

The temples of the Phoenicians, especially the great prototype of King Solomon’s Temple at Tyre, were dedicated to the two Hermes under the names of Baal and Melkarth, or Apollo and Hercules, to whom were sacred the two most critical moments of the year, the solstices .

The two parallel lines of Masonic symbolism are nothing more nor less than hieroglyphs of the pillars of the porch, while the point within the circle is the most ancient emblem of both the sun and the metal gold, symbolic of the sun’s light. They were also often represented by two serpents or two fishes, moving in opposite directions.

As the axis of our earth is always comparatively vertical to the ecliptic, as we travel on our annual course round the sun, the ancients, who knew this from observations, symbolized it by erecting 12 vertical pillars or dolmens round a central altar fire, representing the sun. These were the earliest places of initiation; but as their principal use was to locate the precise moment of the solstices by their shadows, as temples grew more architectural and ornate, only the solstice pillars were preserved and dedicated to Hermes. This must have been done, when the sign of Virgo, the “Day House” of Mercury, stood for the great Mother of Nature, as from B. C. 6155 to 3995, the earth was in this sign, and the sun in the opposite sign of the Fish at the winter solstice, while, at the summer solstice, the reverse obtained.

Egyptian Scarabs four to five thousand years old shows the importance of the symbol of the two fishes.

It is curious that the name of “John” should conduct us to this very circumstance; for ‘it is a derivation from the age old name of Oannes (Ea-Han), the name given by the Ninevites to this same planet Mercury, who, thrown out of the ship (falling below the sun as the latter passed through the sign of the Fish), disappeared, only to rise again triumphantly and become a teacher of men. The uncovered ruins of Nineveh are everywhere carved with colossal statutes of Oannes the Fishman, whose tradition, as the first instructor of men in the arts and sciences, reached the Tyrians as that of Dag-On, “The fish of the getting sun,” and the Hebrews as Jonh (translated “Jonas” or “Jonah”). As the ancients saw the sun nightly sink in the west, far beyond the Straits of Gibraltar, they called the two promontories that flank it the “Pillars of Hercules”; by which names they are still known. The cabalistic meaning of Jonh is Jock; Vau, Heh; and the letter Nun, which means “a Fish.”

The Egyptian also dedicated twin pillars to Osiris and Isis, the signs of Leo and Virgo, whose son Horus is but another form of Hermes. They called that of Osiris “Strength” because it represented the power of God-which is “Hercules” again.

The pillar of Isis they designated “Establishment,” which referred to Nature, that which is set up and maintained by God’s power, whose husband-son is the alternately dying and reviving divinity.

Among the Hebrews the sign of Isis, Virgo, the widow of Osiris and mother of Horus, was of the tribe of Naphtali, while the sign of Gemini was the tribe of Levi, from which sprang the two brothers Moses the warrior and lawgiver, and Aaron the High Priest, equally representative of the dual principle for which the two Hermes stood,-spirit and matter, the divine and the mortal.

So the two Holy Saints John, the one purely material and the other purely spiritual, were taken by Christian symbolists to personify the age-old Mystery of regeneration. 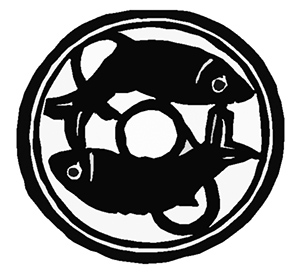 The symbol of the two fish, as they appear among the Chinese and ancient Peruvians.