The employment of twin pillars or posts at the threshold of edifices dedicated to religious purposes is a usage of the greatest antiquity. Even the original intention of church steeples was not expressed in a single one, as we so often see today, but in two, as the latter had once the same significance as the pillars.

A great volume of literature has attempted to give the pillars a purely phallic significance; but the writer has found many reasons for believing this to be an exaggeration.

Among all primitive peoples a pillar erected in the center of a convenient open space served as a gnomon, through which the daily, monthly, and annual aspects of the sun might he taken account of. The interpretation of the shadows cast by this pillar developed into quite a science, and was always the principal occupation of the priestly caste, which learned thereby to predict the approach and departure of the seasons correctly, thus making their wisdom indispensable to the pastoral and agricultural peoples whom they served. On the day of the summer solstice, at noon, when the sun stood vertically overhead, the Peruvians said that their god “sat upon his pillar.”

As experiment succeeded experiment, perhaps over many centuries, it was discovered that a far greater range of solar phenomena could be registered through comparison of the shadows of two of these pillars, placed at some distance apart.

All of these discoveries were kept locked within the breasts of the erudite priesthoods and constituted the real secrets that our ancient brethren were pledged, under fearsome penalties, to keep and conceal among the initiates of their own peculiar orders.

Many ancient Temple courts were paved with a pattern of alternate white and colored tiles, like a chessboard, over spaces carefully measured so as to extend “one-third longer from west to east than from north to south.”

The two pillars or obelisks (the latter the favorite forms in Egypt) were placed at the northeast and southeast corners of this paved work so that when the sun rose on the morning of the summer solstice, it rose apparently in the northeast corner of the universe (which for other reasons was also considered as an oblong, 3 x 4 in dimensions) and the shadow of the corresponding pillar cut the court diagonally ; thus describing the hypotenuse of the Pythagorean triangle (3-4-5 ), which was dedicated to Horns in Egypt, Bel in Chaldea, and Baal in Phoenicia and Syria, all the same god of fertility and increase as well as patron of the liberal arts and sciences. 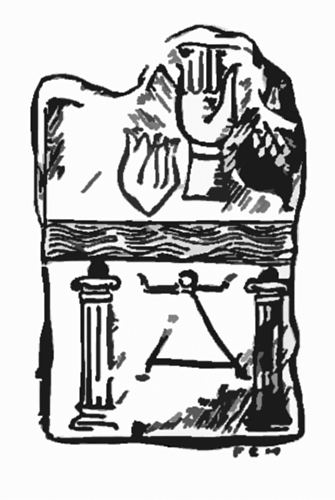 Phoenician stele of B .C. 1000. showing pillars, lily and pomegranate.

All these ideas are embodied in the reproduction of a Punic stele (Phoenician monument) now preserved in the Bibliotheque Nationale of Paris. The human hand with extended fingers symbolized this number 5. The lily on one side was an emblem of Astarte or Isis, and the pomegranate, which, aside from the exuberance of its seed, exhibits as a transverse section a five-pointed star, an additional symbol of the Baal below, seen soaring between the pillars.

With this picture we are able to contrast the well-known Masonic symbol of the point-within-the-circle between the two parallels, which is nothing less than a hieroglyph of the foregoing figure. The sun, either as a plain or winged disk or represented by one of the various Baal or Horns figures of the ancients, is supposed to be seen at a distance from between the two pillars, just as the resplendent letter in the end of the lodge room would appear from the preparation room.

The eventual location of these twin pillars, in the west, arose from several causes. By the time the astronomical lore of the Chaldeans was ready to migrate to western Europe under the name of Druidism (the Druid priests were still called Culdees in Ireland), it had been ascertained that the axis of the earth always maintained a semi-erect’ position during its migration round the sun, and the ecliptic had been divided into the 12 equal parts or signs, corresponding to our months,, that still obtain. This was symbolized everywhere by circles of 12 erect stones, with a fire altar in the center to symbolize the sun.

The pillars of the west have ever marked the scene of the nightly tragedy of the loss of light and the annual one of the death of nature . They are termed the Pillars of Hercules because of the scene of the descent into Hades which constituted the last of the “12 labors” of this ancient year-god. His very name of Hr-akleos shows him to have been the “ignoble,” “poor,” “needy,” or “unfortunate” Hermes, also typified by the blind Samson (Shamash-On) who precipitated the destruction of the lords of the Philistines, by seizing the pillars against which he leaned. The two promontories, Gibraltar and Ceuta, marking the westernmost extension of Europe, were called the “Pillars of Hercules” by the Phenecian sailors, and their symbol has, through a variety of associations, become our American dollar mark ($) of today. 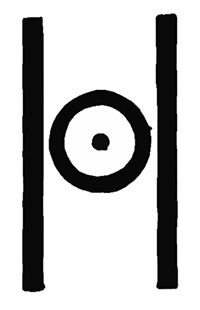 The globe tops of the pillars represent indifferently “heaven and earth” or the “sun and moon,” through an esoteric or hidden meaning which has accompanied them from their original home in northern India.

The special allusion is to the “dual principle,” in which the right-hand column represents Purusha, the male principle (Sanskrit – a complex concept whose meaning evolved in Vedic and Upanishad times. Depending on source and historical timeline, it means the cosmic man or it means Self, Consciousness, and Universal principle), and Prakriti (in Vedanta – the prime material energy of which all matter is composed), the female principle, of human nature, worked out on a mathematical basis.

There is no possibility of present-day belief that these pillars originated with the construction of any King Solomon’s Temple at Jerusalem. They are represented on too many monuments of far greater age for this to be the case. In Tyre they stood before the great temple of Melkarth, the Tyrian Hercules (Hiram, King of Tyre). In Egypt they represented Osiris (strength) and Isis (establishment) . An Egyptian amulet in the writer’s possession shows the Egyptian god Bes, representing Osiris, as the Syrian Baal approaching from the east through the two pillars, his head surmounted by the three plumes that symbolized the letter G—this also being an age-old cabalism, and not a modern symbol as many suppose. The Egyptians also called these pillars the “Pillars of Set” or Typhon, with reference to the western Hades of which we have already spoken. 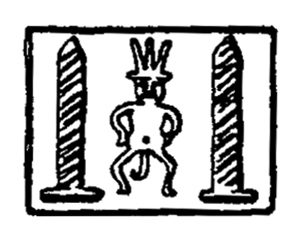 Finally, the true Hebrew spellings of these pillars are “IHIN” and BOAZ, which words, to be properly understood, must be halved into IK-IN and BO-AZ, translated into their numerical equivalents, 30-60 and 72-8. When multiplied together, the first will give 1,800 and the second 576 ; which, again multiplied, give 1,036,800, the precise length of 10 Hindu Kali-Yugas or great cycles in solar years and a number of other wonderful facts connecting the Sod, or secret doctrine of Israel, with the ancient Hindu gnosis; while the digits 3, 6, 7. 2, and 8 of the two words added together produce 26, or Jod, Hch, Vau, Heh. 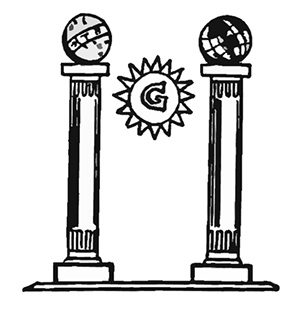