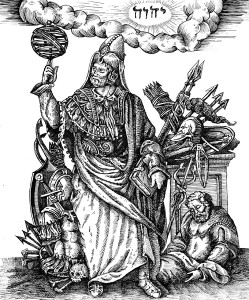 There is no place in Masonry for dogmatic controversy affecting the current convictions of brethren of the craft. In its highest contemplation Freemasonry solely regards and addresses itself to the “Great Architect of the Universe,” respecting the Names under which this Unique Identity is apostrophized in every clime, by every race, and by every school of thought.

There are no religious differences attached to the adoration of the Supreme Being. Men differ alone with respect to some of His manifestations of love and solicitude for humanity, malting claims to an exclusiveness in one respect or another, which are too often the outgrowth of fast-vanishing racial isolation and the diverse trends of thought consequent upon differences of origin, climate, and environment.

In quibbling over these differences, so frequently the result of misunderstandings of identical premises, viewed from diverging angles, men are too prone to forget that the goodness and providence of Almighty God is forever pouring in a mighty deluge upon us, manifesting itself unceasingly and impartially in everything that either experiences or can be experienced . From the selfish standpoint of the unintelligent ego, each individual is alternately blessed with satisfactions and cursed with deprivations or distresses, the extremes predominating in many instances without apparent reason. Many of the ancient philosophers, therefore, taught that man could attain supreme contentment only by realizing his identity with the All. Sensing this, he perceived the resistless operation of the great laws of Being, in perfect poise, harmony, and impartiality, requiring only to be heeded for man to escape the evils and enjoy the benefits thereof during his allotted term, the accidents and mishaps befalling him not being subject to the caprices of an unpropitious Ruler, but consequent upon his own unguarded collisions with unchangeable law.

Therefore the whole problem of human life became the attainment of greater and ever greater knowledge of the natural law, upon which all progress and all security to life and happiness depended in so eminent a degree, and the divine gift of the reasoning faculties, which rendered this possible, was appreciated as God’s most precious blessing to man. Thousands of years of experiment and ceaseless vigilance on the pert of eager watchers have never resulted in the detection of a single principle so unrelated to the rest of the universal machine as to have no dependence upon it. Even where the wonders of science have disclosed marvels so intricate as to baffle explanation or analysis, they have at least proved so entirely subject to certain conditions of known factors as to be easily provoked into manifestation or suppressed from view, at the will of man.

Year by year, day by day, hour by hour, minute by minute, the infinite details of this great cosmos-pervading law keep on unfolding to human perception, filling all space with their greatness and mocking pursuit in their ultra-microscopic perfections and yet nothing is discovered that had not existence ages before the human mind began to concern itself with its intricacies . The capacity of mind to see and understand has limitations and history-that of which it takes cognizance through the medium of the senses-is limitless and without historical beginning or end.

Every past age has attempted to place bounds upon that which it is legitimate for man to know or think he knows about the origin and constitution of the wonders about him. Each era has closed its book of human knowledge with a flaming “Finis” at the end of an ultimate chapter, and yet the dawn of every other day has ushered in new wonders, new visions, and new truths.

“Dogma” is the name given to all these futile finalities which do not finish, to the barbed wire entanglements and chevaux de frise set by each generation at the limit of its attainments, in the vain thought that the “End” had been achieved.

In most cases dogmas will be found to revolve round the privilege of classes to rule masses, irrespective of the fact that part of the cosmic law is as sure and continual an oxygenation of the sea of humanity by waves of upheaval as is manifest in seas of water, in which that which is the sluggish depth of today may be the foam-crested wave of tomorrow. Yet the mind of man, framed in the image of the Creator, even as the receiver of an acoustic instrument must be attuned -to the vibrations of the transmitter, that the message may be received as it is sent, has discovered constant and unchanging elements in this stupendous order of varied manifestations, has discovered chaos-banishing laws which must be the same in an atom as in a sun, and so may be exhibited in symbols of dimensions convenient to the stature of contemplative man.

Such are the symbols of Freemasonry – evidences of the truth attributed to Triple-great Hermes, the mystic founder of our craft, that “that which is above may be discovered by examination of that which is below.”

The Masonic student may concern himself with every branch of research that is capable of throwing light upon the causes that have led men to crystallize their perceptions of immutable law in emblems and symbols. He may pursue each of the various paths of investigation indicated by the obscure phraseology of ritual until he emerges into the full blaze of Masonic light embracing its fundamental truth. He may unravel the intricacies of ancient philosophies and mythologies, in order to convince himself of their ultimate source in the fountain of revealed wisdom, and he may set his own value upon anthropomorphisms or the embodiment of attributes and principles in fleshly guise, so that what really are the play of natural forces, the sport of the elements, the cycles of worlds, are described in terms taken from the vocabulary of human life. Yet, with all this, he may not consciously offend his brother, by striking at the latter’s highest individual spiritual contemplation in a humor of disdain or ridicule. Each mind is a universe in little, a cell of the universe in great, one as eternal as the other, and subject to the same law of gradual un-foldment. Some day we shall all know the intricate and the complicated as we at present know that which is simple and few of parts; but of the infinite aggregate, the unfathomable indivisible total, our Masonry teaches us the value. NOW.