Its been variously reported that Jared Loughner, the Arizona shooter who killed 6 people in his attempt to assassinate Arizona U.S. Rep. Gabrielle Giffords, had a sinister occult shrine in his back yard beneath a tarp.

The photos are inconclusive as to their occult implication, but it does offer a glimpse into a violent paranoid delusion that Loughner operated under. The “shrine” as its being referred to as, consists of a fake painted plastic skull nestled in a pot of blackened shriveled oranges, and a dish with what looks to be old burned out incense ash. Besides the alter on the left sits a bag of what looks to be a popular plant fertilizer. While on the right is a collection of three used tall votive candles. You can see a Sideshow with the images here. 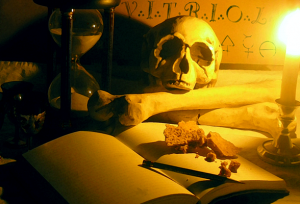 Together, these items have been reported as collected in a make shift camouflaged tarp draped space nestled in his back yard. This collection of oddities sounds, in some respect, to be reminiscent of a Chamber of Reflection, which was brought to mainstream awareness in the Dan Brown book The Lost Symbol, when was used as a place of meditation under Washington D.C. by Masonic politicians.

In tradition, occult or otherwise, the Chamber of Reflection is a meditative space made use of to reflect on mortality and our link to the inner self. Its use in some Masonic ritual is as a space to meditate and contemplate our connection to deity, something that Loughner was said to abhor as he was a professed atheist and nihilist.

The media has been suggesting that this configuration of items is linked to “occult groups” but fails to mention what any of these ‘groups’ might be. My guess is that there is a suggestion that the shrine has some nefarious links to perhaps a Satanist group (remember the Satanic Panic of the 80’s) or some other death cult (of whom there are a few deities) – but from research, its hard to link his exact configuration to any particular occult group’s use besides it merely being a plastic skull atop a pile of moldy oranges.

Star Foster from the Pagan Blog at Patheos, agrees saying that the jumbled collection reminds her of “Only sadness. Mainly sadness because we are so prone to try to paint this murderer in shades of “the other” so we don’t have to contemplate any way he might be similar to us.”

It strikes me that if the news wasn’t so interested in latching onto the media/political implications made early on by Pima County Sheriff Clarence Dupnik (Palin’s cross hairs, the Left wing agenda, etc) that it would of been and easy jump onto the occult implications of it simply from the presence of the shrine.

From another end of the spectrum, somehow David Icke has been thrown into the mix as a contributor to the politico-media hype, by the Southern Poverty Law Center, which seemingly opens the door for a wider examination including MKUltra Mind Control from the likes of Alex Jones who is leading the charge to say that the political rhetoric is backfiring back on to the Left-wing media finger pointing press.

Without much question, what Jared Loughner did was insane, which will likely be his defense when he goes to trial. Was it mental instability, plain just wrong headedness, mind control, or occult forces is for a jury to decide. Most likely the backyard shrine had little link to the decisions that led up to the pulling of the trigger that day – if it says anything to the tradgey of his actions at all. I doubt that anything will come of the shrine, or the mind control accusations, because ultimately Loughner was in control of his own mind and chose, no matter how darkly, what to do with it.

One thing that can be said for the shrine, if it is along the lines of a Chamber of Reflection, then Loughner failed to make proper use of it and instead perverted much the same way he did in his actions on that tragic Saturday.