You are here: Home / Featured / Is CoMasonry The Antidote? – Part 1 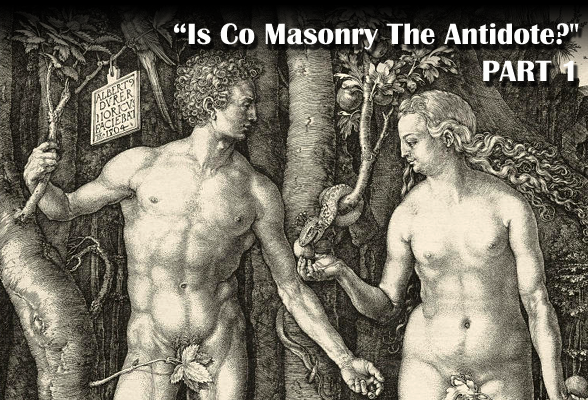 While listening to an alarming expose on the declining of membership of “Regular” American Masonry and its apparent inexorable demise, I could not help to wonder if that which has been prohibited, the admission of Women into our Order, is not precisely what and whom we need to insure our survival, and, most importantly, to genuinely live up to our Sacred Principle of Equality. As I gathered my thoughts later on that night, I began to gradually immerse myself in my humble essential library, and proceeded to read, compile, and eventually mold my sentiments and commentaries on paper. The following essay is the result of various sleepless nights that began that same evening.

The eagerness to know the Self and his/her Objective and Predominant Surrounding, in order to achieve Self-Transcendence, is one of the peculiar characteristics of human feeling, thinking and acting.

The perennial problems that Humanity has endeavored to resolve since its very origins, are all alike in their roots, though their solutions have been adapted to “the spirit of times”, that is to say, to the appropriate conditions of a particular civilization in a determined time and place.

Since immemorial times, there have existed ritualistic practices exclusively for men, for women, and/or for both.

Nowadays, it has become frequent to observe the rediscovery or resurfacing of Ancient Schools of Thought and Initiatic Organizations engaged in new ways of understanding and implementing (esoterically and exoterically) the Traditional Science. Among these organizations and schools, Organized Free-Masonry distinguishes itself as the most important of all Initiatic Institutions in Western Europe, America and parts of Asia and Africa.

All these aspects – without prejudice to others that are also worthy of consideration – should be kept into account when asking ourselves and others the questions: “What is Masonry?”, and, “What is Mixed Masonry or Co masonry?”.

As we now begin to reflect, with the purpose of building for ourselves and others the most objective possible vision of what Free-Masonry is in general, and Mixed Free-Masonry or Co masonry in particular, we must try to answer, with the utmost honesty, the following three questions:

Is it possible, at this point in time, to conceive a Free-Masonry integrated by Lodges of Women, of Men, or, of Mixed Gender among which there can exist a broad respect to their particular preferences of initiatic realization, while, at the same time, having full conscience that they ALL are part of an unique and indivisible entity known as: Universal Free-Masonry?

Ever since humans left behind their nomadic conditions and became sedentary, they started to manifest their attitude toward advancement and their aptitude for construction. In fact, Construction is one of the most evident characteristic signs of Civilization in all epochs and cultures; However, with respect to determining its objective origins, History is irremediably mixed with Myth, arriving sometimes to some unsuspected extremes.

Charles Bernardin (1860-1939), notable Masonic Historian and member of the Supreme Council of the Grand Orient of France, was able to compile and prove the existence of 206 authors who contended and presented 39 divergent opinions on the origin of Masonry. Amongst these opinions, the most admiration-worthy are the following:

When some poorly informed people – Masons and Non-Masons – blindedly reject the possibility of a Woman being eligible and/or worthy of Masonic Initiation, whether it be in a Feminine Lodge or a Mixed-one, one cannot help to “sketch” a light smile; for it is clear, even by the accounts and terms of Profane History, that women, in their individual capacities or through their membership in diverse guilds of spinners, weaveresses, carvers, upholsterers, sculptresses, etc. have taken active participation in the Divine Art of Architecture.

Some evidential facts that support the above statement are the following:

On another hand, among those possible feminine receptions of “Accepted Masons”, like those narrated by ancient medieval “Duties” and “Charges”, we can include those of the Masters’ wives, since these “Bylaws” make an invariable reference to them both:

The publication of this manuscript was prior to that of “Anderson’s Constitutions”, and it has been found to be more trust-worthy, in light of its antiquity and uniqueness – since in 1724 (seven years after the creation of the alleged “First Grand Lodge”) Anderson simply made a synthesis of various documents, some of which were even second hand; whereas in the case of our aforementioned manuscript, we are in the presence of an unique and complete document. And with respect to the evoked “Mistress”, we can all admit that Sabine de Pierrefonds, artist and sculptress, had to, at the same time, form/train Apprentices and Companions (Fellow crafts). Later on, in due time, the benefits of this Feminine Initiation into “Accepted Free-Masonry” were extended to a female monarch: Queen Anne Stewart, Daughter of James II, who ruled between 1702 and 1714.

To be continued in part 2

END_OF_DOCUMENT_TOKEN_TO_BE_REPLACED

In this installment of the Symbols and Symbolism of Freemasonry, we consider a vital emblem of Freemasonry, the compass or compasses. Albert G. Mackey, in his … END_OF_DOCUMENT_TOKEN_TO_BE_REPLACED

Raised to a Master Mason in 1908, at Harmony Lodge No. 17 in Washington, DC, Carl H. Claudy  served as the Master and eventually as Grand Master of Masons … END_OF_DOCUMENT_TOKEN_TO_BE_REPLACED

In this final installment of the Faith Hope and Charity series, we consider the symbolism of charity, or perhaps better called love. It is this attribute that … END_OF_DOCUMENT_TOKEN_TO_BE_REPLACED

In this installment of the Symbols and Symbolism of Freemasonry, we examine the text of Albert Mackey's Encyclopedia of Freemasonry on the symbolism of … END_OF_DOCUMENT_TOKEN_TO_BE_REPLACED